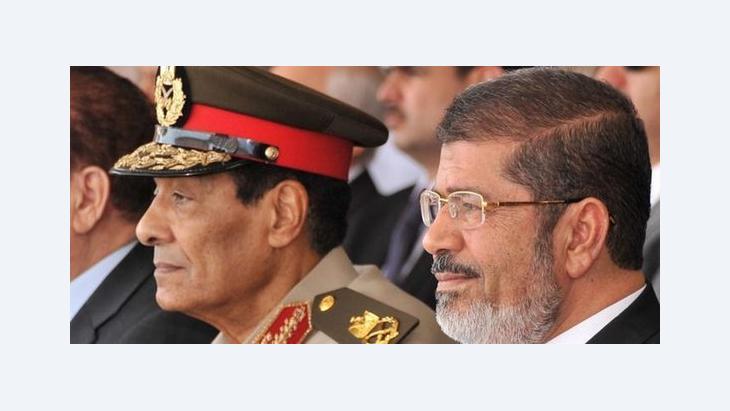 The Supreme Military Council in Egypt Loses Its Power

The Old Guard Steps Down

﻿The political disempowerment of the supreme military leadership in Egypt must be the most important event since the fall of the former president, Hosni Mubarak. For the first time in the recent history of the country, a civilian president has issued a ruling which publicly confronts the military. By Karim El-Gawhary

It was a bold move by the Egyptian president, Mohammaed Mursi. The dismissal of his defence minister, Mohammed Hussein Tantawi, and the military chief of staff, Sami Annan, came as a complete surprise: most political observers had assumed that the two men in the shadows were the people with the real power in the country.

Mursi's move was clever: he exploited the fact that the people were asking all kinds of awkward questions of the military after recent events in Sinai – questions like: where were the officers when 16 soldiers were killed during an attack on an army post? The truth was, they had left their posts to break the Ramadan fast in a more fancy manner than their men.

Mursi's move also succeeded in splitting the military leadership, by involving the members of the Supreme Military Council in its own political dismissal.

Both the new defence minister, Abdel Fattah Al-Sisi, and the new chief of staff, Sidqi Subhi, were members of the Council. By accepting their positions they have effectively accepted Mursi's constitutional declaration under which he is claiming back all those executive powers which the Military Council had awarded itself in its own transitional constitution.

In addition, Mursi has offered high military honours to the generals he has dismissed and has appointed them officially as his advisers, so that the dismissal has been brought about by them upstairs. 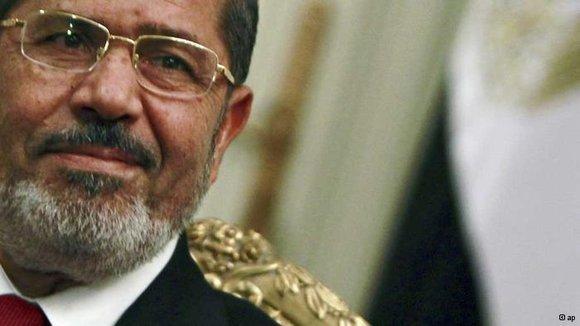 A strategically significant move in the struggle for power with the Supreme Military Council: the Egyptian president, Mohammed Mursi, has restructured the military leadership and is claiming its old powers for the state leadership

​​That ensures two things: firstly, the two will not be touched by the courts, which means that they are unlikely to organise resistance within the army or engineer a putsch.

And secondly, as presidential advisers, they are not allowed to leave the country without the president's permission. At the same time, the current arrangement does not preclude the possibility of legal steps being taken against them at a future date. The fact that the military has taken no steps since their dismissal suggest that Mursi's elegant tactic has paid off.

There are two ways of looking at what has happened. The Muslim Brothers have won the power struggle with the military. But this conflict was also a power struggle between the elected and thus legitimate institution of the presidency, and the unelected, opaque and unaccountable institution of the Military Council. The fact that the elected president has won the battle is also a victory for democratic change in the country.

But the extent of the new powers which the president now has itself presents a danger. Mursi has complete executive and legislative power, as well as the right to call a new constitutional assembly should the existing one fail to live up to its tasks. The big question is: how responsibly will he use his monopoly on power?

A liberal judge as vice-president

Mursi needs wide political support which goes beyond his own clientele in the conservative Muslim Brothers. And in that respect, his appointment of Mahmud Mekki as vice-president is highly significant. Mekki is a liberal judge who was a standard bearer for the judges' fight for an independent judiciary in the last years of the Mubarak regime. His appointment is an important signal to liberal and left-wing elements in the country. 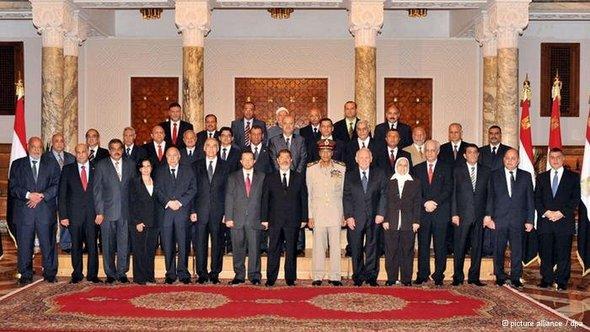 Short political half-life: Egypt's new cabinett was set up at the beginning of August, but already two cabinet members were sacked

​​Now that the military has been booted out of political life, attention will turn to the drawing up of a new constitution. This process can only be successful if it is accompanied by a wide consensus in society. Only after this process can there be elections to a new parliament. And only then would there be a proper separation of powers which would offer the foundation for a democratic Egypt. That road is still a stony one.

But Mursi has now shifted a large boulder from that road, although it had seemed until now to be immovable. It's a remarkable achievement: it took Turkey three decades to remove its generals from political life. Egypt has sent its general into the desert just 18 months after the fall of Mubarak.

In the Arab world, freedom of opinion collides with a societal juggernaut that silences imagination with remarkable efficiency. Egyptian author and novelist Khaled al-Khamissi ... END_OF_DOCUMENT_TOKEN_TO_BE_REPLACED

This 11 September marked the nineteenth anniversary of the terrorist attacks in New York and Washington. The wide-ranging repercussions of those attacks in the years since 2001 ... END_OF_DOCUMENT_TOKEN_TO_BE_REPLACED

The rise of liberation movements in the Arab World during the 20th century brought with them an array of complimentary works from the creative sector. Sultan Sooud Al Qassemi ... END_OF_DOCUMENT_TOKEN_TO_BE_REPLACED

Two prominent cases concerning gender-based violence – that of Ahmed Zaki, who has been accused by more than 100 women of extortion, sexual harassment, coercion and rape, and that ... END_OF_DOCUMENT_TOKEN_TO_BE_REPLACED

Alexandra Kinias was denied a job as a site engineer in an oil company because of her gender. The rejection letter clearly stated that the company would rather offer its jobs to ... END_OF_DOCUMENT_TOKEN_TO_BE_REPLACED

END_OF_DOCUMENT_TOKEN_TO_BE_REPLACED
Social media
and networks
Subscribe to our
newsletter