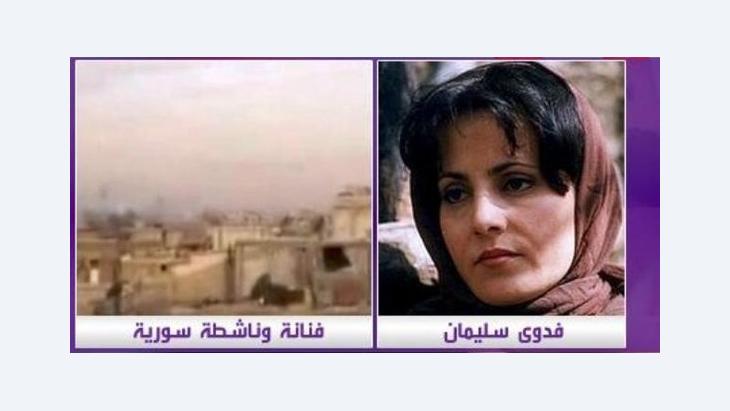 ''I Became A Threat to the Regime''

﻿﻿Syrian actress and activist Fadwa Suleiman was one of the first Syrian celebrities to take to the streets to protest against the Assad regime. She is now in exile in France. Magdalena Ebertz spoke to her in Paris

Before Fadwa Suleiman sits herself down at the Café Le Sarah Bernhardt in Paris, she signals her intention to grab a pack of cigarettes. In a moment she is gone, darting off over the crossing on Place du Châtelet-les Halles.

The initial impression given by the forty-year-old Syrian actress, who has now spent nearly five months in exile in Paris, is one of lively animation, but very quickly this shifts to one of deep pensiveness and finally of anger. She feels, she says, like someone who has just risen from the grave: living in exile makes her feel absolutely powerless, and being forced to follow events in her own country from afar makes her uneasy.

Fadwa Suleiman is one of the well-known faces of the Syrian Revolution. She was one of the first celebrities in the country to take to the streets and demonstrate against Assad.

The actress from Aleppo was already deeply involved in the underground organisation of many demonstrations against the regime as early as 2011; and this despite the fact that she is an Alawite, a member of the same minority religion as the President himself. The intelligence services were aware of her activities, and demonstrators were arrested and questioned on their links to the "trouble-maker" Suleiman.

Videos showing her taking part in demonstrations in the rebel city of Homs found their way onto Al Jazeera and other Arab television channels and were broadcast around the world. "I became a threat to the regime, and they became one to me." On 24 March, Fadwa Suleiman fled Syria, escaping across the Lebanese border. She avoids giving any precise details so as to avoid endangering other refugees. 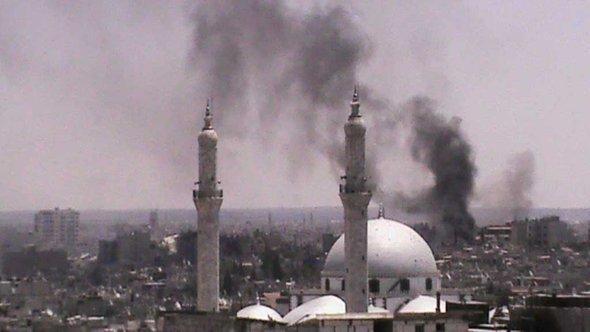 Where violence rules: it is estimated that over 20,000 people have already lost their lives in the fighting between the regime and the Free Syrian Army; Amnesty International accuses regime troops of systematic terror

Not predisposed to an Islamic government

Things have quietened down for her in Paris. When she first arrived in the city, she was out on the streets calling for protest. Nowadays, however, she is no longer active in the city's Syrian exile community and tends to go her own way. It is not possible to influence events in Syria from here, she says, all one can do is sympathise with what is going on in the country.

It is a situation that has her spending a lot of her time on the Internet. She is in regular contact with friends in Syria, usually via Skype, and uses Facebook to let people know what is happening in the country. Contact is often broken off for days or even weeks a time, due to the instability of Internet access in Syria. At the moment she and her husband are writing a book about the "many truths" that they experienced during their two and a half months in Homs.

The book is also about their relationship to religion. In return for being given refuge by a sheikh, an Islamic religious scholar, the couple decided a year ago to go through a religious marriage ceremony, although religious faith is something Suleiman considers meaningless: "for me, faith and religion are always about power," she says, "including political power."

She believes that the Syrian people are not predisposed to an Islamic government – or to an Islamist government for that matter. "Were such a thing to happen, it could only be due to external interference from Saudi Arabia and Qatar." 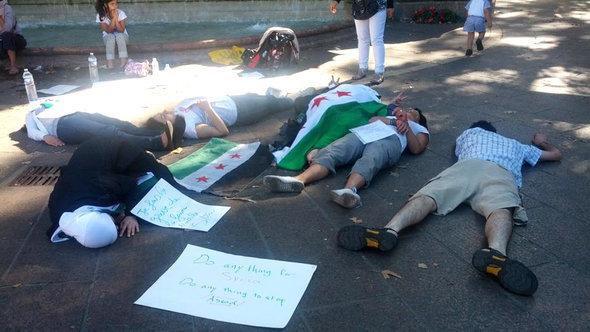 Exile in France: soon after arriving in Paris, Fadwa Suleiman took to the streets, calling for people to protest at the situation in Syria; now, however, she believes that the situation in her native country cannot be influenced by such activities abroad

Appropriation of art by politics

Suleiman also has an ambivalent attitude to politics. Despite her involvement in the Syrian opposition movement, she does not see herself as a political person.

On the one hand, the confirmed pacifist sees the reason for the escalation of the conflict in the fact that the US and its allies chose merely to look on while the Assad regime did its utmost to crush the protests. On the other hand, she is now firmly against any military intervention by other countries.

This is why she has been working for some months now with other like-minded people from Egypt and Tunisia, who are also committed to opposing any Western intervention in the Arab countries, particularly by the USA. The message they want to send is clear – "keep out of our affairs; we can sort things out for ourselves!"

Events in Syria and in other Arab countries are, they feel, playing into Israel's hands, because Israel wants to go on claiming to be the only democratic country in the region. "It is absolutely in Israel's interests that the Arab Revolution fails."

Many Syrian artists are currently working for the rights of ordinary citizens and are concerned by the steadily rising toll of casualties and the growing number of refugees in Syria and its neighbouring countries. Fadwa Suleiman, however, is also worried by the methods employed by the authoritarian regime to appropriate artists and their works for the regime's own purposes. There are also artists who are "products of the regime," she says, because free and critical thinking is something that the regime wants to prevent.

Even the policy of granting small political freedoms (Siyasa at-tanfis), by means of which, during the rule of Hafez al-Assad, artists were permitted to criticise the country, politics and society – at least up to a certain point and as long as no one was mentioned by name – has been gradually eroded in recent years.

By approving and allowing the production of a few television soaps and series in which some freedom of speech appeared possible, Bashar al Assad created the impression that Syria was on its way to becoming a country tolerant of freedom of opinion. In reality, however, such freedom was becoming ever more restricted.

Home
Print
Newsletter
More on this topic
Interview with the Syrian Composer-pianist Malek Jandali: ''We are witnessing the fall of humanity''Missing: the Syrian Film-maker Orwa Nyrabia: The Hunt for Awkward Cultural ActivistsSyria's Ancient Treasures and Historical Sites: Under Threat from Bullets and Thieves
Related Topics
Democracy and civil society, Syrian Civil War
All Topics

Since 2015 there has been a surge of interest in Syrian writing in German translation. In this series of interviews, writers, poets, publishers, and artists in Berlin talk about ... END_OF_DOCUMENT_TOKEN_TO_BE_REPLACED

In his most recent book, "Trust in Divided Societies: State, Institutions and Governance in Lebanon, Syria and Palestine", political scientist Abdalhadi Alijla writes that not ... END_OF_DOCUMENT_TOKEN_TO_BE_REPLACED

Ten years after the start of the Arabellion in North Africa and the Middle East, many view the movement as a failure. But rather than being over, it has now entered a more mature ... END_OF_DOCUMENT_TOKEN_TO_BE_REPLACED

Initial statements by the Biden administration indicate it will follow a carrot and stick policy towards Turkey. Ankara believes its role in negotiations on various issues could ... END_OF_DOCUMENT_TOKEN_TO_BE_REPLACED

Investigations by German federal prosecutors into the evidence of chemical warfare in Syria are ongoing. Deutsche Welle and Der Spiegel gained exclusive access to witnesses and ... END_OF_DOCUMENT_TOKEN_TO_BE_REPLACED

Relations between Ankara and Paris have reached a new low, with presidential communications contributing to the escalation. To describe recent bilateral exchanges as undiplomatic ... END_OF_DOCUMENT_TOKEN_TO_BE_REPLACED
Author:
Magdalena Ebertz
Date:
Mail:
Send via mail

END_OF_DOCUMENT_TOKEN_TO_BE_REPLACED
Social media
and networks
Subscribe to our
newsletter