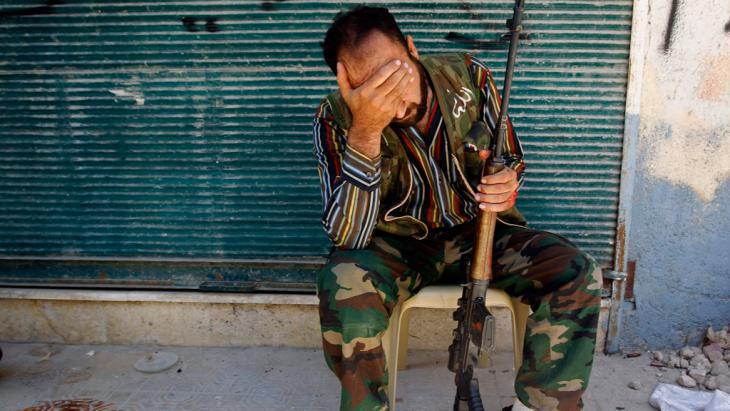 The Syrian conflict and the fight against IS

In Syria, unilateral uncoordinated air strikes against IS (Islamic State) are turning people into victims instead of partners in the battle against terror. If they are to win over the Syrians, the international alliance must treat rebels and activists as allies, says Kristin Helberg

The US-led coalition against the terror group IS is currently losing a key battle in Syria. Not the battle for Kobani, but the battle for the support of Syrians – of civilians, activists and rebels alike.

Instead of giving people the feeling that it is supporting them and fighting alongside them, the US is dropping bombs where it likes and closing its eyes to suffering elsewhere. Instead of co-ordinating with fighters and activists on the ground to identify IS military targets and positions, the US is destroying infrastructure such as oil refineries and granaries. And instead of the oft-cited moderate rebels (Free Syrian Army and the Kurds) being equipped with modern weaponry and instead of their help being enlisted in what could be a simultaneous air and ground advance against IS, the rebels are not even being informed of the targets of these attacks.

The battle against IS in Syria has thus far been conducted half-heartedly and unilaterally, which is why it is not only ineffective, but actually even counterproductive. The more people start to believe that the air attacks are in reality a war against Islam or the Sunnis, which not only spares Assad but which has been secretly agreed with him, the more people will be persuaded to join the ranks of the terrorists.

Why is this the perception of so many Syrians? It is quite simple. Europeans and Americans are implementing a selective policy in Syria, reacting to some things with horror and vociferousness, and to others with indifference and silence. Moreover, they are doing so in three respects. 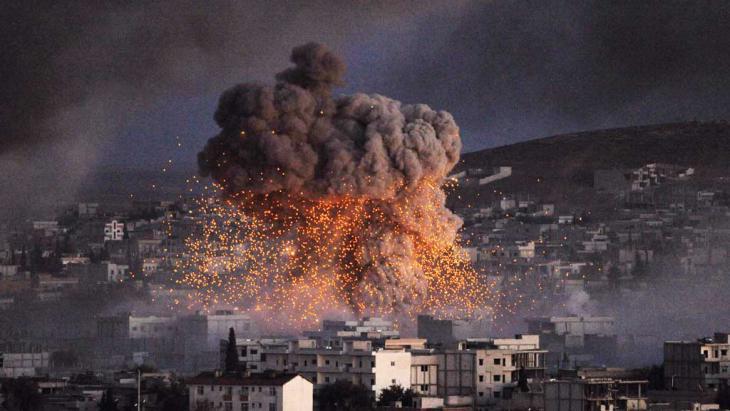 An explosion in the city of Kobani after an IS suicide bomb attack: the Kurdish city of Kobani is under siege from Islamic State. It is one of the largest cities in the Kurdish part of Syria and is being defended by, among others, the armed wing of the Democratic Union Party (PYD), the YPG (People's Protection Units)

Firstly, we differentiate between state and non-state violence. We barely pay any attention to the state violence perpetrated by the regime, although it claims the most civilian lives (1,707 in September, a third of those women and children). An average of 10 children per day die in bomb attacks ordered by Assad.

We only deem the actions of IS to be "repellent" and "inhuman". We are apparently conducting the war against the terrorists "to save human lives", yet no one wants to hear that we could save many more human lives by halting Assad's terror. And this despite the fact that state-sponsored crimes have been reliably documented by activist and human rights groups within Syria itself as well as by international NGOs and the UN: chlorine gas in Jobar, cluster bombs in the provinces of Aleppo, Hama, Idlib and Daraa, the starving out and bombardment of Al Waer in Homs, barrel bombs in Aleppo, missiles in East Ghouta near Damascus as well as Saraqeb in Idlib, to cite just a few recent examples. Anyone who is so inclined can watch as dust-covered children are pulled out of piles of rubble every day – some of them dead, some of them alive. But we are not so inclined.

Secondly, we are taking action primarily for IS victims who are members of religious minorities. When the jihadis (still known as ISIS at the time) captured the Syrian provincial capital of Raqqa in the summer of 2013 and established their terror regime, no one was interested. After all, most of those who live in Raqqa are Sunnis. Public executions, the stoning of two women and brutal corporal punishments barely made the headlines. It was only when the Christians were driven out of Mosul in northern Iraq, and the Yazidis were stranded in the mountains, that the West finally discovered IS.

The US rushed to help the religious minorities in Iraq, but not the Sunni majority in Syria. While the eyes of the world were fixed on the Sinjar Mountains, IS massacred 700 members of the Sheitat tribe, among them many women and children, in the Syrian province of Deir al-Zor. Again, here in the West no one took any notice. Most IS victims in Syria have thus far been Sunnis, a group that represents the majority of the population and that lives in the areas controlled by IS. These people harbour a growing sense that the international community views them as second-class victims. 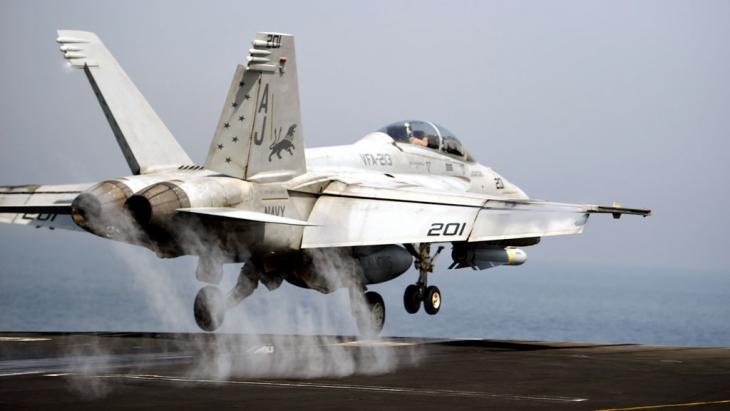 A US fighter jet taking off. According to Kristin Helberg, "an increasing number of activists, fighters and members of the opposition feel compelled to criticise the US air campaign in order to avoid losing the support of their compatriots. After all, the fighter jets have thus far primarily hit infrastructure such as oil refineries and granaries, which are essential for the survival of the Syrian people"

Ignored and betrayed by the world

Thirdly, we are also now widening the division between Arabs and Kurds, whether intentionally or unintentionally. Everyone has been talking about the Kurds since the siege of Kobani. This is a good thing, as these people are justified in feeling ignored and betrayed by the world: whether it was in 1920, when the Europeans promised them their own state and this never materialised; or in 1962, when Damascus stripped tens of thousands of Syrian Kurds of their Syrian nationality; or in 2004, when the Kurds rebelled against the Assad regime and no one declared their solidarity with them apart from a few human rights activists.

The mistrust between Arabs and Kurds has been growing for years, and now it is turning into open hatred. This is a tragedy for Syria. Online, Syrian Arabs are asking why everyone is focused on the fight of the Democratic Union Party (PYD) in Kobani and not on the resistance to IS being put up by other rebel groups near Aleppo, in Deir al-Zor and Raqqa. A colonel with the Free Syrian Army (FSA) says that no one has come to the aid of his fighters, although the FSA is actually fighting IS "on behalf of the entire world".

From the Syrian point of view, the actions of the US are not comprehensible. Washington may officially be referring to certain FSA units as allies in the battle against IS, but in reality, these are not being treated as such. Assad is being informed about air attacks, the FSA is not. Consequently, many civilians now view the rebels as traitors and stooges of the West.

An increasing number of activists, fighters and members of the opposition feel compelled to criticise the US air campaign in order to avoid losing the support of their compatriots. After all, the fighter jets have thus far primarily hit infrastructure such as oil refineries and granaries, which are essential for the survival of the Syrian people, even if they are currently under the control of IS. Activists report that the price of daily essentials has doubled in Raqqa since the start of the US attacks, and that people are increasingly showing solidarity with IS.

The US is, however, now airdropping weapons to stranded PYD defence units in Kobani. It is true that the PKK's sister party is made up of members with less than spotless democratic credentials and that the party persecutes dissidents, but anyone sealing an alliance with nations such as Saudi Arabia in the fight against IS cannot be squeamish when it comes to the PYD. After all, the party has been putting up effective resistance to the jihadis for a year already. 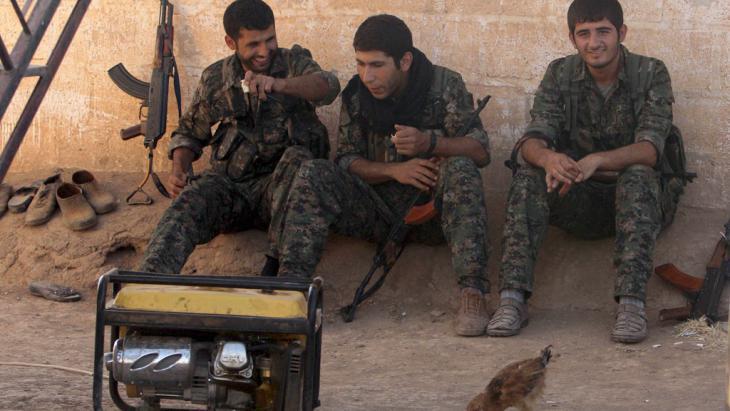 Kurdish YPG fighters in Qamishli, Syria. The YPG has been fighting effectively against the jihadis of Islamic State for a year. Because its political arm, the Democratic Union Party (PYD), has entered into an alliance with the FSA near Aleppo, Kristin Helberg feels they should be supported immediately by the West: "After all, it is now our responsibility to unite the Syrians and not drive them further apart"

Five steps for a sustainable strategy

Supporting the Kurds, not neglecting the Arabs, making allies of the Sunnis and not losing sight of Assad as the original cause of the terror – from these insights, we can derive five essential steps that could turn random air attacks into a sustainable strategy.

Firstly, air attacks against IS must be agreed with activists and rebels on the ground, who can provide information on suitable targets. Secondly, Syrian rebel groups that have already been identified should be included in the war against IS by giving them modern weapons to enable them to advance against IS on the ground. Thirdly, it would be advisable for US fighter jets to throw not just bombs, but also humanitarian aid to alleviate the suffering of the Syrian people whose support the West urgently needs.

Fourthly, any initiative that overcomes ethnic and religious divides – such as the alliance between the FSA and the PYD near Aleppo – deserves immediate support in the form of cash and weapons. Agreement must be worthwhile! After all, it is now our responsibility to unite the Syrians and not drive them further apart. The fifth step would be to impose a long-term no-fly zone on regions liberated from IS control to protect them from attack by the regime, so that the opposition (Arabs and Kurds) are able to establish alternative state structures there.

In Syria of all places, all military engagement must consider the impact on the nation's people; unilateral uncoordinated measures to stem terror will only drive them into the arms of IS.

In Islamic mysticism, Ramadan is more than just a period of prescribed abstinence, signifying an opportunity for inner contemplation. Marian Brehmer explores the spiritual ... END_OF_DOCUMENT_TOKEN_TO_BE_REPLACED

Syria's president appears to have triumphed. He remains in power, the Syrian conflict is nearly over, and efforts are underway in the Arab world to normalise relations with his ... END_OF_DOCUMENT_TOKEN_TO_BE_REPLACED

The neo-Ottomanism propagated by Erdogan has long been more than rhetoric and symbolic politics. This can be seen from recent developments in parts of northern Syria, where Turkey ... END_OF_DOCUMENT_TOKEN_TO_BE_REPLACED

Surging coronavirus cases in many parts of the world have overshadowed the start of this year's Muslim holy month of Ramadan, with festivities once again curtailed by contagion ... END_OF_DOCUMENT_TOKEN_TO_BE_REPLACED

Researchers agree that climate change alone cannot be blamed for the outbreak of war in Syria in 2011. However, neither can it be ignored as a reason this once blossoming country ... END_OF_DOCUMENT_TOKEN_TO_BE_REPLACED

Syrian-born Rafik Schami is a gifted storyteller and one of the most successful authors writing in German today. In his 50 years in exile in Germany, he has introduced the Arab ... END_OF_DOCUMENT_TOKEN_TO_BE_REPLACED
Author:
Kristin Helberg
Date:
Mail:
Send via mail

END_OF_DOCUMENT_TOKEN_TO_BE_REPLACED
Social media
and networks
Subscribe to our
newsletter