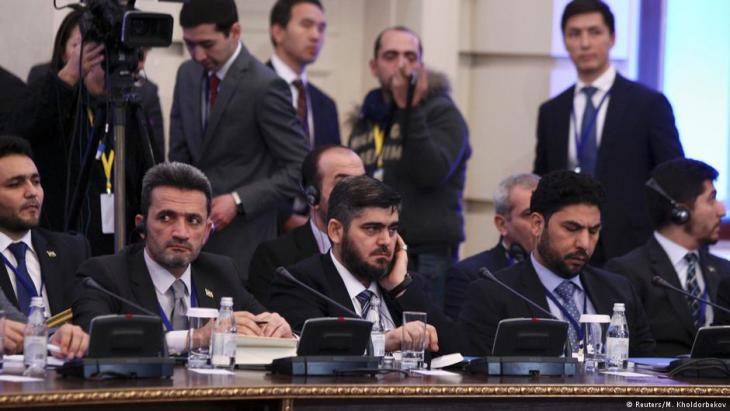 As the war in Syria rolls on and civilians continue to die, caught in the deadly crossfire of a multi-front conflict, the Syrian military and political opposition – bowing to intense international diplomatic pressure – has been dragged into political negotiations that lack the minimum conditions for success. Essay by Burhan Ghalioun, former chairman of the Syrian opposition Transitional National Council

In the absence of any respect for previous commitments or any clear international assurances, when the legal and political framework is so ambiguous and Russia is imposing diktats, it was only natural that the negotiations in Astana and Geneva should turn out to be manoeuvrings, the main purpose of which was to weaken the position of the opposition and secure the positions of the regime and its allies.

So instead of giving Syrians new hope that a political solution that meets their minimum aspirations can be reached, this round of sterile negotiations has added to their frustration. Scepticism is deepening that future negotiations in Astana or Geneva can ever produce the results Syrians are waiting for: an end to the war of aggression and the beginning of a real transition process, preparing for a new Syria where peace, brotherhood, justice and democracy ultimately prevail.

These negotiations have highlighted an array of facts that threaten to undermine the whole political process, if they have not done so already. The most important of them are:

The aim of these negotiations was not to meet the aspirations of Syrians, guarantee their sovereignty over their territory, restore their national unity, or guarantee their fundamental rights to dignity, just governance and equality before the law. It was to legitimise the military and political regional gains achieved by the members of the anti-revolutionary alliance and their internal and external agents – and thereby to exacerbate the struggle to divide the country into zones of influence. 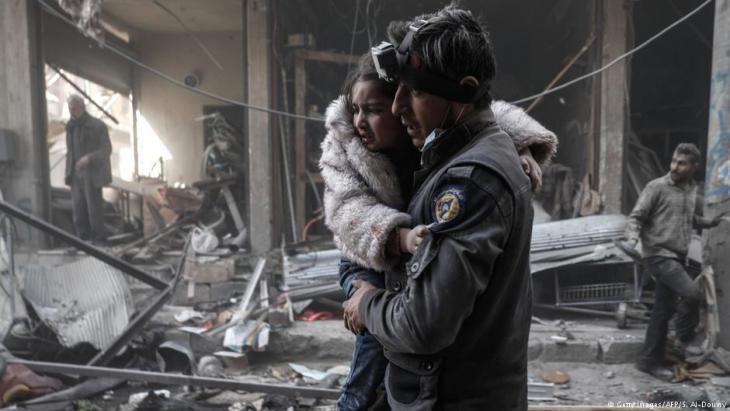 The destruction is ongoing: "scepticism is deepening that future negotiations in Astana or Geneva can ever produce the results Syrians are waiting for: an end to the war of aggression and the beginning of a real transition process, preparing for a new Syria where peace, brotherhood, justice and democracy ultimately prevail," writes Ghalioun

As a result, the Assad regime and its allies still insist on ignoring U.N. resolutions, including those of the Security Council, evading their implementation while playing for time and attempting to resolve the conflict through military means.

The agenda for the negotiations, which ignores the confidence-building measures envisaged by the Security Council, demonstrates the extent of their contempt for the lives of Syrians and their tragic plight. They have consummately failed to end random bombing, release detainees, break the starvation blockade, or stop forced displacement and demographic cleansing operations for strategic objectives in several areas.

As a consequence of the coronavirus pandemic, the Osnabruck Morgenland Festival took place via YouTube for the first time – transporting us to new cultural regions through music. ... END_OF_DOCUMENT_TOKEN_TO_BE_REPLACED

Mikhal Dekel’s father was part of a contingent of Jewish children who went on an odyssey from Poland to Iran as a result of the Holocaust. Dekel has now written a book exploring ... END_OF_DOCUMENT_TOKEN_TO_BE_REPLACED

Journalist Michel Abdollahi was born in Tehran in 1981 and moved to Hamburg in 1986. His big breakthrough came with his television documentaries on social issues such as ... END_OF_DOCUMENT_TOKEN_TO_BE_REPLACED

Iran’s contemporary poets are less well known in Germany than the old Persian classics. Kurt Scharf has now translated 32 of them into German. Marian Brehmer dipped into the ... END_OF_DOCUMENT_TOKEN_TO_BE_REPLACED

A heated debate is raging in the Islamic world about whether the religious and political spheres in Islam are one and the same. Before this matter can be settled, the terms " ... END_OF_DOCUMENT_TOKEN_TO_BE_REPLACED

Just one day after the UN Secretariat omitted Saudi-led forces from a "list of shame", an airstrike killed four children. The UN is under pressure to acknowledge Saudi Arabia's ... END_OF_DOCUMENT_TOKEN_TO_BE_REPLACED
Author:
Burhan Ghalioun
Date:
Mail:
Send via mail

END_OF_DOCUMENT_TOKEN_TO_BE_REPLACED
Social media
and networks
Subscribe to our
newsletter