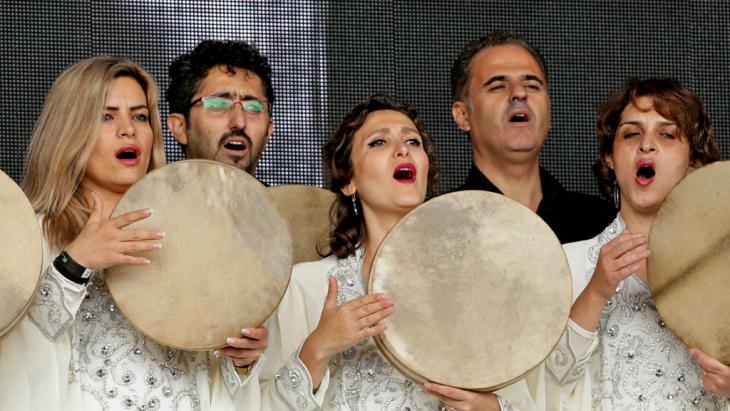 This year, the opening night of the 23rd Istanbul Jazz Festival was in the hands of the Orchestra of Syrian Musicians. The move had symbolic power in a city that is currently home to more than 300,000 Syrian refugees. By Marian Brehmer

Istanbul has changed: that much can be seen from the trilingual programme in Turkish, English and Arabic. It is an early summer evening in June. The tiers of Istanbul′s largest open-air theatre are packed out for the opening of the 23rd Istanbul Jazz Festival and the programme for the evening, followed by loud applause, is also read out in Arabic. The gig list contains a potpourri of musicians, covering the entire gamut of Arab music.

The scene is set for the evening by the Orchestra of Syrian Musicians, which arose out of the College of Music in Damascus around twenty years ago. The orchestra, as at home in Western as in Arab classical music, is now divided into two groups: the musicians who still live in Syria and those who have settled in the West since the outbreak of war.

One of these is Jehad Jazaab, one-time member of the Syrian Symphony Orchestra. The violinist now lives in Bremen, where he plays in a string quartet and an expat philharmonic orchestra. The Orchestra of Syrian Musicians is his musical haven and for Jazaab the concert in Istanbul is something of a bridge between the home city of Aleppo he left behind and his new home in northern Germany.

Paths of dialogue and healing

The violin notes from Jazaab and his fellow musicians at the start of the concert, accompanying the voices of a mixed choir, could just as easily come from an arabesque ballad by Fairuz. Anyone familiar with fusion-heavy Turkish popular music knows that these Arab melodies will not seem foreign to anyone in the audience.

But all the same, the strong presence of Arab musicians at the event gives out a signal that goes further than that. "This year, we wanted to organise a concert that would reflect the new cultural mosaic that our country is home to," says the head of the Jazz Festival, Pelin Opcin. "We are convinced that music has the power to unite people from different cultures and open up paths of dialogue and healing."

Like different paths crossing each other, the musical styles keep changing, always accompanied by the Syrian orchestra, which proves its versatility this evening. The Senegalese and Malian lute duo seems just as happy as the British pop singer Damon Albarn, of "Blur" and "Gorillaz",  to be playing to the Syrian rhythms. The unusual thing about it is that the Syrian musicians are not just guests here, but welcome musical hosts. This also shifts the perception of Syrians – no longer refugees, but part of the larger global community.

The international quality of Syrian music

Issam Rafea, who conducts the Orchestra of Syrian Musicians, is a well-known oud player himself; today, he lives in the USA and often appears at international festivals. The global spread and high quality of Syrian music is not just a consequence of migration due to the Syrian civil war, but the acknowledged result of long-standing partnerships like that with the Osnabruck Morgenland Festival.

Alongside Canadian jazz, a harp performance by the Mauritanian singer Noura Mint Seymali and the appearance of the Tunisian jazz and Sufi singer Mounir Troudi, an Arabic hip-hop quartet also takes to the stage. The rapping representative of Syria is Eslam Jawaad, who was born in Damascus. With his dark sunglasses and cap pulled low down over his forehead, Jawaad has all the hallmarks of a rapper.

The musician may have been living in the United States for some time, but in the last few years he has been back to Syria frequently. "The media only reports on the war zones, not about what else is going on in Syria," says Jawaad. Even the rap scene in Damascus is still lively. "In war time the rappers just have more to say."

The concert in Istanbul is also a personal matter for Jawaad, a statement to Turkey: "It isn′t easy to make such a large refugee population welcome. With music, we can remind the people here to emphasise the human side, instead of just focusing on the problems."

In the city that has become home to more than 300,000 refugees from Syria, this has great significance. As hundreds of young Turks stand up for the final song and add their emotional voices to the Arabic chorus, you can actually feel a strong sense of unity with their Syrian neighbours. And this in a time that many natives of Istanbul themselves see as very dark.

Ronya Othmann's novel "Die Sommer" (The Summers) tells the story of Leyla – the daughter of a German and a Yazidi Kurd – who visits her grandparents' Yazidi village in northern ... END_OF_DOCUMENT_TOKEN_TO_BE_REPLACED

In the first case of its kind anywhere in the world, a German court is probing Syria's state torture system. Giving testimony at the trial is one of Syria's most widely respected ... END_OF_DOCUMENT_TOKEN_TO_BE_REPLACED

Political scientist Hugo Micheron on the origins of Islamist terrorism in France, his conversations with jihadists – and on the trial now beginning against the perpetrators of the ... END_OF_DOCUMENT_TOKEN_TO_BE_REPLACED

Five years ago, as hundreds of thousands of refugees came to Germany, Chancellor Angela Merkel maintained: "We can do it." How has Germany – and those who sought asylum – managed ... END_OF_DOCUMENT_TOKEN_TO_BE_REPLACED

Five years ago, Samer Serawan spent many long, cold nights in a muddy courtyard in Berlin, one of many Syrians who queued up to live in Germany. Now he has a successful restaurant ... END_OF_DOCUMENT_TOKEN_TO_BE_REPLACED

In Lebanon, collective trauma is obvious. The explosions in Beirut on 4 August will have triggered memories of the civil war in many people. By understanding how individual and ... END_OF_DOCUMENT_TOKEN_TO_BE_REPLACED
Author:
Marian Brehmer
Date:
Mail:
Send via mail

END_OF_DOCUMENT_TOKEN_TO_BE_REPLACED
Social media
and networks
Subscribe to our
newsletter