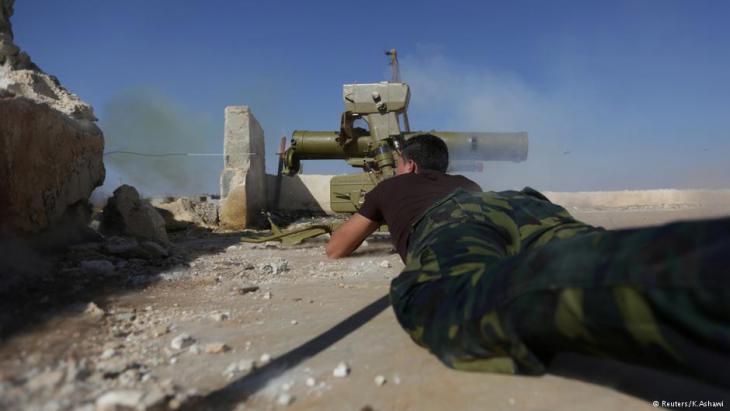 The Syrian revolution
Girding the forces of change

"We will return, Aleppo" says the writing on the walls of the devastated city. These words defy Assad's claim that his regime's military victory is now complete, writes the Syrian dissident Akram al-Bunni

In the aftermath of the military triumph of the Syrian regime and its allies in Aleppo, four misunderstandings are stirring up confusion among the Syrian people and the opposition.

The first misunderstanding: many say that the military defeat of the rebels spells the end of the political revolution. They are mistaken. Anyone who believes that the conquest of Aleppo will stabilise the Syrian regime is deluded. For Assad's rule by violence is not capable of creating a future for Syria. This failing is due not only to the atrocities the regime has committed. Nor can it be found in the instinctive belief that the course of history is preordained, or that the rule of law and justice will sooner or later inevitably prevail against injustice and violence.

The war in fact goes on: large areas are still outside the regime's control. Assad has been greatly weakened by sustained, bloody battles and interventions from outside. When he finally took Aleppo, it was mainly Islamist groupings that were defeated. And their objectives have nothing to do with the Syrian revolution and its quest for democracy.

Most important of all, however, is that the original reasons for the revolution – the oppression of the people and the corrupt political system – have remained unchanged. On the contrary: during the years of war, given the continuing violence perpetrated by the regime, the need for political transformation has become more apparent than ever.

How can a society that has been oppressed, torn apart and scattered across the globe ever hope to regain its vitality and cohesion without fundamental political change? Only profound transformation is capable of paving the way for a just political system: a system that serves the people rather than imposing itself on them through violence and terrorist acts. 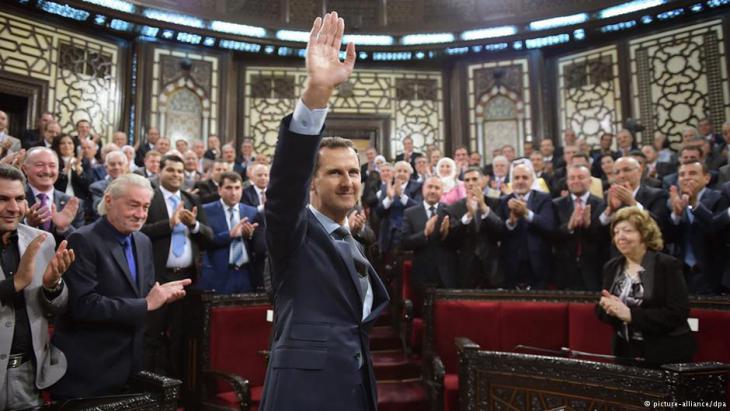 The people's revolt: ″first and foremost, the revolution was a response to objective political grievances, which erupted in demonstrations against despotism, nepotism and corruption. The people were crying out for their rights. Yet the response was torture, arbitrary detention and murder,″ writes al-Bunni

Only in this way can the future rulers in Damascus gain the confidence of the world community. And without their support it will be difficult to deal with the aftermath of the conflict and to resolve the humanitarian issues.

The second misunderstanding can be summed up with a famous quote: ′success has many fathers, but failure is always an orphan′. Major opposition figures are thus distancing themselves from the defeat of the rebels in Aleppo and putting the blame on others.

It is of course completely understandable and justifiable to critically analyse a defeat in order to learn from the mistakes made. But that should not lead us to seek blame for the current situation in Syria only among the opposition, despite the fatal discord in its ranks. That would be like chasing down the victim instead of the criminals.

If we confine our analysis exclusively to the opposition, we ignore the responsibility borne by the regime and its allies. It was after all the regime that insisted on seeking a military solution through the excessive use of force. And conveniently enough, the world community at the time proved unable to protect the civilian population and enforce a political way forward.

Nevertheless, it is still important to not only consider the circumstances at the beginning of the Syrian revolution, but also to investigate the role of the opposition in the course of the conflict. Conspicuous in this connection is the opposition's ongoing internal fragmentation and ideological clashes. Its authority dwindled precisely at the moment when the opposition should have been leading the people's movement and quashing the rise of fundamentalist currents.

Moreover, the opposition failed to provide sufficient support to peaceful factions of the revolution and popular movements. It relied too strongly on assistance from outside, obeying the commands of foreign stakeholders.

The opposition was not active enough in terms of propaganda, either. It should have openly publicised the suffering of the Syrian people in order to force the international community to take action and to press forward to find a solution to the conflict. The opposition's greatest failure, however, is that it did not manage to present itself as a viable alternative to the status quo, as an option that respected plurality and a democratic culture. 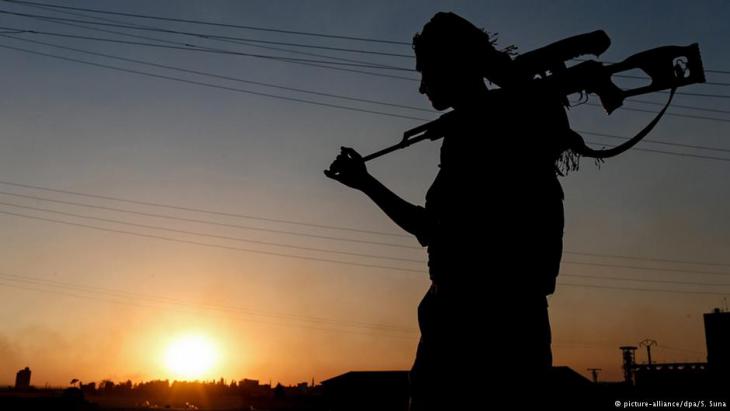 Are we likely to see a repeat of Aleppo? How is the defence of the territories that still remain beyond the control of the regime being organised? Will the insistence on military solutions and the tolerance of radical groups be more likely to strengthen or weaken the further course of the revolution?

The third misunderstanding arises from being unable to distinguish between a dynamic Syrian civil society and the various jihadist groupings. The latter have done the revolution great harm by using the uprising for their own ends. They founded their own emirate and forced people exhausted by war to submit to their fundamentalist world view under the threat of the most savage punishment.

"Syria remains free and Nusra must go!" shouted the demonstrators in Aleppo, Idlib, Hama and other towns in response to the attempt by Jabhat Fatah al-Sham (formerly al-Nusra Front) to seize their banners and apprehend or even murder activists. This is a clear sign that the Syrian people do not accept the jihadists and the role they have assumed. Yet care is needed here; after all, should the fundamentalists get out of control, further violence and sectarian conflicts could be the outcome.

Many of the jihadists on the battlefield clearly represent only the interests of their financial backers, or are acting out of purely selfish motives. Each time a defeat loomed, many of them managed to save themselves through negotiations. They then left the civilians to their fate.

All of the above raise the question of whether the scenario in Aleppo might soon be repeated. How is the defence of the territories that still remain beyond the control of the regime being organised? Will the insistence on military solutions and the tolerance of radical groups be more likely to strengthen or weaken the further course of the revolution?

Are there still any political and cultural elites left that wield the power to create a new form of social cohesion across ideological boundaries? And will they be able to steer Syria's internal conflicts into non-violent channels?

Fourth, one must distinguish between the revolution itself and its results up to now. The revolution was first and foremost a response to objective political grievances which erupted in demonstrations against despotism, nepotism and corruption. The people were crying out for their rights. Yet the response was torture, arbitrary detention and murder. On the other side are the phenomena that thrived in this fertile ground of oppression and steered the struggle in the direction of Islamism. This development has little to do with the quest for freedom and respect for human dignity.

It would therefore be premature to now deny the revolution its legitimacy as a historical event just because it has not yet brought about the desired outcome. That would be tantamount to declaring the regime with its acts of violence as innocent, while at the same time neglecting the role played by regional and global stakeholders, which have likewise fought against and deformed the revolution.

"We will return, Aleppo" says the writing on the walls of the devastated city. These words defy Assad's claim that his regime's military victory is now complete. They speak from the depths of the changes that have taken place during the years of the revolution. And they demonstrate that the hope which has taken root in the souls of the people is capable of reawakening the revolutionary spirit and girding the forces of change against the mistakes committed in the past. The opposition will then be able to face up to the new challenges in Syria despite all the difficulties involved.

Syrian dissident Akram al-Bunni is a prominent writer and journalist. He spent 16 years as a political prisoner in Tadmor high-security prison. His brother is the renowned human rights lawyer Anwar al-Bunni.

Arab youth express their hopes and wishes for the New Year, spanning everything from civil and political rights, to education, to arts and culture. By Rafiah Al Talei END_OF_DOCUMENT_TOKEN_TO_BE_REPLACED

Life imprisonment for crimes against humanity: that was the sentence handed down to Anwar Raslan in the world's first trial of a member of the Syrian torture system. Matthias von ... END_OF_DOCUMENT_TOKEN_TO_BE_REPLACED

Moncef Marzouki was Tunisia's first democratically elected president after the fall of dictator Ben Ali. Today he is the most prominent critic of increasingly counter- ... END_OF_DOCUMENT_TOKEN_TO_BE_REPLACED

Historically Iraq's Yazidi community was isolated, under-resourced and very conservative. Seven years after the "Islamic State" tragedy, the community is more open to the world – ... END_OF_DOCUMENT_TOKEN_TO_BE_REPLACED

In this new bilingual edition, translated by Humphrey Davies, al-Jawbari, one of the thirteenth century's leading experts in skullduggery reveals all there is to know about the ... END_OF_DOCUMENT_TOKEN_TO_BE_REPLACED
Author:
Akram al-Bunni
Date:
Mail:
Send via mail

END_OF_DOCUMENT_TOKEN_TO_BE_REPLACED
Social media
and networks
Subscribe to our
newsletter