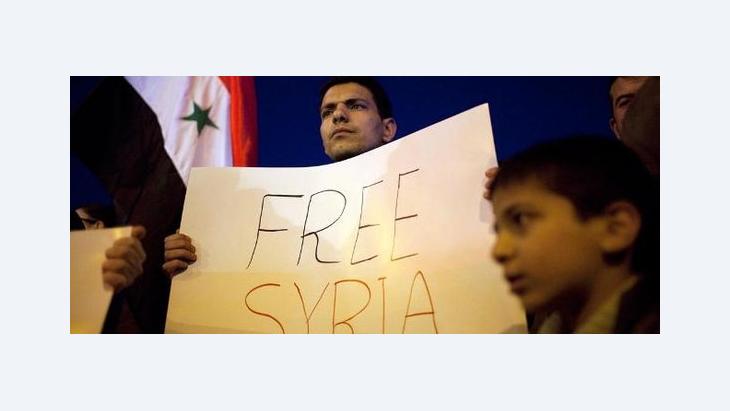 ﻿The Syrian author Rafik Schami is convinced that the 40-year-old dictatorship in Syria is approaching its end, and that there is no going back for the Syrian people. Nevertheless, he is concerned that freedom, once achieved, will only be of short duration. In this essay, Schami calls on the West to support the democratic opposition and on his compatriots to espouse reconciliation

﻿On 15 March 2011, a group of youths in the dusty city of Daraa unsuspectingly sparked the most far-reaching revolution in the past 500 years of Syrian history. They sprayed graffiti denouncing corruption, the secret police and poverty. They were arrested and tortured. When their parents asked after their children, the head of the secret police, a cousin of President Bashar al-Assad, brusquely rebuffed them.

So the next day, they began to demonstrate, albeit rather timidly. Not a single word was uttered against the president. He, however, a prisoner of his own system, ordered that the demonstrators be fired upon. He had learned from his father: as soon as people raise their voices, they must be taught a lesson they will not forget. His father applied this maxim in 1982 in the city of Hama. After the massacre, in which more than 20,000 innocent people were killed, a deathly silence reigned throughout the country. Things are not as straightforward for his son; times have changed.

Bashar al-Assad lies when he promises reforms. He has to lie. The first serious reform measure would be to disband the 15 secret security forces, which work to suppress their own people. This would be akin to putting his head in the noose. As soon as the tanks and snipers moved out of the cities, they would be freed by the revolutionaries.

Facing the void and an uncertain future: fundamentalists have called for revenge on the Alawite minority, which has ruled Syria for the past 40 years; Syrian-born author Rafik Schami fears that the end of the Assad regime could be followed by a bloodbath

​​Reconciliation instead of revenge

I am writing an article for the Syrian opposition newspaper Safahat Suriye. In this article, I speak out against the spirit of revenge and for the courage to reach out a hand to one's opponents. I write out of concern for the Alawite minority, which has been persecuted for millennia and which has ruled Syria now for the past 40 years. Fundamentalists have called for revenge. The enlightened opposition must fight against this trend. The current regime is the plague; a religious civil war would be cholera.

Although things looked so incredibly bleak, the unbelievable has taken place. The rulers had absolute power, and the West accepted the status quo. The Arab people sought refuge in consumer goods; the intellectuals were either dead, in prison or in exile; the opposition was broken. And now? Assad will fall! There is no going back for the people.

And what then? Even today, the effects of 12 years of Nazi dictatorship can still be felt in Germany. Syria has been deformed by 40 years of dictatorship. How will the people react once they are suddenly free? At least the Syrians will have liberated themselves. But what will come after the fall of the regime? Civil war? A provisional unity government? A bloody coup? Will the fundamentalists seize power?

The role of the West

One need not fear the fundamentalists. Although they might appear strong at the moment, they do not have a programme for solving Syria's problems. The country can't be ruled by the Sharia; some 40 per cent of the population are not Sunni. It is possible that a coup or civil war will result in freedom being drowned in a bloodbath. The West must support civic democratic opposition, as it masterfully did in Eastern Europe. Only in this way can fundamentalists be stopped and civil war prevented.

Isn't it remarkable that regimes that used the slogan "religion is the opium of the people" would themselves construct a religion-like system? Even the Assads believed the chanting crowds that heaped praise upon their rulers, crowds that had been assembled by the secret services. They believed in their divine genius. By contrast, even when a donkey is called a lion a thousand times, it won't be fooled. Donkeys are not as dumb as we tend to think. 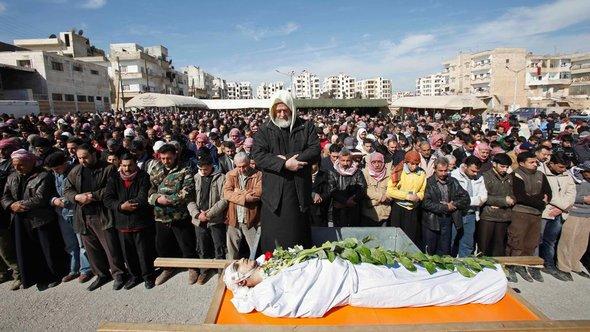 Massacre on a large scale: according to the Syrian opposition, more than 6,000 people have already lost their lives in the protests against the regime, which have been going on for just under a year now

​​More than 80,000 individuals have disappeared since last March. It is reported that they have been held prisoner in football stadiums, army barracks and, lately, even in ships off the coast. I fear that many of them are dead. It is only a question of time until these atrocities are uncovered. The Syrians are paying in one go what the Egyptians, Yemenis and Tunisians are paying in instalments.

The West criticizes Assad, and then, through the back door, provides him with software from the company "Blue Coat", which is destroying the opposition's single most effective weapon: Internet communication. Thanks to America's help, the Syrian secret police can now restrict Internet access across entire regions, thereby subverting and disrupting communication between opposition forces.

An argument with a Palestinian friend has led to the breakup of a friendship that had lasted 25 years. He regards the Syrian regime as the last bastion of Arab nationalism. I recounted the crimes committed by this regime against his beloved nation. Insulted, he stood up and left.

I had a night-time telephone conversation with a Syrian intellectual. He laid bare his fear of the void. His expectations and standards no longer apply. I heard a disappointed man on the other end of the line. He used to believe that intellectuals led the people; now, he is forced to experience how young people, women, and men – none of whom possess even a thousandth of his knowledge – have degraded him to the position of a confused commentator on events. 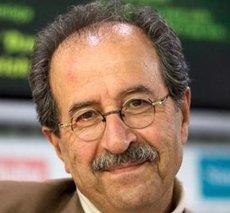 "We have to learn to forgive one another. Otherwise, everything is lost," writes Schami in his concern for the future of his native country

​​The Syrians have the most difficult nut to crack. Many centres of power are linked to and entangled with the regime in Damascus: Israel, Iran, the Hezbollah, Iraq, Turkey, the Russians, and the Saudis. The Kurds, justifiably so, are demanding autonomy. All of this will be set in motion once Assad falls.

The Arab League is an association of dictators. Its selected observers cannot be much better than their association. Despite this, its mission to Syria proved to be a victory for the opposition. For the first time, the regime had to admit that the resistance could not be broken – not with soldiers, not with the secret police, not with death squads. This is more than has been achieved by the UN, including the efforts of its Secretary General, the Security Council and its human rights commission. It is also even more than has been achieved by the EU.

I am now a member of the Association of Syrian Authors. In addition to opposition figures, the association is also represented by authors, who, until recently, had been staunch supporters of the regime. At first, I was repelled by the idea of being on the same list as these people. But we have to learn to forgive one another. Otherwise, everything is lost.

Rafik Schami is one of the most successful contemporary authors in the German language. He was born in Damascus in 1946 and comes from a Christian Aramaic family. As a young man, he attended a Jesuit boarding school in Lebanon and then studied Chemistry, Mathematics, and Physics in Damascus. At the age of 19, he helped establish the wall-newspaper Al-Muntalak (The Starting-Point) in Damascus, which was banned in 1969. Schami fled into exile and has lived in Germany since 1971. His most successful novel to date has been The Dark Side of Love.

Surging coronavirus cases in many parts of the world have overshadowed the start of this year's Muslim holy month of Ramadan, with festivities once again curtailed by contagion ... END_OF_DOCUMENT_TOKEN_TO_BE_REPLACED

German Middle East analyst Guido Steinberg and television journalist Ulrich Tilgner have both published new books on the conflicts in the Middle East. Their analyses and their ... END_OF_DOCUMENT_TOKEN_TO_BE_REPLACED

On 27 March, Iran and China signed a 25-year accord intended to foster "strategic co-operation". Despite ongoing uncertainty over the deal's actual scope, content and chances of ... END_OF_DOCUMENT_TOKEN_TO_BE_REPLACED

In Grenoble, France, two professors have been pilloried in a dispute over the use – or otherwise – of the term Islamophobia. Is freedom of speech in jeopardy? By Stefan Dege and ... END_OF_DOCUMENT_TOKEN_TO_BE_REPLACED
Author:
Rafik Schami
Date:
Mail:
Send via mail

END_OF_DOCUMENT_TOKEN_TO_BE_REPLACED
Social media
and networks
Subscribe to our
newsletter