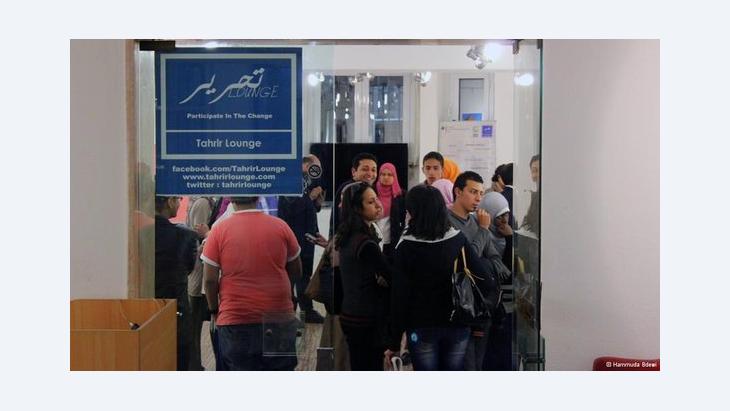 The ''Tahrir Lounge'' in Cairo

﻿In a project funded by Germany, a team of young Egyptians in Cairo is trying to boost civil participation and create political awareness without subscribing to any particular ideology. By Matthias Sailer

At a recent evening event in Cairo, a group of about 40 young Egyptians took part in a lively discussion about corruption and nepotism, hot-button issues in their still politically turbulent country.

The debate followed the screening of a film about how the 2011 Egyptian revolution was perceived by the residents of a village in the Nile Delta. The director spoke about a primary school teacher who was suddenly appointed head of an entire administrative district allegedly because he was a relative of the governor.

That prompted a journalist on the podium to turn to a government official invited to take part in the debate and ask: "How can it be that this primary school teacher, who has never done anything in his life besides teaching at this school, suddenly heads an administrative district that's also relatively large? How can that be? Just because he's a cousin of the governor?"

The event was held at the Goethe Institut, a German government-funded organisation promoting German language and culture abroad. Nevertheless, the organisers were all Egyptian and they organised the evening without any input or influence from the institute.

The animated debate was organised by the "Tahrir Lounge," an initiative that was founded by Mona Shahien, a 27-year-old Egyptian political activist, shortly after the start of the revolution. It is funded and promoted by the Goethe Institut, the German embassy and the German foreign ministry. "Tahrir", which means "liberation" in Arabic, is the name of the central square in Cairo which became a rallying point for protests that toppled the government of President Hosni Mubarak more than two years ago. 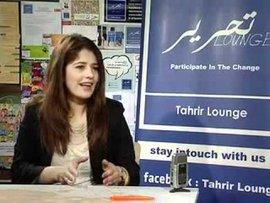 "You can't achieve democracy without the involvement of the people and without them exercising their rights. You can only have democracy when the voters make informed decisions," says Mona Shahien, founder of the Tahrir Lounge

"The Tahrir Lounge is a space for everyone. Our main goal is civil participation and politically mature citizens," says Shahien. "You can't achieve democracy without the involvement of the people and without them exercising their rights. You can only have democracy when the voters make informed decisions."

To reach this goal, the Tahrir Lounge organises events on a near-daily basis that are open to all. There are workshops on human rights, discrimination against women, conflict resolution and on how to lead negotiations and discussions.

Over 50 parties and groups of all political stripes have participated in seminars so far and presented themselves to largely young audiences. For Mona Shahien, it's an important development because although a lot of young Egyptians are interested in politics, very few of them get the chance to get actively involved in any of the parties.

That's why the Tahrir Lounge reaches out to young people and offers free workshops. "We asked the parties to nominate two or three of their people who then take part in a training seminar," says Shahien. "After that, they can communicate their concerns and issues to their respective parties. We just offer them a framework."

The seminars help the representatives of the invited parties to get to know each other. They often keep in touch long after the training sessions. That helps create new channels of communication. And that in turn leads to people who often hold completely different political points of view and ideological positions to exchange ideas and learn to respect each other despite their political differences.

That's linked to a fundamental principle of the Tahrir Lounge, says Mona Shahien, which is that the project should not cater to any particular political ideology. "By now, we have built a really good reputation because we're one of the places in Egypt that isn't linked to a certain political movement," she says. "You can't say that we are liberals or Islamists or secularists. We're a space where all these strands are represented." 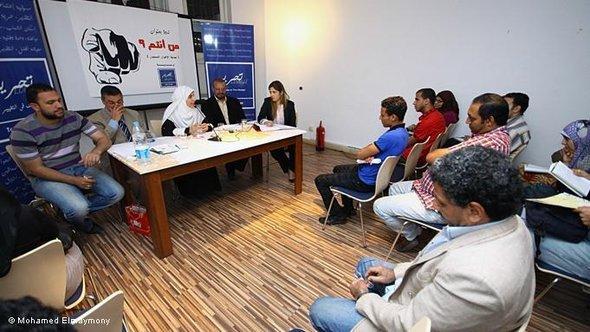 Dialogue, information and political education: the Tahrir Lounge in Cairo is a meeting place for Egyptians who are interested in politics and would like to know more about the political parties and the topical issues moving their country

Despite the financial help from Germany, the Tahrir Lounge still faces a host of challenges. Foreign influence is always viewed with scepticism in Egypt, and foreign groups are often suspected of trying to wield political influence in the country.

That is why Mona Shahien considers it very important for the project to remain independent in framing its own programme. "Right from the beginning, we have said 'yes, we are financed by the German government, yes, we do belong to the Goethe Institut, but when it comes to content, we are completely independent.'"

Back at the event at the Goethe Institut, the situation was turning increasingly awkward for the government official who was being grilled about nepotism in politics. He tried to defend his ministry, arguing that there are now mechanisms in place to curb the problem and pointing out that basically, the government is on the right track. He added that these things take time; even God needed six days to create the world. That elicited a lot of head-shaking and frowning in the audience; some people even laughed.

Mohamed, 24, says the discussion was a partial success. "The problem does remain. But at least many have realised that the government hasn't recognised the seriousness of the situation," he says. "A year ago, I would have accepted the official's reaction. But now I see that the government is incompetent and is not taking action."

Mohamed is a frequent visitor to the Tahrir Lounge and has taken part in a number of workshops. In the past few months, he says, he's realised that politics is often a dirty business. But it's important to understand how it works, he adds, otherwise you can't change anything.

Recep Tayyip Erdogan, disappointed by the European Union’s reluctance to integrate Turkey into its ranks, has re-directed his country’s diplomacy toward the Maghreb and Africa to ... END_OF_DOCUMENT_TOKEN_TO_BE_REPLACED

The Egyptian series "El-Ekhteyar 2" was created by a production company with close ties to the military – and pursues a corresponding narrative. Moritz Baumstieger explains how ... END_OF_DOCUMENT_TOKEN_TO_BE_REPLACED

Looking to mobilise the Egyptians, Abdul Fattah al-Sisi and his ministers will refer to them as the "people". As soon as the Egyptians demand something of the state, however, they ... END_OF_DOCUMENT_TOKEN_TO_BE_REPLACED

The rollout of coronavirus vaccines in the Middle East and North Africa is already taking place on a massive scale, with the United Arab Emirates leading the way. Nevertheless, ... END_OF_DOCUMENT_TOKEN_TO_BE_REPLACED

Egyptian singer Umm Kulthum continuous to be an icon, almost 100 years after she published her first record. But what about the other famous women of the 1920s? In his new book, ... END_OF_DOCUMENT_TOKEN_TO_BE_REPLACED

The Prophet Muhammad never executed anyone for apostasy, nor encouraged his followers to do so. Nor is criminalising sacrilege based on Islam’s main sacred text, the Koran. In ... END_OF_DOCUMENT_TOKEN_TO_BE_REPLACED
Author:
Matthias Sailer
Date:
Mail:
Send via mail

END_OF_DOCUMENT_TOKEN_TO_BE_REPLACED
Social media
and networks
Subscribe to our
newsletter