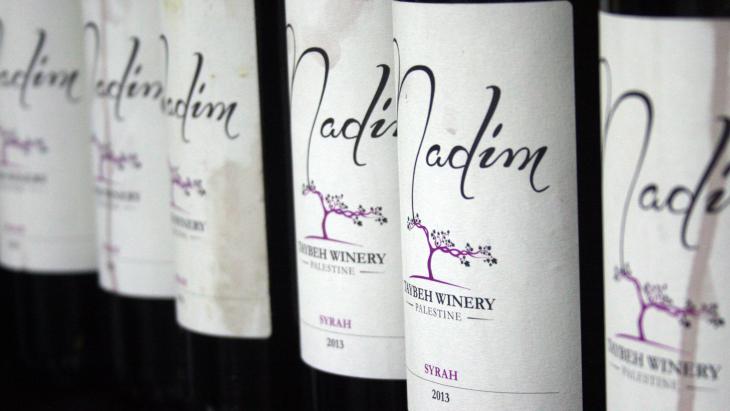 Taybeh, the last Christian village in the West Bank, is well-known for its brewery and annual Oktoberfest. Late last year, the family that owns the brewery launched a winery. The first Taybeh wine festival (the Taybeh Vinfest) was held at the end of February. The Khoury family has always claimed that developing the local economy is their way of putting up peaceful resistance and encouraging Palestinians to stay in – or return to – their native home instead of going abroad in search of better opportunities. By Ylenia Gostoli

The Taybeh Golden Hotel's sleek glass walls and neoclassical-inspired facade would blend anonymously into the background of most streets in Paris or London. But in the sleepy West Bank village of Taybeh, its brightly lit, chandelier-clad lobby is unlikely to go unnoticed.

One family in Taybeh is determined to turn this small village 20 kilometres north of Jerusalem, the only remaining Christian enclave in the West Bank and home to some 1,400 people, into a tourism hub in the Occupied Palestinian Territories.

Nadim Khoury returned from Boston to his native Taybeh after the Oslo Accords, taking advantage of the climate of temporary stability to set up the successful brewery that first put the village on the map. The yearly Oktoberfest that began in 2005 drew visitors in their thousands.

Last November, Khoury opened what he calls "the first boutique winery in Palestine" and put his 23-year-old son, Harvard University graduate Canaan Khoury, in charge. The winery, located in the ground floor of the hotel, then launched its first wine festival, which took place on 27 and 28 February 2015.

"Every family here in Taybeh makes their own homemade wines. Jesus converted water into wine, and we are Christians. So, starting a winery was a natural development of the business," jokes Nadim Khoury. 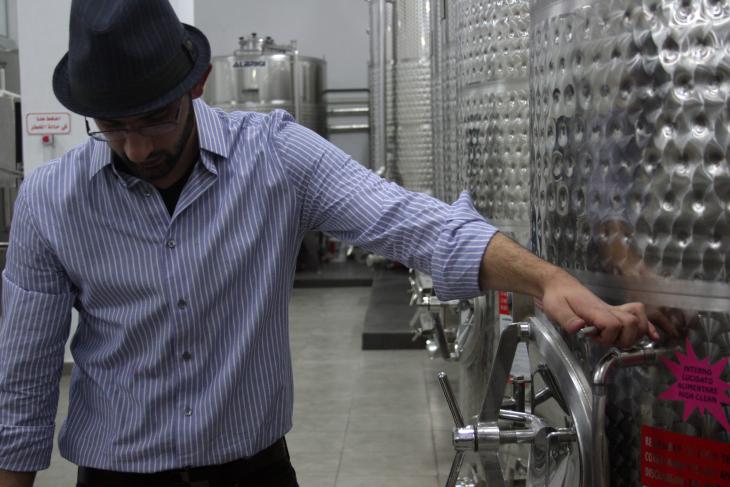 Canaan Khoury at the Taybeh winery. Khoury, a 23-year-old Harvard University graduate, was put in charge of the new winery in November 2015 by his father, who returned from Boston to his native Taybeh after the Oslo Accords to set up the family's successful brewery

The event was a smaller affair than the raucous beer festival, which has drawn criticism in the past and was last held in a luxury hotel in nearby Ramallah, the seat of the Palestinian government. But this year's wine festival still managed to attract hundreds of visitors to the winery – an incongruous mix of ambassadors, wealthy local businessmen, converse-clad expats and young well-to-do Palestinians, accustomed to mingling in such circles.

"I came because I used to go to the beer festival, it had become a kind of tradition," said 30-year-old Ayat Said, herself from a Muslim family in Bethlehem. "This feels less authentic, but I suppose it's good they are managing to do some normal trading under occupation."

It's still a family affair, but ambition is not something the Khourys lack, and the business looks set to expand even further despite the many obstacles of operating in a territory that remains economically dependent on Israel.

"My cousins will be running the hotel," Canaan Khoury told Qantara.de. "It may seem like a crazy idea, but Taybeh is in a very strategic location. Close to Ramallah, close to Jerusalem, and close to the road that leads to the north," he said, adding that the 80-room hotel will be aimed at pilgrims to the Holy Land. However, political instability greatly affects tourism in the West Bank. Following the latest offensive on Gaza, the number of visitors plummeted.

"Gaza has had a negative impact on tourism in the West Bank because people are afraid to come; there were many cancellations. Even though there have never been cases of tourists getting hurt here," George Rishmawi, executive director of Masar Ibrahim al Khalil, a Palestinian non-profit organisation that developed a long-distance cultural walking path across Palestine, told Qantara.de.

The Palestinian economy is also highly dependent on foreign aid. Palestinians are the largest per capita recipients of international development assistance in the world. A quarter of the Palestinian population lives in poverty and 40 per cent of young people are unemployed. "Ours is an economic resistance where we try to be more independent, be a sustainable country," Canaan Khoury said.

The grapes used to make the wine come from local Palestinian farmers and from the family's own vineyard. "The farmers are the only ones in Palestine who have international grapes, and some would sell their grapes to Israeli wineries, so they were excited to be able to sell them without them having to cross a checkpoint," adds Canaan Khoury. "But of course the occupation is the main reason for our inability to expand further."

"The village receives water once a week," he continues. "Beer is mostly water, without water we can't produce more. To give you another example, last week the electricity was cut off." Power was cut twice in the West Bank in late February due to the Palestinian Authority's unpaid debt to the Israel Electric Corporation, totalling some €430 million. The Oslo Accords and the Paris Protocol signed in 1994 stipulate that the Palestinian Authority must buy its electricity from Israel.

The protocol, which is still the framework that governs economic relations between Israel and the PA despite the signing of a new agreement in 2012, essentially ties the Palestinian economy to that of Israel, with the former being completely dependent on the latter. Israel has full control over external borders and collection of import taxes and VAT, which it then transfers to the Palestinian Authority. Over the years, the Israeli government has repeatedly retained tax revenues as a means of putting pressure on the Palestinian government. 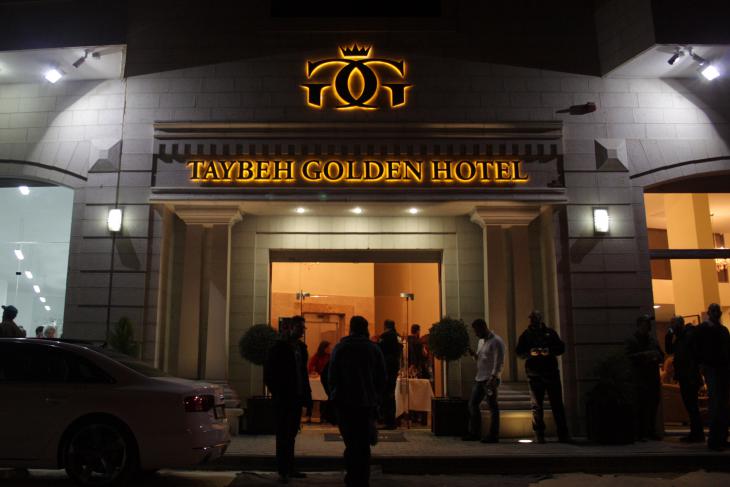 The Khoury family hope that the Taybeh Golden Hotel will help turn the small Christian village in the West Bank into a high-end tourism destination. The 80-room hotel will be aimed at pilgrims to the Holy Land. "However," writes Ylenia Gostoli, "political instability greatly affects tourism in the West Bank. Following the latest offensive on Gaza, the number of visitors plummeted"

"When I came in 1994 there was no shortage of water," he adds. "Now there are more settlements and less rain. The settlements are using most of the water."

An existing winery in the West Bank, run by monks near Bethlehem, is threatened with a less fortunate fate due to the planned construction of the separation wall through the Cremisan Valley.

"Building a sustainable business, creating jobs, is the only way to build the state of Palestine," argues Nadim Khoury, "it's a chain of benefits to everybody. We need to encourage more Palestinians abroad to come back and build Palestine." The winery currently employs four workers, the brewery 15. The hotel, says its owner, will employ at least 40 once it's opened.

Many however, remain sceptical about the concept of an "economic liberation" under the current conditions, where any business in the Occupied Territories depends to a certain extent on maintaining good (and profitable) relations with Israel.

"I think we as Palestinians have a lot to do and to bring, but we should be doing a lot more than bringing expensive wine-tasting to small Palestinian villages," said Karam, 26, from Ramallah, as Mina Band – a Palestinian traditional music ensemble – starts playing dabke music in the brightly-lit hall. It seems that for a Palestinian economic miracle to begin, the locals might need to do more than just turn water into wine.

Home
Print
Newsletter
More on this topic
Women's centre "Bait al Karama": Nablus is cooking again!Protest and culture in Palestine: Make art, not warRebuilding Gaza: Left out in the coldRebuilding Gaza: The back of the Gazan economy has been broken
Related Topics
Christians in the Islamic world, Development aid, Economy, Israeli settlement, Israeli-Palestinian conflict, Israeli-Palestinian dialogue, Places of Dialogue
All Topics

A leading light of Israeli theatre, Ofir Henig has directed the Israel Festival and is the only female director to have been awarded the Israel Theatre Prize. These days, however ... END_OF_DOCUMENT_TOKEN_TO_BE_REPLACED

With the current leadership of Iran quick to lay the blame for the Iran protests on Israel, the chances of harmonious relations between the two countries still seems remote. Yet, ... END_OF_DOCUMENT_TOKEN_TO_BE_REPLACED

Daniel Barenboim is not only a world-famous pianist and conductor. He has also worked tirelessly to foster understanding and reconciliation between Palestinians and Israelis. By ... END_OF_DOCUMENT_TOKEN_TO_BE_REPLACED

After a two-year hiatus, the Arab League re-convened at the beginning of November in Algiers against a backdrop of uncertainty and discord. By Pierre Boussel END_OF_DOCUMENT_TOKEN_TO_BE_REPLACED

On 1 November, elections are set to take place in Israel for the fifth time in four years. If Arab minority voters decide to stay home out of frustration at their divided parties ... END_OF_DOCUMENT_TOKEN_TO_BE_REPLACED
Author:
Ylenia Gostoli
Date:
Mail:
Send via mail

END_OF_DOCUMENT_TOKEN_TO_BE_REPLACED
Social media
and networks
Subscribe to our
newsletter