Skip to main content
The Trance-scendental Brotherhood of the Gnawa

Religious Practice as a Therapeutic Act

Although the Gnawa consider themselves devout Muslims, they are increasingly exposed to criticism from orthodox Islamists. Andreas Kirchgäßner attended a "night of trance" in Essaouira, Morocco and looked into the diverse roots of the religious order

​​Since Randy Weston, Jimmy Hendrix, and Cat Stevens made pilgrimages to them in southern Morocco, and since Bob Marley, Peter Gabriel, and Carlos Santana made music with them, music lovers have been familiar with their fascinating bass lines and polyrhythmic drums.

Little known, however, are the rituals and therapeutic practices of the brotherhood of the Gnawa, who originally came from western Sudan.

Although every Moroccan first of all associates the word "Gnawa" with black people, for a long time not all Gnawa have been black. As a result of intermarriage and assimilation, today there are light-skinned as well as black Gnawa. The Gnawa are not an ethnic group but evidence of West Africa's cultural influence on Morocco. And nowhere in Morocco is "Africanism" as strongly represented as in the southern Moroccan seaport of Essaouira.

Around the year 1770, Sultan Muhammad ibn Abdullah commissioned the French architect Théodore Cornut to design the city according to European models. Pirates had captured Cornut during a naval raid and handed him over to the Sultan as a prisoner. With Cornut's help, the Sultan developed Essaouira into the most important commercial center of his kingdom, linking the caravans from Timbuktu with the maritime trading routes to Europe and the New World.

From Africa came not only ivory, gold dust, and ostrich feathers but slaves as well. In its heyday, Essaouira was home to commercial establishments from all over Europe, seventeen consulates, and thousands of Jews, who could guarantee the best trading contacts throughout the world.

Within this melting pot the black slaves organized themselves as the brotherhood of the Gnawa and combined their cults with Berber influences and the Arab tradition of Sufism.

Lila, the night of the trance

In order to learn more about the Gnawa, we go to see the Master, Abdellah Guinea. In the darkness we grope our way along the wall up a steep flight of stairs to his home. Upstairs we are standing in blood. A large slaughtered goat hangs in the doorway. They have sprinkled blood on the floor and have taken a drink of it. That is sacrilege in Islam. But the Gnawa have to violate a few taboos in order to contact the spirits. 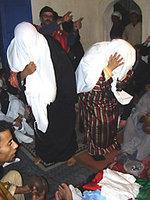 ​​During the ensuing night we experience one of their twelve-hour ceremonies, which they call lila. Guinea and the other Gnawa have put on colorful costumes. In a procession they go to a house expressly rented for the occasion. During the procession they play the tbel, a large drum that drives away evil spirits and makes room for the arrival of the Mlouk (master spirits). Women and children walk in front of the procession with candles, dates, and milk – offerings for the spirits.

Then we sit close together in the small inner courtyard of the house. With his guembri, a large, three-stringed bass lute, Guinea is the undisputed leader of the event. He begins to play "Auled Bambara," the "remembrances." His followers dance the story of the life of their black ancestors. With a fake gun they act out hunting, gathering, but also their enslavement. Far into the night, olives, goat meat, and flatbread are served on large platters.

The journey to the spirits

Thus fortified, the nasha, the actual journey to the spirits, begins.

Incense and herbs are burned during the prayers. Women are dancing in the center, bent over forwards. The master of ceremonies, the Moqadem, has thrown white cloths over them – the cloths of the Melk AbdelKadder Jilani, who opens the gates to the world of the spirits. They are followed by black cloths, the color of the Mimoun, the black African.

New dancers appear, including a few young men. Then comes blue, the color of the sea and the prophet Moses. The first dancer falls down. He is carried into the outer room and sprinkled with rose water.

Sidi Hammou, master of the slaughterhouses. The Moqadem wields a knife as he dances; it is difficult to see whether he actually cuts himself. The lead singers and chorus chant in constant alternation. The guembri (a kind of Berber lute, the ed.) plays the bass line. The krakebs, metal castanets, clatter. Green, the color of the Prophet and his descendants. Then, once again, black, the color of the people of the forest. The rhythms are mesmerizing.

The small dance floor now belongs to the women – the color yellow. The light fades. The cloths fall off. The women's long hair flies back and forth. Only the candles are burning. Lala Aisha and the demonic spirits are there. A woman falls down. The Moqadem carries her out. Another woman falls. The free-flowing hair, ecstatic movements, the cries – everything is charged with eroticism. All around women are lying on mattresses.

During the trance a union with God takes place in which the sick person is cured and "baraka," the divine blessing, is bestowed.

In contrast to "official" Islam, which exercises political and religious power and is dominated by men, the main concern of the Gnawa cult is coping with everyday life. Its adherents – over 90% of whom are women – use magical practices to appease the spirits and demons, whom they blame for their suffering. Religious practice thus becomes a therapeutic act that serves as an effective safety valve for them.

Although the Gnawa consider themselves devout Muslims and frequently recite verses from the Koran in their songs, they are increasingly exposed to criticism from "political Islam."

Said, my young Islamist interview partner, went so far as to claim that the Gnawa were brought to Essaouira by Jews. As a matter of fact, the Gnawa have black African, Berber, Muslim, Jewish, and, in a few cases, even Christian spirits. Said regards their unrestrained dealings with these "strangers" as a threat.

"Does the Koran say, for example, that during prayers there will be singing, music, or even dancing?" he asks, and finally deplores the decline in morality when young people from Morocco and Europe come to Essaouira in tight jeans and miniskirts to hear the Gnawa.

END_OF_DOCUMENT_TOKEN_TO_BE_REPLACED
Social media
and networks
Subscribe to our
newsletter