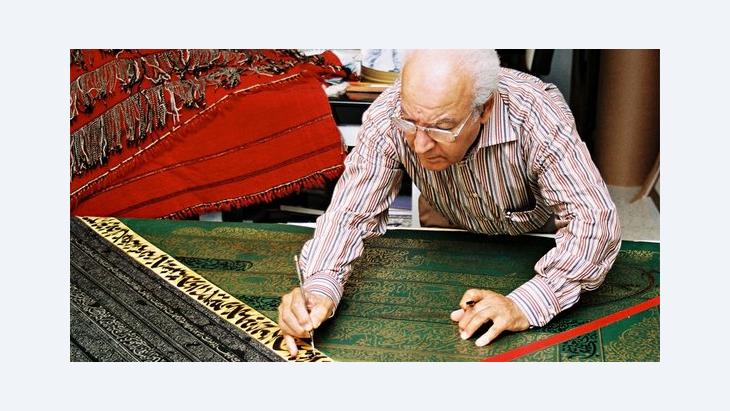 Though often referred to as a "choreographer of letters", the Tunisian calligrapher Nja Mahdaoui is, strictly speaking, not really a calligrapher at all, and the signs that are the characteristic symbols of his work are not really letters. By Sarah Mersch

"Visual artist would probably be closest to what I am," Nja Mahdaoui answers with a smile when asked how he would best define himself. His inspiration comes from Arab calligraphy, but the signs he works with, whether on paper, carpets, aeroplanes or entire building complexes, are never just straightforward characters. Abstract forms combine into rhythmic compositions, individual letters entwine and interlace on paper without ever giving a hint of any verbal meaning.

Mahdaoui is adamant that his abstraction of such religiously charged script is in no way sacrilegious. "This abstraction is tolerated by all those who are aware that there were schools in existence in the past where abstraction was practiced." 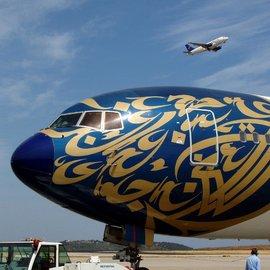 ​​He draws a distinction, therefore, between the skill of the copyist, a person trained in the precise reproduction of the centuries-old script and someone like himself, for whom "the letters are to be seen as the foundation, the structure, possessed of a nobility, not simply objects to be viewed in terms of narrow definitions of culture."

Contact to foreign artists is something he sees as very important for his own work. Born in Tunis in 1937, Mahdaoui studied in Rome and Paris. When his studies ended he returned to Tunis, but he still remains in constant touch with other painters and visual artists.

For some years he worked with German water-colourist and paper artist Wolfgang Heuwinkel – a collaboration which has had a lasting impact on Mahdaoui. Heuwinkel worked with sheets of paper, painting and tearing them before sending them off from Bergisch Gladbach in Germany to Tunis where Nja Mahdaoui would then work on them.

For years their communication was at a distance, until, eventually, they decided they would work on a project together. "We had an enormous sheet of paper and worked on a side each", Mahdaoui explains. As Heuwinkel began tearing the paper, however, Mahdaoui decided enough was enough. "Just hearing that sound was like a physical shock for me." Even now, more than fifteen years after the event, the recollection still sends shivers down his spine.

In search of innovation

The experience did not, however, put a stop to the Tunisian's search for innovation, for new techniques and materials. In 1990 Mahdaoui created the design to adorn the aircraft of the new Gulf Air fleet. Last year he went to the Meissen factory and worked with porcelain for the first time. "That was something very new and exciting for me. I was forced to start from scratch because the colours and the tools I had to use were very different." 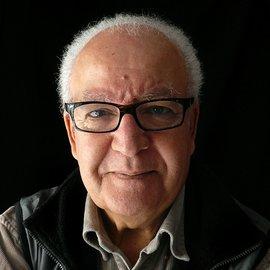 Choreographer of letters: Nja Mahdaoui is considered one of the most important contemporary artists from Tunisia and the Maghreb region

​​Mahdaoui pulls his smartphone from his pocket and shows me photographs of one very special piece of work. One of his biggest projects in recent years was the design of the artwork for a mosque – now part of the state-of-the-art campus of the King Abdullah University of Science and Technology in Saudi Arabia. The picture shows a rectangular, almost Spartan-looking minaret rising above another, also apparently equally simple building. The large window of the prayer hall is covered by Mahdaoui's large metal screen, an abstraction of Arabic characters; it is a design that creates a play of light and shadow on the floor within.

When he talks about this project it is apparent that the artist is still astonished that such a project was ever able to come to fruition in the strict religious society of Saudi Arabia.

Respect for the tradition, though, is something that is important to Mahdaoui; very often it is even provides a source of inspiration. Traditional Tunisian objects and materials, such as drums, silk fabrics and carpets, feature in many of his works. "But one must never simply reproduce them. That would be social and intellectual suicide," he insists, elegantly drawing the line between art and the political situation in his homeland.

Vital exchange with other cultures

"We have to take a look at what the critical structures and elements are today that are likely to go on to shape our future." He believes that only contact and exchange with other cultures will allow Tunisia to move forward, "everything else leads to inner exile and to the self-destruction of an entire society." 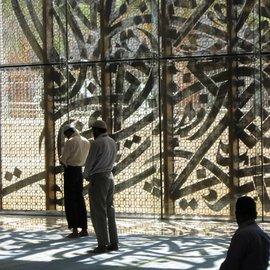 Calligraphic shadow play to accompany prayer: the artist's vision has been realised even in the strict religious atmosphere of Saudi Arabia

​​Mahdaoui follows events in Tunisia very closely but also maintains an objective distance. Political events, he claims, do not influence his work and the idea of revolution is something he rejects. The newly won freedoms have given the younger artists the courage to break taboos, he says. But his own work, at first glance abstract and apolitical, yet modernist in its philosophy, was not affected by the upheavals in Tunisia.

When Mahdaoui talks, there is a subtle oscillation between cultural and political analysis. A writer friend of his had found the appropriate expression: the backward-looking, the retrogressive, those who oppose the modernisation of society "are the builders of ruins. Ruins are a testimony of the past. We must build the future." And that, according to Nja Mahdaoui, means both artistically and politically.

END_OF_DOCUMENT_TOKEN_TO_BE_REPLACED
Social media
and networks
Subscribe to our
newsletter