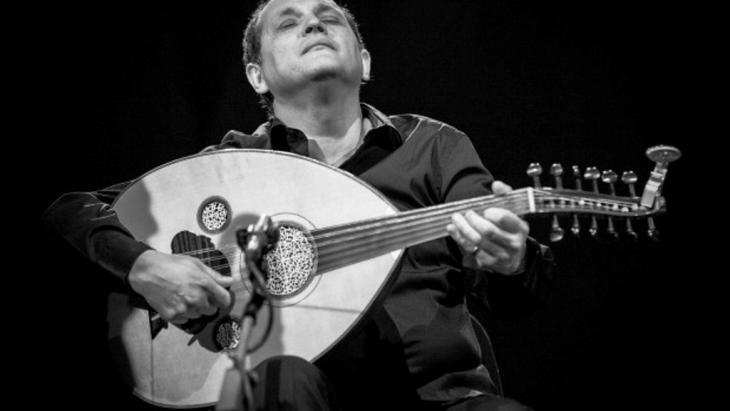 Anouar Brahem, perhaps Tunisia's best-known musician, recently brought his latest work to the stage and surprised the audience with his musical interpretation of the Jasmine Revolution of 2011. By Sarah Mersch

"Souvenance" (recollection) is the title of the new work that Anouar Brahem presented at the opening of this year's Carthage International Festival. An audience of more than six thousand came to hear him on this evening in Ramadan. After all, Brahem rarely performs in his home country.

The 56-year-old musician, whose fame has spread far beyond Tunisia's borders, hasn't released a new album in six years, and hasn't performed in Carthage's amphitheatre in over 20, preferring instead to seek out smaller venues. The anticipation was therefore all the greater, and the piece that Brahem chose for the occasion was far from straightforward.

The opening is light and catchy: this is the lutenist people know from his most recent albums. This time, in addition to his regular jazz ensemble of bass (Björn Meyer), bass clarinet (Klaus Gesing) and piano (Francois Couturier), Brahem is joined by the Tallinn Chamber Orchestra. The sounds of the oud flow into the bass notes, and mingle over and over with the strings of the chamber orchestra. Brahem clearly hangs back, leaving the arena to his musicians. Much of the music sounds familiar, like something we have heard from Brahem somewhere before: there are few surprises, and the performance continually threatens to tip over into indulgence. All of a sudden the tone suddenly changes.

The calm and the storm that followed

After a half to three-quarters of an hour, something changes on stage: the sounds become more unwieldy and powerful; Brahem takes the rudder back into his own hands. A short while later, a silent film suddenly flickers across the screen behind the orchestra: men and women, doctors and civilians crowd into a hospital, their silent mouths screaming. "Kasserine Hospital, 10 January 2011" reads a caption at the end. On this night, three days before the country's leader Ben Ali fled, the city in western Tunisia saw the worst fighting there had been up to that point, with many fatalities. The piece that follows features the background sounds of a demonstration coming from loudspeakers, sometimes barely audible between the musicians' notes.

The structure of the work reflects the story of its creation. Before the turmoil in Tunisia, Brahem had started work on a new album. Then the dictator fled, the parameters in his homeland were shifted and the musician took some time to reorient himself. It was only with the elections in 2011, nine months later, that he was able to get back to work. What followed was "Souvenance" in its present form. The difference between the calm, casual first section and the much darker, more forceful second part is clearly audible. 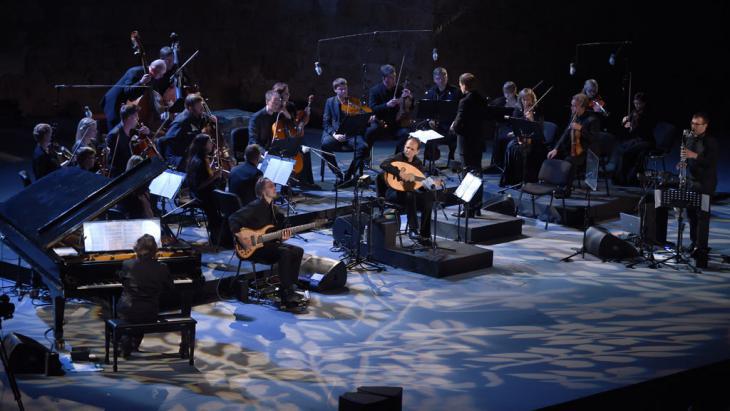 At times calm and restrained, at times dark and powerful: the Tunisian oud virtuoso and composer Anouar Brahem performing on stage at the Carthage International Festival 2014 in Tunisia. It was the first time in over 20 years that Brahem had performed in the city's amphitheatre

The politicisation of music

This is not the first time Brahem has referred to contemporary history in his works. His previous album, "The Astounding Eyes of Rita" (2008), referenced a poem by the late Palestinian poet Mahmoud Darwish. Nevertheless, the influence of current events has never been as clearly visible and audible as it is in "Souvenance". The clear break in the middle of this work and the shifts that run through the pieces are so obvious in the composition itself that the video and audio recordings were not strictly necessary in order for people to understand the context.

In spite of Brahem's obvious tension, he plays fluidly with his ensemble. Francois Couturier complements the sounds of the oud with his usual restraint, while the bassist, Björn Meyer, continually drives the rhythm forward. Brahem exchanges frequent, barely perceptible complicit glances with Klaus Gesing, whose reactions with his bass clarinet are at times subtle, at times forceful. The chamber orchestra, however, repeatedly threatens to overwhelm the soft nuances in Brahem's playing, taking away the oud's sometimes rough, almost rustic character.

Brahem has planned several more concerts in Europe over the coming months prior to the release of his new album.

Tunisia is considered a paragon of the Arab Spring. Despite democratic reforms, however, a mood of political frustration and economic despair still prevails, particularly among ... END_OF_DOCUMENT_TOKEN_TO_BE_REPLACED

Equality in divorce, a ban on polygamy: reformers of Islamic family law have a clear agenda. They are exploiting the ambiguity of traditional jurisprudence. By Joseph Croitoru END_OF_DOCUMENT_TOKEN_TO_BE_REPLACED

Hassan Aourid is one of the most important political and intellectual figures in Morocco. In interview with Ismail Azzam for Qantara, Aourid outlines his vision of the decline of ... END_OF_DOCUMENT_TOKEN_TO_BE_REPLACED

The Arab world is one gigantic pressure cooker. For the most part the lid of repression is on, but it is boiling over with increasing frequency. Whether in Lebanon, Iraq or in ... END_OF_DOCUMENT_TOKEN_TO_BE_REPLACED

In his new film, award-winning Tunisian director Nouri Bouzid grapples with the traumas of women held captive by Islamist extremists, victims of the so-called ʺsexual jihadʺ in ... END_OF_DOCUMENT_TOKEN_TO_BE_REPLACED