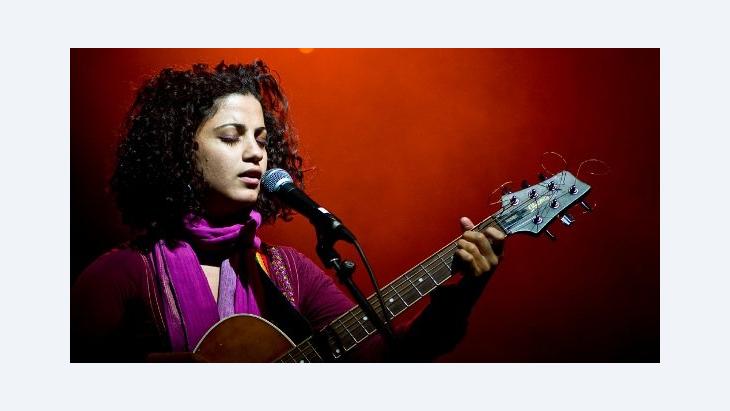 The young Tunisian singer Emel Mathlouthi left her mark on the Tunisian revolution with her song "Kelmti Horra" (My Word Is Free). Martina Sabra met with the politically engaged artist in Cologne, Germany

It has been a year since the dictator Ben Ali fled Tunisia. You were in Tunisia at the time and you suddenly became famous with your song "Kelmti Horra" (My Word Is Free). How did this come about?

Emel Mathlouthi: I was in Tunis just before the revolution and sang on the street at a sit-in. By chance, someone recorded me on their mobile phone and posted the video on YouTube. All at once, the whole media jumped in. I was completely perplexed, because I had already sent a demo CD to different radio stations, but no one had ever responded. And then suddenly, the song was playing everywhere. Once, a car drove by and I could hear my own voice from the car radio. It was a really strange feeling!

After almost six decades of dictatorship, the first democratic elections took place in Tunisia in October last year. The Islamists were the clear winners. What is the mood among young people? After all, they played a decisive role in their support for the revolution.

Emel Mathlouthi: Many of them are quite critical. They are not pleased with the new government – one gets the impression that it is trying to turn back the clock. And then there are so many ministers – almost fifty. That is simply too many! But I think that people should give the current government at least six months to achieve something. The most important thing now is to take action against hunger and unemployment. 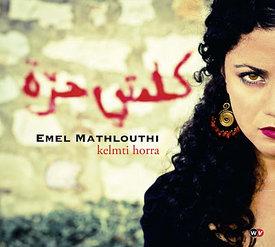 Words of Freedom: Emel Mathlouthi's album is meant to pay homage to all the people who lost their lives during the revolution in order to free the country from its dictatorship

​​It is certainly not ideal that the Islamists won the election. Personally, I have a different world view. But I think that even in this government and among the Islamists there are some very qualified people. And the politicians are under pressure. They have to show results. They know that otherwise people are prepared to return to the streets at any time.

In 2008, you went to France. Had there been problems with censorship in Tunisia?

Emel Mathlouthi: It is pretty well known that Ben Ali's political apparatus was quite dim-witted. And over the course of time, it became even more stupid. Ben Ali and his people never really understood the danger posed to them by new music for the Tunisian youth. And this was even though the possibilities for music were, as a whole, very limited. I couldn't perform on television or on radio.

For someone like me, it is really bad not to be known in your own country. I sing in the Tunisian dialect. My music is Tunisian and all of my songs have to do with life in Tunisia. In 2008, I went to France to expand my horizon and to further my career. It was exactly the right thing to do and the result is paradoxical. When I arrived in France, Tunisians on the Internet suddenly began to recognize me as someone standing up for Tunisia through music.

In late January, your first international album, "Kelmti Horra," appeared. How did this album come about?

Emel Mathlouthi: The album is made up of songs that I wrote between 2006 and 2011. Both the lyrics and the music were equally important for me. All of the songs have to do with Tunisia, the dictatorship, frustration about tyranny, and, of course, with freedom. The album bears the title "My Word Is Free" and it is meant to pay homage to all the people who lost their lives during the revolution so that we could live in a free Tunisia.

In terms of music, I tried to include all the ideas and influences that I had gathered over the years – Arab protest songs, as well as rock, pop, and all the things I heard when I was growing up. We also experimented and I think that this is the best way to make music.

How important is it for you that your songs have a political message?

Emel Mathlouthi: I asked myself for a long time whether I should go into politics. Then, I would be a politician who makes music. But it became clear to me that I feel best up on stage. I am first and foremost a musician.

Of course, I will attend demonstrations in the future and provide support to NGOs. But I have to sing, I have to make music. And I absolutely don't want people to recognize me just because I sang for the revolution. I want to be appreciated for the work that I do.

We did a great deal of research for this album. We worked very hard on the arrangements and on the sounds. I think people will hear this. The album should be seen as a whole. Even though not all songs specifically refer to freedom or revolution, the music on the album is very much shaped by these ideas.

Home
Print
Newsletter
More on this topic
Tunisia's Art Scene after the Overthrow of Ben Ali: Politics as InspirationGraffiti in Tunisia: A Weapon for Civil ResistanceThe Soundtrack of the Arab Spring: Pop, Pathos, and Poetry
Related Topics
All Topics
Date:
Mail:
Send via mail

END_OF_DOCUMENT_TOKEN_TO_BE_REPLACED
Social media
and networks
Subscribe to our
newsletter