Skip to main content
The Turkish AKP as Role Model for the Arab World?

Turkey's ruling AK Party is seen by many Western politicians as a model for political change among the Islamist parties in the Arab world. It is a view, however, that fails to recognise that the most noteworthy elements of the Turkish experience in dealing with Islamism are hardly likely to be successful in the Arab countries 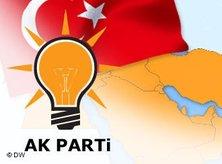 The AKP as shining example of a moderate Islamist party in the Arab world? Not as long as they continue to hold fast to their outdated ideological concepts and historical narratives, says Mudhoon

​​In the wake of the 9/11 terror attacks and as the massive shock waves continued to reverberate, the international debate on the role of the Turkish Republic as an exemplary development model for the modernisation of Islamic countries in the Middle East took on a new urgency both at the academic level and among the political elites and their think tanks.

Since then, Turkey's exemplary role as a model for moderate Islam's potential to partner the West in an alliance for peace against global threats, while providing a middle way between radical Islamism and a hardly credible "state Islam", has been as much of a favourite subject among Western politicians, as it has been with the religious-democratic conservatives of the Turkish AKP government.

Barack Obama, too, seems to have recognised the geopolitical significance of a functioning and credible "model state" when it comes to making democracy, pluralism, rule of law – all of them genuine achievements of Western-style modernity – compatible with Islam. This, apparently, was what lay behind the US president's call for the predominantly Muslim country to be admitted to the European Union, during his visit in April 2009. 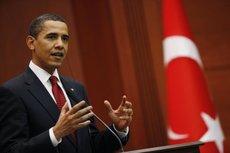 Belief in the compatibility of democracy, pluralism and rule of law with Islam: US-president Barack Obama addresses the Turkish parliament in April 2009

​​Closer inspection, however, reveals that this perception does not take sufficient account of the underlying differences between present day Turkey and most of the Arab states. Moreover, in many ways, Turkey represents something of a special case within the Islamic world. Along with Indonesia, Turkey is one of the few functioning Muslim secular democracies – even if it is one with undeniable shortcomings. And it is one of the very few Muslim states where Islam has not been institutionalized as the state religion or as the central source of legislation.

At the same time, secularism is firmly rooted as the most important guiding principle in the Turkish constitution. And, there is no other predominantly Muslim country where religion has been so far ousted from public and political life as is the case in Turkey.

The AKP as the first Islamic-conservative-democratic party?

Prior to the major reforms within the ruling AK party (2002–2005), it would hardly have been possible to present Turkey credibly as a "true" model for the compatibility of democracy and Islam in the Arab world. The lack of real democracy in the country was all too obvious, particularly when it came to the role of the Turkish armed forces in the political decision-making process.

Dubious reputation in the Arab world: given the power of the country's generals and their Western orientation Turkey has tended to be seen as a "military democracy" controlled by the West

​​The role of the Turkish military is still seen positively by the majority of the Turkish population, and in contrast to almost all of the country's Arab neighbors, the Turkish military has never sought the permanent establishment of a military dictatorship. However, given the power of the country's generals and their Western orientation, the Arab countries have tended to view Turkey as a "military democracy" controlled by the West, and one which has been suffering from a severe identity crisis since the abolition of the Ottoman Caliphate and the forced secularization from above.

From the conservative Arab point of view, the strictly secular political order in Turkey is a contributing factor in the consolidation of such misconceptions, as seen, for example, with the headscarf ban in universities. Although the ban was lifted in 2008, the reverberations of that debate can still be felt in Turkey's image in most of the Arab world as an "anti-religious" country. The evident disinterest on the part of the republic's founders to making a commitment to the region, which they saw as backward, has also undoubtedly contributed to the Arab-Turkish estrangement.

A historic turning point for the Arab image of Turkey came at the beginning of March 2003, when the Turkish parliament voted against giving their support to the US-led invasion of Iraq.

The US government was forced to accept the vote because it came from a proper, democratically elected parliament. It was a decision that was met with admiration throughout the Arab world, from the conservative elites as much as from the ordinary people. Most remarkable were the positive reactions to the successful "AKP experiment" by moderate Islamists in the heartland of Islam; many Arab commentators seeing it as something that would encourage Arab Islamists to reform and to participation in the political process.

AKP: not a model for Arab Islamists

This sudden enthusiasm for the successes of the AKP, however, could not hide the fact that the undoubtedly remarkable Turkish experience in dealing with Islamism is something hardly likely to be transferrable to any of the Arab countries or their Islamic (or Islamist) groups.

Dependent on the will of the authoritarian Mubarak regime and struggling for their own political survival: the old leadership of the Egyptian Muslim Brotherhood, led by Mohammed Badie

​​Besides, any possible exemplary role for the AKP is already limited by the fact that the political and socio-economic conditions in Turkey today are fundamentally different from those prevailing in the various Arab states. In contrast to these Arab states the Turkish republic already has a democratic tradition. This includes not only respect for the political system and its institutions, which has generally been a characteristic of the political set-up and its participants throughout the history of the republic, but also a liberal and critical public discourse, which the Arab states do not have in anything like the same degree, and which is of essential importance for a democratic political culture.

Moreover, it was the Turkish democracy that made the emergence of the AKP possible in the first place – and in so doing gave the (post) Islamists the opportunity to politically express themselves and to mature into a more responsible and predictable government party.

It is also the case that the political military elite in Turkey has generally tended to be tolerant of the Islamic forces in their own country, they have permitted them to express their own internal discourse even if they have always put a stop to their supposed attempts to seize power. This sort of freedom to develop and express themselves is thus far unknown to the Arab Islamists.

Authoritarian Arab regimes are the main obstacle to the further political development of the Islamist parties, who struggle just to ensure their survival. This means that certain conditions are necessary if these movements are to reach maturity – first and foremost, the ruling Arab elites must be prepared to introduce some fundamental reforms in order to ensure a minimum of democratic freedom and participation.

Another key aspect is the economic trade advantage over the majority of Arab countries that Turkey enjoys. The awakening of the strong man on the Bosphorus has also brought the emergence of a new urban elite. In Turkey it is a religious but largely pragmatic middle-class that is rising in importance. This new Anatolian elite takes its ethics from Islam, but at the same time supports the free market and compliance with the standards of good governance.

In contrast, most Arab Islamist parties continue to hold fast to outdated ideological concepts and historical narratives – without any prospect of real political participation or a transformation towards democracy and the rule of law.

Reform Policies of the Turkish AK Party
Setting an Example for Arab Islamists?
Many still regard the experiment represented by the Islamic AK Party with skepticism. Nevertheless, there is hope that the party could develop into a reform model for political change among the Islamic movements in the Arab world. By Slaheddine Jourchi

Turkey and the Arab World
Arabs Look to Istanbul
Turkey is not wavering in the slightest from its pro-European course. Nevertheless, as a trading nation with a dynamic economy that is the living proof of the fact that Islam, a secular political landscape and a parliamentary democracy are indeed compatible, it has in recent times rediscovered its Arab neighbours. Rainer Hermann reports

END_OF_DOCUMENT_TOKEN_TO_BE_REPLACED
Social media
and networks
Subscribe to our
newsletter