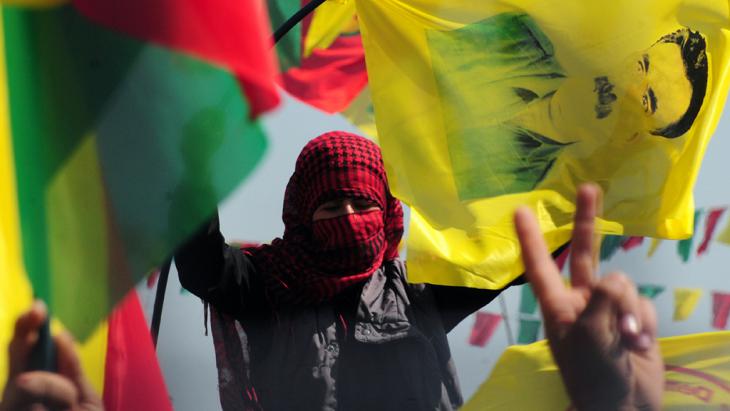 The Turkish-Kurdish conflict
Friend and foe

The Kurdish PKK and the Turkish government are both relying on a number of local and regional allies – in a conflict, inextricably linked to the war in Syria, which is likely to rumble on for years to come. An analysis by Cengiz Candar

Though the renewed war between the Turkish state and Kurdistan Workers′ Party (PKK) has been going on for less than a year, it has already taken a heavy humanitarian toll, overshadowing the conflict′s previously deadliest period in 1990s.

According to UNESCO, around 350,000 people were displaced as of March 2016. That figure has likely climbed much higher following the end of operations on 3 June in the now-deserted cities of Nusaybin on the Syrian border and Sirnak.

Over the past ten months, over 500 security forces have been killed; the Turkish General Staff issued a statement on 7 June alleging that an additional thousand PKK fighters had been killed in Nusaybin and Sirnak. This simmering civil war serves as fodder for further radicalisation and violence, leaving both sides few incentives to return to the negotiating table.

During the first Kurdish insurgency of the 1990s, the theatre of war between the Turkish state and the PKK was mainly the rugged terrain of mountains of Turkey′s Kurdish countryside. In contrast, the current conflict is being waged in urban centres, making many wary of a violent backlash in cities in Turkey′s west, such as the terrorist bombings and suicide missions that occurred in Ankara earlier in 2016. On 17 February, one of those bombings killed 28 and injured 60. On 13 March, another bombing killed over 30 and injured over 100.

The Turkish government blamed both attacks on Kurdish nationalists; however an even earlier bombing on 10 October 2015 in Ankara that killed over a hundred peace activists at a rally that was partly organised by the pro-Kurdish Peoples′ Democratic Party (HDP) remains largely unexplained. Those bombings poisoned the already negative psychological climate between Turks and Kurds, deepening these different national identities and juxtaposing them in opposition to one another. 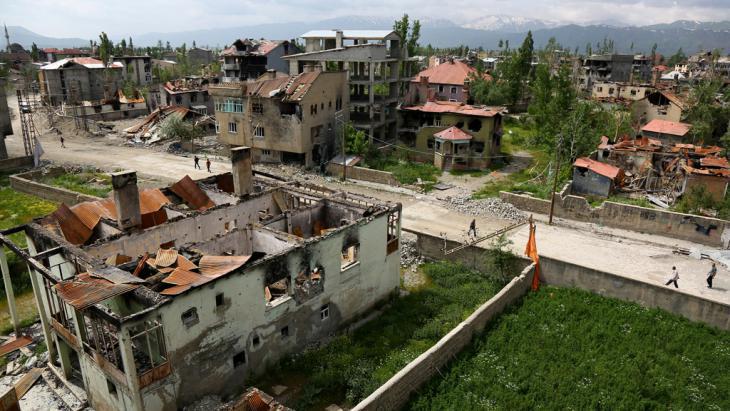 Return to war: Yuksekova, located in Turkey′s predominantly Kurdish southeast, has suffered considerable damage during fighting between government forces and Kurdish rebels in recent weeks. Last winter the Turkish army pursued similar tactics against Kurdish militants holed up in Cizre. The pro-Kurdish HDP accused the government in Ankara of a civilian massacre in Cizre. The Turkish Foundation for Human Rights (TIHV) recorded at least 178 civilian deaths

Yet though both sides have suffered casualties, the conflict has not yet reached a mutually hurting stalemate that would push them to reach a deal. The Turkish state and the PKK have long found the human costs of fighting tolerable and in the current conflict losses are compensated by waves of new recruits. Desperate Kurdish youth are increasingly dubious about the possibility for a peaceful settlement of the conflict and many feel alienated and discriminated against by the government. As a result, many are taking refuge in the ranks of the PKK, an outlet for their newfound militancy.

On the Turkish side, as long as President Erdogan continues to consolidate his power by allying with the Turkish military, which is determined to inflict deadly blows on the PKK and seems able to absorb any losses, the conflict, in its present format, will not run out of steam.

For Erdogan this conflict continues to strengthen his nationalist constituency, allowing him to outstrip his rivals and potential competitors. Erdogan′s increasingly nationalist rhetoric, which has pitted Turks against external and internal enemies alike, has also legitimised his quest to kick out of the Turkish parliament members of HDP, the pro-Kurdish party.

On 7 June, exactly one year after parliamentary elections that saw AKP lose its majority, Erdogan approved a law stripping parliamentarians of their immunity to prosecution. HDP currently holds 59 out of 550 seats in parliament and nearly all of these MPs are the subject of hundreds of separate fezleke (criminal investigations) including allegations of connections to the PKK. 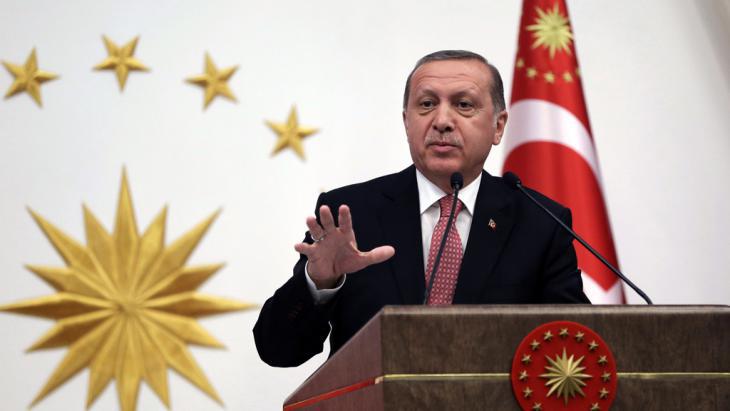 Heading for a presidential system: at Erdogan′s insistence, more than a quarter of Turkey′s elected MPs have been stripped of their immunity. The new legislation is mainly directed at MPs belonging to the pro-Kurdish HDP. Most of them have also been accused of terrorism. The party has since declared that it is not prepared to co-operate with the Justice Department, which it claims is under Erdogan′s influence. HDP representatives fear being arrested. Almost the entire HDP parliamentary group, comprising 59 MPs, is affected

If these investigations proceed to successful prosecutions and imprisonment, this would leave HDP seats vacant and pro-Erdogan candidates would be likely to fill them in the event of by-elections. With their support, it would be easier for Erdogan to gain the majority of MPs needed to change the constitution to make official the new de facto presidential government system that Erdogan has created. However, this also leaves no room to return to peace talks and would exacerbate the feeling of dispossession among Kurdish youth, again driving them to violence.

Allies on all sides

As for the PKK, it feels emboldened by the co-operation it enjoys in Syria with the United States, Russia and even (reportedly) Iran. In its determined fight against the Islamic State (IS), Washington is more dependent than ever on the People′s Protection Units (YPG), its Syrian Kurdish allies on the ground, particularly in Raqqa. The YPG, the armed wing of the Syrian Kurdish Party of Democratic Union (PYD), shares ideology, military co-operation and personnel with the PKK, which is in turn benefiting from the rising frictions between Ankara and Washington on Syria, as well as the deteriorating relations between Ankara and Moscow.

Turkey, a long-time NATO ally of the United States, proved very reluctant - if not unwilling - to fight IS, in part because for the quasi-Islamists in power in Ankara, the Islamic State is a member of the larger Sunni family in the Middle East, which is undergoing sectarian strife across the region. 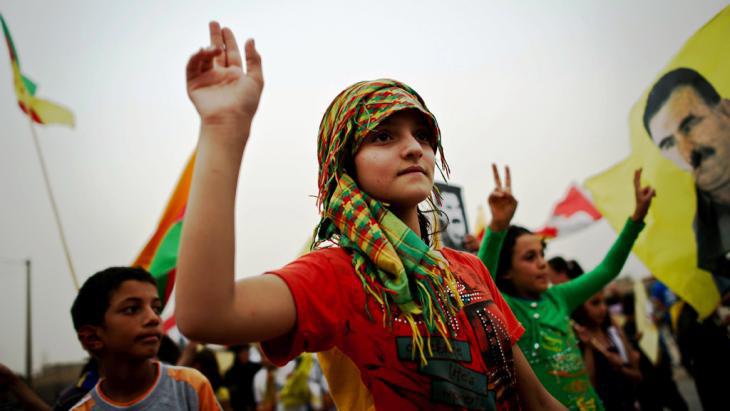 Confrontation rather than reconciliation: since 1984, more than 40,000 people have been killed in fighting in southeastern Turkey. With the breakdown of a two-year ceasefire last summer, fighting erupted again. In recent months, young supporters of the outlawed PKK have brought the conflict into the towns. By fighting behind barricades they hope to rally the local population behind their cause

For Erdogan, the PYD and the YPG in Syria are terrorist organisations no different than the PKK or IS and supporting them is the equivalent of allying with terrorism against Turkey′s interests. In addition, the Turkish government sees IS preventing the Syrian Kurds from achieving self-rule across the entirety of the largely Kurdish territory of Rojava – a situation many in Ankara believe could have a contagious effect on Kurds on the Turkish side of the frontier.

For these reasons, Erdogan hammers the United States almost daily for betraying ″its ally″ and not keeping its promises to him – language that suggests Erdogan is referring to his private conversations with U.S. President Barack Obama.

There are clear signs the United States is frustrated with Turkey as well, with one Obama administration official telling the New York Times Magazine on 29 May that ″post-Paris, post-Brussels, we have to clear IS out. If it turns out that the coalition can′t operate in that space, [′because of Turkey′s conflict with the Kurds,′ the reporter inserts into the quotation] then we have a serious problem.″

The latest developments in the Turkish-Syrian theatre reflect the intractable nature of the Kurdish problem for nation-states in the Middle East and have the potential to steer the region into further chaos and disintegration. After the latest and the most hopeful peace process collapsed in July 2015, growing violence indicates Turkey′s Kurdish question has entered its bloodiest episode yet.

There have always been ups and downs between the Turkish government and the PKK over the quest for a political settlement. This time, however, the violence is obscuring any hope of an exit to the current deadlock for the foreseeable future.

Cengiz Candar is Middle East expert, Turkish journalist and visiting lecturer at the University of Stockholm where he is currently writing a book about the failed peace process between Turkey and its Kurdish minority.

Home
Print
Newsletter
More on this topic
Turkey and the Kurdish conflict: The desolation of CizreDiyarbakir and the Turkish military offensive: The spoils of urban warfareTurkey: interview with Bilgin Ayata: No haven for refugeesErdogan and the Kurdish conflict: A battle for votes
Related Topics
'Islamic State' | IS, Abdullah Ocalan, Kurdish-Turkish Conflict, Kurds, PKK, Recep Tayyip Erdogan, Turkish opposition, U.S. policy in the Middle East
All Topics

The Kurds are under attack from two sides: from Turkey, and from Iran. The situation in their territories in northern Iraq is becoming increasingly desperate. Birgit Svensson ... END_OF_DOCUMENT_TOKEN_TO_BE_REPLACED

More than 300 children in rebel-held northwest Syria kicked off their own football World Cup on Saturday, with organisers hoping to shine a light on communities battered by 11 ... END_OF_DOCUMENT_TOKEN_TO_BE_REPLACED

Lamya Kaddor, MP for Germany’s Green Party, visited Qatar with a group of parliamentarians. In interview with Claudia Mende, she advocates a differentiated picture and urges that ... END_OF_DOCUMENT_TOKEN_TO_BE_REPLACED

Arabs in the German capital? For many, this means criminal clans. Yet the city is home to a vibrant intellectual scene. Exiles from Syria, Palestine and Egypt are gathering to ... END_OF_DOCUMENT_TOKEN_TO_BE_REPLACED

After a two-year hiatus, the Arab League re-convened at the beginning of November in Algiers against a backdrop of uncertainty and discord. By Pierre Boussel END_OF_DOCUMENT_TOKEN_TO_BE_REPLACED

In the run-up to the COP27 global climate summit, hosted by Egypt in November, it is worth noting that little rainfall, aggressive heatwaves and worsening drought make the Middle ... END_OF_DOCUMENT_TOKEN_TO_BE_REPLACED
Author:
Cengiz Çandar
Date:
Mail:
Send via mail

END_OF_DOCUMENT_TOKEN_TO_BE_REPLACED
Social media
and networks
Subscribe to our
newsletter