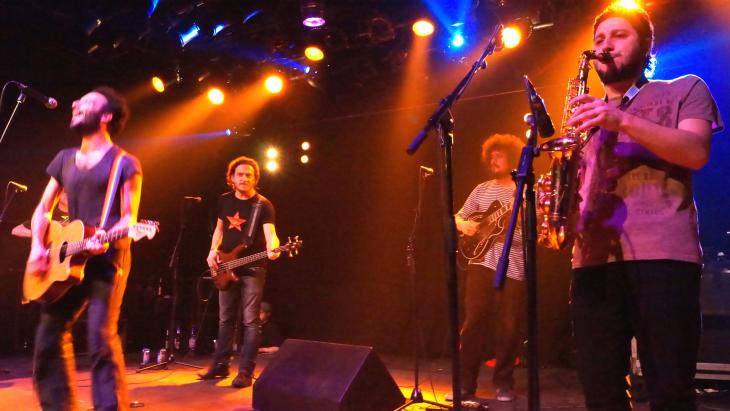 The music collective Bandista combines ska, dub and ethno sounds with a left-wing political message. With their catchy melodies and rhythms, they have become an essential part of street protests in Turkey. By Ceyda Nurtsch

Meeting up with Bandista before its concert in the Berlin club SO36 means making your way through a maze of catacombs. Gloomy stone-tiled corridors plastered with posters lead to the backstage area. You then have to traverse a breezy emergency staircase and pass through two soundproof doors. Finally, you find yourself in a room where the five band members are stretched out on sofas and chairs. In the middle of the room is a table with coffee, beer and water. "What would you like to drink?" they ask straightaway, as if they were conducting the interview.

Bandista is short for "Bando Istanbul." The musicians are members of a music collective established in 2006 that combines various musical styles with political and socially critical content. Although the band's musical roots are to be found in the cultural diversity of Anatolia, the members of Bandista stress the collective's internationalist stance. The band members maintain strict anonymity, and the band constantly changes its line-up. This evening, the band consists of five members. They have just finished their sound check and are killing time until they go on stage.

"We are against borders" 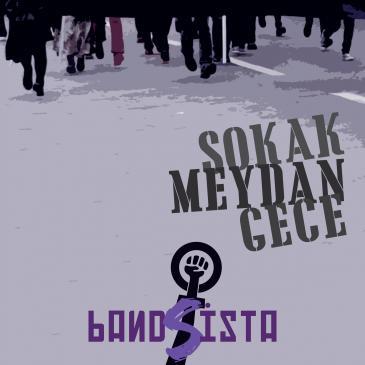 The sound of modern-day Turkish rebellion and political resistance: Bandista songs address a variety of issues such as police violence, the first guest workers in Germany and the downside to globalisation

Does the band see itself as a representative of a particular movement, I ask. "We don't believe in that kind of pigeonhole thinking," murmurs the curly haired guitarist sitting on the sofa in his baggy black-and-white striped pullover, his arms folded across his chest. The lively front man with a tribal tattoo on his upper arm explains: "At the very most, we stand for the street – the place where we find ourselves, and for our own point of view, from where we perceive this location. We have something to say and we say it. Our words target international companies, the armaments industry, capitalism, fascism and racism. We are against borders."

The members of Bandista are all children of the generation that grew up after the 1980 military coup. But, as they are keen to stress, their stance and their songs are infused with a sense of the past, the history of resistance and the victims. "We would like people to speak about the history that those in power would prefer us to forget" is a neat summary of their credo.

As the intro to the "Song of Defamation" begins in three-quarter time, the front man breathes his words into the microphone with an exaggerated rolled "r". "The history that we have to tell begins in 1915. With the genocide of the Armenians." The theme continues in the song. "All of this never happened. Even history was only a witness and even it wasn't ashamed."

Bandista has already released seven albums, which are all freely available for download on the Internet. Their songs address issues such as police violence, the first guest workers in Germany, criticism of globalisation, gentrification (as manifested in the current construction boom in Istanbul) and the 1980 military coup. One of their best-known songs is "My Mother is a Saturday." It refers to the mothers of the young men who were made to "disappear" by the state and who week after week, conduct a silent protest for information and accountability.

Against commercialism and the music industry

Bandista, however, does not want to be seen as just another stone in the mosaic that makes up Turkish protest music. "We live in a place where both the history of the massacre as well as protests against it exist. Although we are walking this path, we are also punks. We are familiar with MTV and know how the music industry works. We try to make music outside of that system," explains the muscular bassist with the dark-blonde ponytail and the wide smile, as he rolls a cigarette. When the musicians voice criticism in their original songs, they don't sound uptight or preachy; they always play catchy melodies that invite audiences to dance and sing along.

It goes without saying that Bandista performed on Taksim Square during last summer's Gezi protests in Istanbul. "We had already seen in other countries that such a mass movement is possible. But this was the first time that something like this took place in Turkey," explains the saxophonist, who, if appearances are anything to go by, seems to be the youngest member of the collective. "Those who otherwise remain silent have seen what happens when they raise their voices."

The 18 days of occupation, during which Istanbul's Gezi Park was filled with protesters, tents and food stands, was a time when people lived in perfect solidarity. For these people, Gezi is not just an isolated, one-off phenomenon that is over and done with. As far as the musicians are concerned, Gezi lives on. Turkish society was given a wake-up call, awareness was raised, something that is evident in the on-going protests, such as the actions by the resistance movement in the Istanbul district of Karakoey and the protests in front of the gates of the Justice Ministry.

"Every resistance movement has its own voice. The pots and pans that people beat out on the street provided the music for this protest," interjects the bassist on the sofa. His band-mate, the accordionist, concurs. "We recently visited workers from the Kazova textile factory. After the old factory was closed and the workers were let go without any compensation, they resisted and occupied the factory. They kept production going and today, they sell pullovers that they make themselves. The noise of the sewing machines and the clatter of the needles was their music, their notes," he explains. During the Gezi protests, music, as well as graffiti art, dance and every other form of artistic expression were all means to share a common joy as well as the common sense of grief.

At the solidarity concert in Berlin for those Gezi protesters who are still behind bars, the Bandista musicians create a lively atmosphere. The audience is international. "I like how they combine left-wing classics like 'A las barricadas' with traditional sounds," enthuses one member of the audience, who has been following the band for ages. Bandista regularly performs at various festivals, and their fan base has grown accordingly.

This evening, Bandista closes the concert with a Turkish version of "Bella Ciao", which is obligatory for any event featuring left-wing internationalist protest music, and the words "the resistance continues." The audience happily sings along.

Millions in Idlib depend on aid coming through a northern border crossing. On 10 July, the UN Security Council votes whether to keep it open. The decision may hinge not only on ... END_OF_DOCUMENT_TOKEN_TO_BE_REPLACED

Bachtyar Ali sends the hero of his latest novel – "Mein Onkel den der Wind mitnahm" – literally flying. Jamshid is so thin after his years as a political prisoner that a gust of ... END_OF_DOCUMENT_TOKEN_TO_BE_REPLACED

For a century, the Kurds and other minorities in Turkey have been subject to state repression. With his dissertation "The Kurdish Question in Turkey", political analyst Ismail ... END_OF_DOCUMENT_TOKEN_TO_BE_REPLACED

Despite what heads of state may claim, the Russian attack on Ukraine is not a wake-up call for a self-confident Europe that defends its values. The war is accelerating the decline ... END_OF_DOCUMENT_TOKEN_TO_BE_REPLACED

At the EU's outer borders, the right of migrants to a fair asylum procedure continues to be systematically disregarded. Take Greece, for example: in the worst case scenario, those ... END_OF_DOCUMENT_TOKEN_TO_BE_REPLACED
Author:
Ceyda Nurtsch
Date:
Mail:
Send via mail

END_OF_DOCUMENT_TOKEN_TO_BE_REPLACED
Social media
and networks
Subscribe to our
newsletter