From Saudi Arabia to Morocco: Every evening the Turkish series "Noor" draws millions of people to their television sets. The show is about love, intimacy and equality; no social taboo is ignored. Alfred Hackensberger reports

From Saudi Arabia to Morocco: Every evening the Turkish series "Noor" draws millions of people to their television sets. The show is about love, intimacy and equality; no social taboo is ignored. Some see in "Noor" proof of social change, others only fiction. Alfred Hackensberger reports

​​Kivan Tatlitug is tall, blue-eyed, and extremely good-looking. For four months now the 24-year-old Turkish actor has been bewitching female TV viewers from Saudi Arabia to Morocco as Mohannad in the TV series "Noor".

It is an enthusiasm that has allegedly prompted a few husbands in the Gulf states to file for divorce. They found Mohannad photos on their wives' cell phones. In Saudi Arabia a large-scale farmer sold her herds of sheep so she could spend her evenings in front of the television, undisturbed.

The enthusiasm, however, is not first and foremost about the attractiveness of the Turkish ex-model. Kivan Tatlitug plays Mohannad, a man who treats his wife as an equal, who supports her in her professional career as a fashion designer, and is loving and understanding. He brings her flowers after a quarrel, surprises her with presents and a romantic vacation.

Against God and His prophets

This is male behavior that women here only know from Western film productions and that does not occur in Arab TV productions. For many female viewers gentle Mohannad is a male ideal.

"Our society", explains the Vice President of Bahrain's Women's Union, Fatima Rabea, "is not accustomed to such intimacy and love. We are so busy with our everyday lives that a loving relationship takes a back seat. The TV series 'Noor' has now awakened the desire for this."

"Satanic and immoral," is how the Grand Mufti of Saudi Arabia described the Turkish television series "Noor" while demanding that TV stations immediately cancel this "attack on God and his prophets".

In the Palestinian city of Nablus a member of the parliament and preacher from the radical Islamist party Hamas warned against the series, which violates "religion, values, and tradition".

The criticism from both conservative dignitaries is not directed solely at the liberal TV role model of man and woman. The Turkish soap opera has broken other social taboos in conservative Muslim societies, which has also contributed to the success of the series.

Between three and four million Saudis follow the life and love of Noor and her husband Mohannad every evening. Streets in the Palestinian Gaza Strip and the West Bank are empty when the show is being aired.

And if the power goes out, people set their alarms so they won't miss the rerun early in the morning. Even in other Arab countries such as Syria, Bahrain, and Morocco large families gather in front of their TV sets every evening to watch their heroes.

The TV series depicts a panorama of reality in Arab societies that cannot be seen anywhere else. Before marrying Noor Mohannad had premarital sex and fathered a child; a cousin has an abortion; and alcohol is consumed at dinner.

"We all do things in our lives that are shown in the series," says Syrian actress Laura Abu Sa'ad, who lends her Arab voice to the female leading character "Noor".

"Many girls, for instance, get pregnant and have abortions, but nobody talks about it. It is a relief to see on TV what is typically swept under the rug."

For Laura Abu Sa'ad the success of the series is a sign that "Arab Muslims want to follow a moderate Islam and not the extremists." 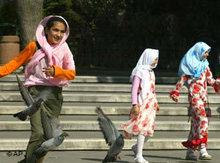 Other than in Turkish every day life religion is not a main subject in "Noor". The female characters are acting unveiled

​​Religion plays a subordinate role in the series. The marriage between Noor and Mohannad was arranged by grandfather, and they fast during the month of Ramadan. But none of the leading characters are shown at the five daily prayers, nor do the women wear religious headscarves.

"I think this series portrays a very unrealistic image of Turkey," criticizes Professor Khalid Amine of the Moroccan University in Tetouan. "As if the Islamist Party were not in the government and there were no conflicts between religion and secularism. The production conveys an idealization that is good only for tourism."

"My family from Belgium," continues the university professor, "is not returning home to Morocco for the summer holidays, but is traveling to Turkey."

The children want to see the setting of "The Lost Years", another popular Turkish series for youth, the parents want to see the country of Noor and Mohannad. In Istanbul the Turkish production company of "Noor" has turned the villa, the fictional home of Mohannad, into a museum for Arab tourists. From Saudi Arabia alone 100,000 visitors are expected, 70,000 more than last year.

A make-do becomes a hit

The cult status of the series came as a total surprise for the pan-Arab satellite station MBC. In Turkey the series "Noor", launched in 2005, was not a commercial success. According to MBC President, Sheik Walid al-Ibrahim, MBC was scouting abroad for inexpensive products because Arab TV series are outrageously expensive.

The Turkish make-do, synchronized not with classic Arab but with the spoken dialect of the region, has become the biggest hit for the station with its headquarters in Dubai. More Turkish series is scheduled to follow.

"A Jihad for Love" – a documentary by Parvez Sharma
Islam's Most Unlikely Storytellers
Parvez Sharma spent six years traveling throughout the Muslim world, Europe and North America documenting the lives of gay and lesbian Muslims – many of them devout – who struggle to reconcile their faith with their sexuality. Marianna Evenstein caught up with the Indian filmmaker

WOMNET Conference of Women Networks
Partial Successes for the Women's Rights Movement in Morocco
Goals towards achieving greater gender equality are far from being fully realized in EU countries and in predominantly Muslim states bordering on the Mediterranean. So concluded a conference of women's rights groups. Yet, there were also positive developments noted. One of these is the new Family Law in Morocco, as Monika Hoegen reports

END_OF_DOCUMENT_TOKEN_TO_BE_REPLACED
Social media
and networks
Subscribe to our
newsletter