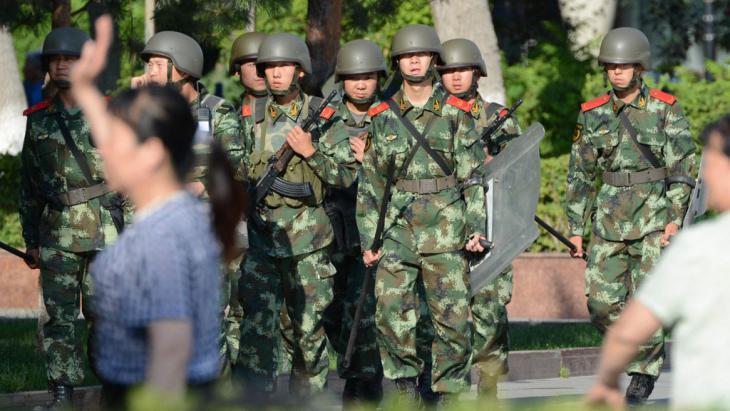 An escalation of violence in Xinjiang

The number of reports of murders, attacks and unrest from the Chinese province of Xinjiang has been on the rise for months. The province's Uighur population has long complained about being disadvantaged in religious, cultural and social terms. The authorities claim unspecified "terrorists" are responsible for the violence, but the public almost always remains in the dark about the true background to the attacks. By Ulrich von Schwerin.

The list of violent incidents in Xinjiang this year is long, and getting longer all the time: 22 dead in an attack on a Han farmers' market on 12 October; 50 dead in attacks on police stations on 21 September; 96 dead in attacks on government buildings on 28 July; 31 dead in a suicide attack on a market on 22 May; 33 dead in a knife attack in Kunming train station on 1 March. In all cases, the Chinese authorities spoke of "acts of terror". The Uighurs are always the culprits, and the Han Chinese generally the victims - but you will learn little more than this from the state media.

Unrest and isolated attacks are nothing new in Xinjiang, a sparsely-populated desert province in the far west of China, which has traditionally been inhabited by Uighurs, Kyrgyz, Tajiks and other ethnic Muslim groups. But since the severe unrest of 2009, an escalation of the violence has been observed in the oasis towns on the edge of the Taklamakan desert. As well as the larger-scale attacks, police officers, civil servants and Han farmers are being murdered almost every week. At the same time, repression is increasing, and young Uighurs are regularly given death sentences and executed.

The authorities attribute the violence to "terrorists". According to the picture they present of the situation, the East Turkestan Islamic Movement (Etim) is largely behind the attacks. Etim is an Islamist group that was added to the UN terror list in 2002, at China's urging and with support from the US. But there is hardly any concrete evidence for the involvement of the group. 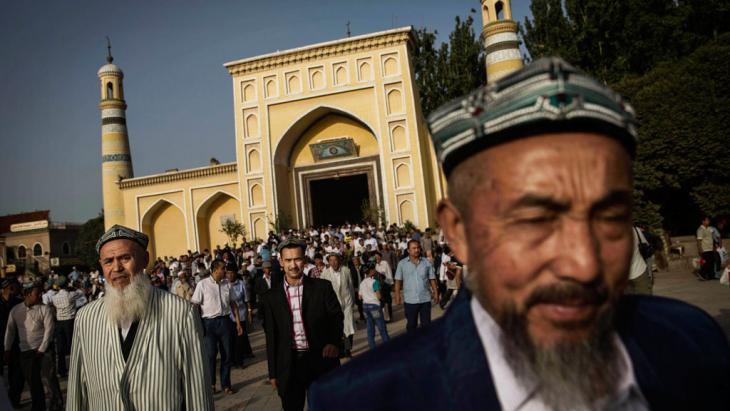 Marginalised: The Turkic language-speaking Muslim minority Uighurs traditionally formed the majority in the sparsely populated desert province in the far west of China. But since the systematic immigration of Han Chinese, the Uighurs feel socially, culturally and economically disadvantaged

"Nobody knows what role Etim is really playing, and whether it even still exists as a classic organisation. But it is practical for China, since it means they can hold Etim responsible for all the attacks and criminalise the Uighur opposition," says Daniel Krahl. The expert on Islam in China at the German Institute for International and Security Affairs (SWP) in Berlin attributes the increasing violence less to religious extremism than to the Uighurs‘ dissatisfaction at being ostracised, and the systematic settlement of Han Chinese.

The proportion of the latter in Xinjiang has grown from five to 40 per cent since 1949. After the Uighurs, they are the largest ethnic group, and in many towns they already constitute a majority population. "Immigration has reached a level that means all Uighurs are now affected. Today, whole towns are Chinese," says Krahl.

The situation in cities like Kashgar, which were once Uighur, shows how this ethnic group is being socially and culturally marginalised in their own homeland. Large parts of the old town have been torn down, and the inhabitants moved out to new tower blocks on the edge of the city; the remaining bazaars around the Friday mosque have been turned into a kind of open-air museum.

"Cities have been destroyed elsewhere in China, too," says Krahl. "But in Xinjiang it's particularly incendiary: it's interpreted as an attack on Uighur culture. It gives the Uighurs the feeling that they're in a situation they can't escape from, which leads to desperate acts." 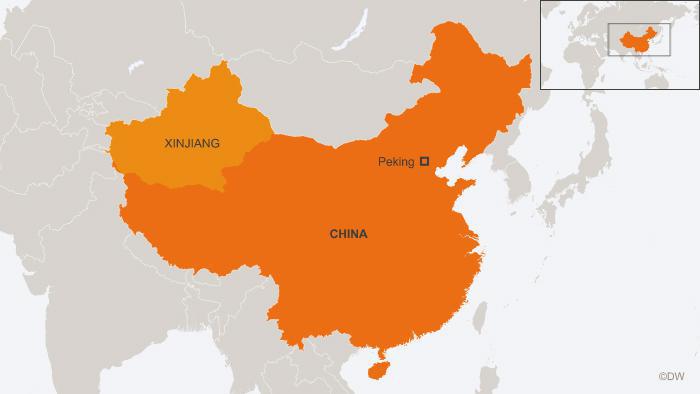 Xinjiang is viewed as a flashpoint region in view of tensions between the Muslim Uighur minority and the dominant Han Chinese. There's been a sharp increase in the number of fatal clashes between Uighurs and police, as well as a series of terrorist attacks. The Turkic people complain of repression, while Beijing adopts a hardline approach accusing the Uighurs of separatism and terrorism

The government in Beijing points to the fact that, in Xinjiang as in Tibet, they are doing a great deal to build infrastructure and develop the economy. There is no denying this, but it is also clear that the Han Chinese are benefitting more from this development than the Uighurs. According to Krahl, the Uighurs believe they have always faced strong resentment from the Han, who view them as unreliable and criminal. They face discrimination in the cities of Eastern China as well, where, with the exception of a few cadres, they live on the margins of society. In Xinjiang they are also subject to stricter controls and clear limitations on practising their language, culture and religion.

Human Rights Watch (HRW) has documented in detail how the religious freedom of the Uighurs has been gradually curtailed since the late 1990s - and especially following the attacks of 11 September 2001, when the authorities tightened their controls, as the human rights organisation noted in a 2012 report. The battle against religious extremism in Xinjiang has since been presented as a part of the international battle against terrorism. Islamism and separatism are essentially being set on a par with terrorism.

Although the Uighurs follow a traditional, syncretic ethnic Islam, they are subject to stricter regulations than other Muslims in China, according to the HRW report. These stipulate that minors are forbidden from entering mosques in Xinjiang, and private Koran courses are banned. Religion is not to be spoken about in schools, and there are strict sanctions against praying, fasting or wearing a headscarf. Islamic texts cannot be imported from outside the country, and Uighurs are forbidden from travelling abroad to study religion.

These sorts of restrictions on basic rights repeatedly provoke vehement protests, which tip over into violence when they are met with a harsh response from the police. According to research by the US broadcaster Radio Free Asia (RFA), riots in late July in Yarkand County that left 96 dead - the bloodiest incident since the severe unrest of 2009 - began with protests against strict controls during the fasting month of Ramadan. RFA says the specific catalyst was the shooting of a family of five by the police, following an argument about a headscarf.

According to official information, 35 Han and two Uighurs were killed in the riots at the end of Ramadan. The other 59 victims were supposedly "terrorists". And in the unrest on 21 September, when several police stations were attacked with explosives in the villages of Bugur, Yengisar und Terekbazar, the state media claimed that 40 of the 50 victims were "terrorists". RFA, which questioned eyewitnesses by phone, says that in this case the catalyst was dissatisfaction over the forced resettlements, and all victims were killed by the police.

No foreseeable end to the violence

In this and other cases, it is hardly possible to conduct independent research on the ground. We therefore remain in the dark on the precise causes of these events, how they unfolded, and the numbers of victims. In the view of China expert Daniel Krahl, however, the form of the attacks suggests that there is no organised group behind them. The level of planning is obviously low, and cleavers or other simple weapons like axes are generally used, says Krahl. Even in the attacks in Urumqi at the end of May, the explosives used were rather primitive. 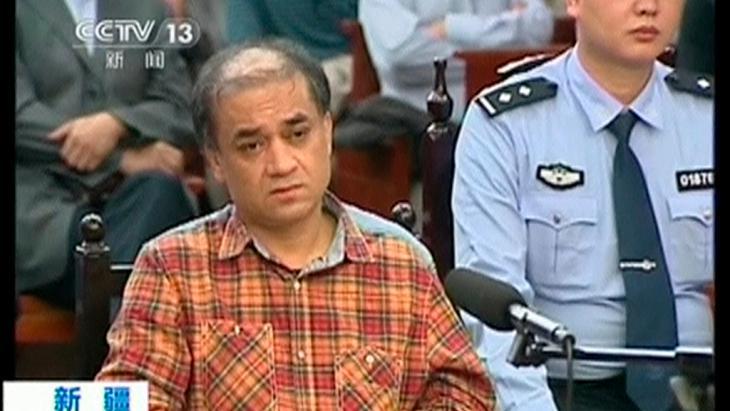 Life sentence for Uighur civil rights activist: Human rights organisations have protested against the sentencing of economics professor and blogger Ilham Tohti, who launched a website Uighurbiz.net in 2005 to campaign for dialogue between the Muslim minority and Han Chinese. His conviction for "separatism" late September was met with international condemnation, as Tohti is viewed as a broadly moderate voice in the discourse. The fate of the Uighur academic was also sharply criticised by the German government.

The political scientist does not expect an end to the violence. "The state will not give in, repression will increase, and the Uighurs will become ever more desperate, and more ready to engage in violence," says Krahl.

And in fact Beijing is making no move to approach the Uighurs. Instead, the recent trial against Uighur civil rights campaigner and professor Ilham Tohti, who ran an Uighur web forum together with some students, shows that the authorities are now refusing to tolerate even moderate critics. On 23 September, Tohti was sentenced to life imprisonment for separatism.

Commenting on the trial, the Director of HRW China, Sophie Robinson said the solution to the conflict is not more repression, but more understanding for the justified complaints of the Uighurs. If even Tohti, who has always acted peacefully to promote dialogue between the conflict parties and spoke out against the independence of Xinjiang, has been branded a separatist, the prospects for a resolution to ethnic tensions in Xinjiang look ever more bleak.

Imprisoned Uighur human rights activist Ilham Tohti has been awarded the Sakharov prize 2019 for human rights by the EU Parliament. His daughter Jewher Ilham, who lives in the U.S ... END_OF_DOCUMENT_TOKEN_TO_BE_REPLACED

Abu Dhabi and Riyadh see a natural partnership with Modi’s government, a co-operation that could change the dynamics of the South Asian-Gulf nexus. By Jean-Loup Samaan END_OF_DOCUMENT_TOKEN_TO_BE_REPLACED

India's decision to deprive Kashmir of its autonomy, alongside a clampdown in the troubled north-western Chinese province of Xinjiang and US-backed Israeli annexation of Arab land ... END_OF_DOCUMENT_TOKEN_TO_BE_REPLACED

In the absence of international censure, China has stepped up its systematic persecution of Muslims, under the dubious pretence that it is fighting "terrorism" and protecting its ... END_OF_DOCUMENT_TOKEN_TO_BE_REPLACED 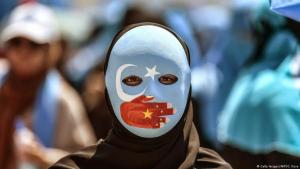 Following a long silence, the Turkish government yielded to pressure from its nationalist voter base in February – arguably in a bid to garner local election votes – and ... END_OF_DOCUMENT_TOKEN_TO_BE_REPLACED 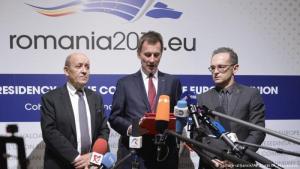 In an attempt to salvage the Iran nuclear deal, Germany, France and Britain recently set up a new vehicle of non-dollar trade with the Islamic Republic. The policy is ... END_OF_DOCUMENT_TOKEN_TO_BE_REPLACED
Author:
Ulrich von Schwerin
Date:
Mail:
Send via mail