It is no surprise, then, that the mood among the population is still very tense today. A former student of politics at the University of Sulaymaniyah, who now ekes out a living as a taxi driver, is as pessimistic about the tense economic and political situation in the Kurdistan region as you might expect. And about the influence that neighbouring countries are having in the region: "The things that Turkey and Iran want are being realised here," he complains. "They will pursue us all the way into the afterlife, that is our fate as Kurds."

In the hands of the clans

Many Kurds feel frustrated that all the decisions are being made by those political forces that control the militias, the weapons, the media and the economy. Political parties do exist in the region, itʹs true, and they are all big on promises, but in practice many people have the impression that Iraqi Kurdistan is still essentially ruled by a few clans that form the real core of each of the parties. 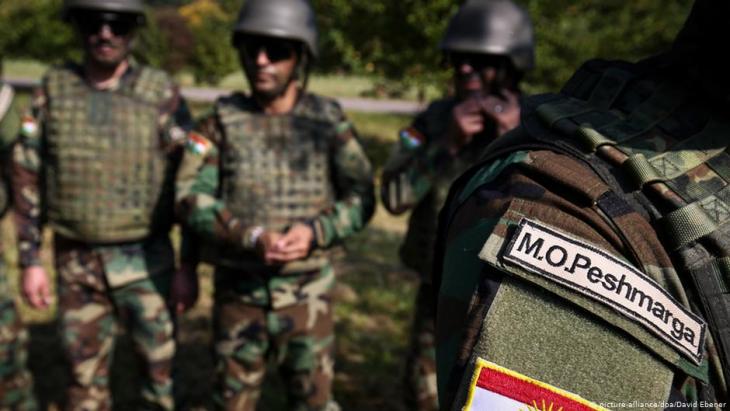 Closing ranks against the jihadists of "Islamic State": the Kurds in northern Iraq enjoy extensive autonomy rights, but continue to strive for independence. They have also been supported by the Bundeswehr in their fight against IS. Germany supplied weapons to the Kurdish Peshmerga fighters and trained them. The PDK and the Barzani family have long been among the dominant forces in the Kurdish Iraqi territories

The economic channels are controlled by the two main parties, the "Kurdistan Democratic Party" (PDK), which alone holds 45 of the 111 parliamentary seats, and the "Patriotic Union of Kurdistan" (PUK), with its 21 seats. In view of their dominance of the political landscape, the people have little hope of fundamental political change in northern Iraq.

The graduate taxi-driver has three children; the rent on his flat is around 250 Euros, and his wife, who works as a primary school teacher, has not received her full salary for several years. For him, work is a daily struggle for financial survival. He has to raise the missing money to support himself and his family. And as a result he – like many other Kurds in northern Iraq – believes that the officials and parties are corrupt and take "the biggest piece of the pie" for themselves. He has just as little faith in the independence of the justice system.

Another example of the enduring misery in the region is provided by a teacher from Sulaymaniyah, who finished university in 2009 and had to wait until 2014 to get a job. He is still unmarried and lives with his parents: so far, he doesnʹt see any opportunity to build a future for himself. His original income of around 500 euros has been reduced to 280 through the state-ordered saving system, and is not paid out regularly, either. Sometimes his salary arrives several months late. It often happens that people who work for certain ministries are paid first, and other ministries only follow later.

Historically Iraq's Yazidi community was isolated, under-resourced and very conservative. Seven years after the "Islamic State" tragedy, the community is more open to the world – ... END_OF_DOCUMENT_TOKEN_TO_BE_REPLACED

Asef Bayat, professor of Sociology at the University of Illinois, Urbana-Champaign, has been studying revolutions and how they affect people since 1979. In his recent book, " ... END_OF_DOCUMENT_TOKEN_TO_BE_REPLACED

Young people in northern Iraq are so disillusioned that many are trying to leave the country any way they can. Some fear widespread discontent could push people toward potentially ... END_OF_DOCUMENT_TOKEN_TO_BE_REPLACED

In this new bilingual edition, translated by Humphrey Davies, al-Jawbari, one of the thirteenth century's leading experts in skullduggery reveals all there is to know about the ... END_OF_DOCUMENT_TOKEN_TO_BE_REPLACED

In Iraq, returning families of IS fighters have to turn to local initiatives for help, as there is no official path home. Judit Neurink met with families on the ground END_OF_DOCUMENT_TOKEN_TO_BE_REPLACED
Author:
Dara Alani
Date:
Mail:
Send via mail

END_OF_DOCUMENT_TOKEN_TO_BE_REPLACED
Social media
and networks
Subscribe to our
newsletter