Another consequence of the austerity measures is the worsening state of the regionʹs infrastructure. Paths and streets are disintegrating. After an unusually wet year, there are now clear signs that no money has been available for, or has been spent on, road repairs, and the number of accidents is rising steadily. 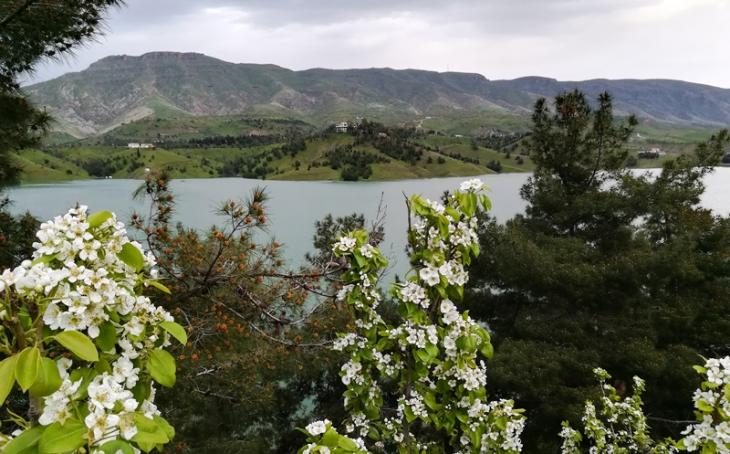 A rich land with economic potential: in many respects, the fertile mountain slopes of Kurdistan offer opportunities for an economic awakening, as was evident in the years preceding 2014 when the autonomous region was beginning to get on its feet. This process has now come to a standstill, however. At the moment, the region lacks the long-term strategic planning and investment that would allow it to make really intensive use of its potential in agriculture and tourism

Every piece of news regarding upcoming government reshuffles and the opening or closing of airports or borders has an immediate effect on prices. Often, even rumours among the population are enough to trigger extreme swings in property prices, and the cost of everyday grocery items, over a few weeks or months.

No prospects for the younger generation

In these times of economic and political uncertainty, the younger generation in particular can see no prospects for their future in the region. Austerity has hit the school system and the universities just as hard as other sectors. And those graduating donʹt dazzle with their practical skills, expertise, innovation and new ideas. Most just hope to get a job in the state sector quickly after graduating, and all too often complain that these positions are usually reserved for people who are well-connected.

More than a few school and college leavers therefore see a career with the Peshmerga or jihadists as their only realistic option. Anyone who manages to scrape together enough money leaves their homeland and tries to emigrate to Europe.

However, there are real economic prospects for the region of Iraqi Kurdistan, for example in the tourism and agricultural sectors. Its fertile mountains in particular have great potential, as can be seen from the years before 2014 when Iraqi Kurdistan was beginning to get on its feet. This process has now come to a standstill, however: at the moment, the region lacks the long-term strategic planning and investment that would allow it to make really intensive use of its potential in agriculture and tourism.

Historically Iraq's Yazidi community was isolated, under-resourced and very conservative. Seven years after the "Islamic State" tragedy, the community is more open to the world – ... END_OF_DOCUMENT_TOKEN_TO_BE_REPLACED

Asef Bayat, professor of Sociology at the University of Illinois, Urbana-Champaign, has been studying revolutions and how they affect people since 1979. In his recent book, " ... END_OF_DOCUMENT_TOKEN_TO_BE_REPLACED

Young people in northern Iraq are so disillusioned that many are trying to leave the country any way they can. Some fear widespread discontent could push people toward potentially ... END_OF_DOCUMENT_TOKEN_TO_BE_REPLACED

In this new bilingual edition, translated by Humphrey Davies, al-Jawbari, one of the thirteenth century's leading experts in skullduggery reveals all there is to know about the ... END_OF_DOCUMENT_TOKEN_TO_BE_REPLACED

In Iraq, returning families of IS fighters have to turn to local initiatives for help, as there is no official path home. Judit Neurink met with families on the ground END_OF_DOCUMENT_TOKEN_TO_BE_REPLACED
Author:
Dara Alani
Date:
Mail:
Send via mail

END_OF_DOCUMENT_TOKEN_TO_BE_REPLACED
Social media
and networks
Subscribe to our
newsletter