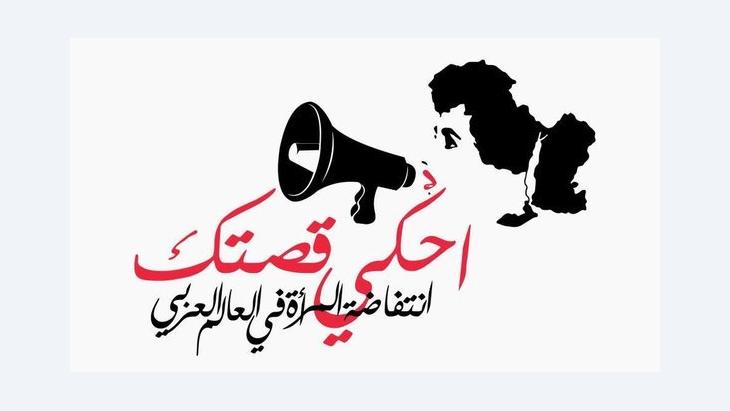 The Uprising of Women in the Arab World
Fighting Patriarchal Tyranny

The group "The uprising of women in the Arab world" is taking a courageous stand for gender equality. However, the activists face significant resistance: from old ways of thinking, patriarchal chauvinism – and even from Facebook. Laura Overmeyer reports

The women of the Arab world felt great hope when the uprisings against the dictatorial regimes began in the spring of 2011. Side by side with men, they demonstrated for dignity, justice and freedom. Their hope was for change: an escape from a patriarchal social system hostile to women, which denies them basic rights and discriminates against them in both public and private life. Women's rights are a fundamental part of democracy and thus, they assumed, radical change was bound to extend to the social arena. 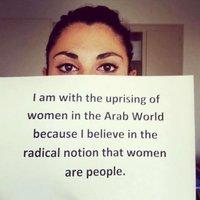 The majority of respondents were women from the Arab world, but a great deal of support came from further afield: This photo was handed in by Paola from Lebanon

​​Now, two years after the revolutions, that euphoria has given way to disillusionment; the situation has by no means improved for women. Islamic forces are riding a wave of success, washing in a tide of conservative ideas, particularly on gender issues. Women are being reduced to their bodies more than ever before, with sexual assaults on the increase. In almost all Arab countries, legislation that puts women at a disadvantage is still in place, especially civil laws.

Women's rights put on a back burner

A return to the previous status quo, in other words. And it seems that women's rights in general are being put on a back burner, with the concerns of one section of society valued clearly below those of the nation as a whole.

Many women, however, do not want to let the chance for change pass them by, among them four young activists from Lebanon, Palestine and Egypt. They decided to use the same means that brought success for the Arab Spring to launch their own uprising. In October 2011 they set up the Facebook page "The uprising of women in the Arab world".

"We want the Arab Spring to continue. After political tyranny, we're now fighting patriarchal tyranny – in all the Arab countries," Yalda Younes, one of the initiators, told a major German newspaper.

The site is intended for all Arab women from Rabat to Riadh, regardless of their religion and background, offering a space in which they can discuss their experiences of discrimination and women's rights in general and in the Arab world in particular, freely and without fear.

The idea is to shift the discourse on women's rights in the Arab world back to the public eye and at the same time strengthen women through dialogue and form a common basis for feminist activism across national borders. While women's circumstances differ between Morocco and Saudi Arabia, they do face similar problems, all of which are rooted in the same system of patriarchal ideas.

The Arab Spring as a Training Ground: The idea of the campaign is to shift the discourse on women's rights in the Arab world back to the public eye and at the same time form a common basis for feminist activism across national borders

​​The movement's demands were clear-cut from the very outset. Firstly, the extension of all freedoms contained in the Universal Declaration of Human Rights to all women, in particular the right to self-determination. Secondly, absolute equality with men, on the family, political, social and economic level, and thirdly an end to every form of discrimination and all physical and mental abuse.

Initially the site was largely ignored by the media. That changed, however, when the initiators launched the campaign "I am with the uprising of women in the Arab world because…" in October 2012. They asked men and women from around the world to submit a self-portrait with a personal statement of their reasons for supporting the movement. The pictures were published on Facebook and Twitter.

There followed a veritable deluge of photos: people held their printed or handwritten messages up to the camera, lending a face to the Arab women's uprising.

The majority of respondents were women from the Arab world, but a great deal of support came from further afield – and to the initiator's amazement, many men sent in their photos and spoke up for the rights of their partners, mothers, sisters and female friends. Well over a thousand self-portraits have been submitted so far, many of them commented upon and shared hundreds of times, soon circulating around the whole of the web. The young women's plan worked out; the Arab Spring had been a good training ground. 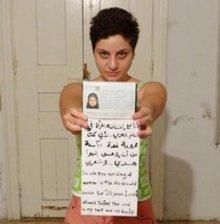 Provocative and confident: "I am with the uprising of women in the Arab world because for twenty years I was not allowed to feel wind in my hair and on my body." Facebook deleted the portrait of the young Syrian woman Dana Bakdounis

​​Unsurprisingly, the overwhelmingly positive reactions were accompanied by criticism, mainly from conservative religious elements. Some Facebook users reacted aggressively to the pictures. "If she was my sister I'd fire a dozen rifle cartridges at her," one man from Yemen commented on a photo, providing an acute example of the values system these courageous women are up against.

And Facebook itself put hurdles in the campaign's way, blocking the five administrators' access to the site and deleting a portrait of the young Syrian woman Dana Bakdounis, who had photographed herself without a headscarf and with her hair cut demonstratively short: "I am with the uprising of women in the Arab world because for twenty years I was not allowed to feel wind in my hair and on my body." To this day, Facebook has failed to explain why it took these actions.

On 25 November 2012, coinciding with the International Day for the Elimination of Violence against Women, a two-week campaign was launched under the name of "Tell your story". Women were asked to tell their hidden stories – the tales that are otherwise forgotten and obscured out of shame or fear of social condemnation. Stories of violence and sexual abuse, of tyranny, humiliation and harassment.

Even taboo subjects such as female genital mutilation and child marriage were not to be ignored. "The finger of blame should be pointing at the perpetrator and not the victim," as the campaign statement put it. "Let us speak out to liberate ourselves and force the world to listen to us."

The outcome: more than sixty intimate and personal stories, some of which have been burdening the girls and women who told them for decades. These public revelations prove the young women's courage – yet will that openness alone suffice to achieve real change? Although these issues have been hushed up for years, they are in fact no secret. 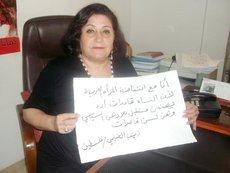 "I support the uprising of women in the Arab world because women can change the political future of their country – and they are not worth less than men." – Zeinab El-Ghonaimy, Palestine

​​The Arab women activists know they have a long, hard road ahead of them. It is a battle against windmills, but one they are determined to fight; they are attempting an assault on an ancient, traditional values system that is deeply rooted in society.

To achieve real results, the issue must be raised to a political level, and to do so the uprising of the Arab women must leave the virtual world and take to the streets. That is where the Arab Spring took place after all, where it came of age. The women must make use of their mobilisation potential and institutionalise it, for instance by founding parties and associations.

"The uprising of women in the Arab world" may well be still in its infancy. Yet the movement has already come closer to its aim of raising public attention – and it can only be a good thing if the political powers in the Arab countries come to realise that women's rights can no longer be swept under the carpet.

Home
Print
Newsletter
More on this topic
Women during the ''Arabellion'': Neither Winners nor LosersWomen's Rights and the Arab Spring: The Female Face of the RevolutionMansoura Ez Eldin on Women's Rights in Egypt: Between Hammer and Anvil
Related Topics
Arab Spring, Arabellion, Democracy and civil society, Gender, Media in the Arab World, Muslim women, Sexism and violence against women, Women in the Islamic world
All Topics

The devaluation of the Egyptian pound combined with rising food prices is taking its toll on Egypt. More and more people are slipping into poverty. Karim El-Gawhary reports from ... END_OF_DOCUMENT_TOKEN_TO_BE_REPLACED

Egyptian Sufis have been on the defensive against the country's Islamists for decades. Meanwhile, interest in mysticism is growing among the young members of Cairo’s middle and ... END_OF_DOCUMENT_TOKEN_TO_BE_REPLACED

Abortions are illegal in Egypt unless they are necessary to save a married woman's life. But that doesn't stop local women from having one. Egyptian society needs to acknowledge ... END_OF_DOCUMENT_TOKEN_TO_BE_REPLACED

Food prices doubled, salaries halved, banks restricting withdrawals: Egyptians now have the same problems as the Lebanese. But if things get worse here, the fallout will be far ... END_OF_DOCUMENT_TOKEN_TO_BE_REPLACED

Giessen, Eichsfeld, Kusel, Berlin – cars bearing old German number plates are the latest trend on the streets of Cairo. Many Egyptians regard the discarded plates as chic. What ... END_OF_DOCUMENT_TOKEN_TO_BE_REPLACED

END_OF_DOCUMENT_TOKEN_TO_BE_REPLACED
Social media
and networks
Subscribe to our
newsletter