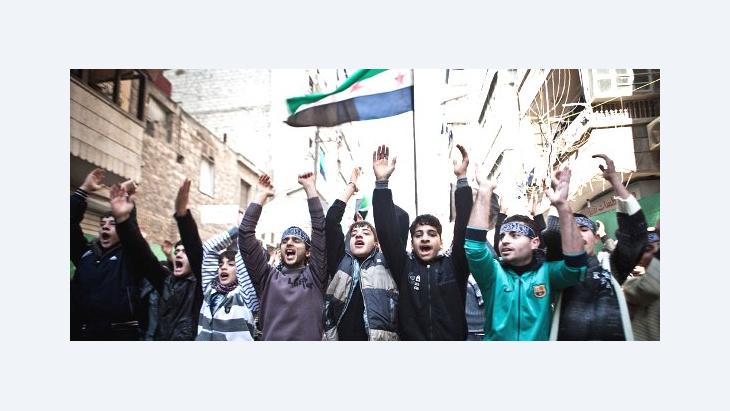 The War in Syria

China, the West, and the Russians share responsibility for the suffering

Whether through active or passive participation, the international community shares responsibility for the civil war taking place in Syria, writes Salam Kawakibi of the Arab Reform Initiative from Aleppo

The relationship of the Syrian leadership to the country's urban centres has always been an issue fraught with conflict. The massive bombardment of large cities, most recently of Aleppo, makes this clear in the most brutal manner. Aleppo's historical city districts, recognized as world cultural heritage sites, have been preferred targets for regime attacks.

The depravity of the system, frequently expressed in its contempt for the country's common cultural heritage, was one of the reasons for the outbreak of the Syrian revolution. The destruction of one of the oldest bazaars in the world is only a particularly extreme manifestation of this state of affairs. The fight for Aleppo represents the general situation in Syria. And it demonstrates the limited room for manoeuvre of both the regime and the opposition.

Syria faces an enormous challenge – a war against its civilians that is gradually transforming into an open civil war. The Assad regime has thereby created all the necessary preconditions. And the international community, through either active or passive participation, has contributed to the process. No one knows how things will now unfold in Syria.

Nonetheless, committed intellectuals, sensitized technocrats, and activists can set a sign of hope in these dark times. This has been demonstrated by projects such as The Day After, which develops scenarios for the post-Assad era and ideas for the transitional period. 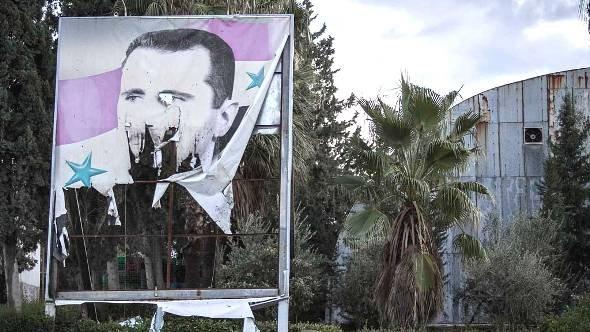 "The decisive question is not whether, but how Syrians will overcome the dictatorship", Salam Kawakibi asserts. Pictured: a damaged poster of Bashar al-Assad in Aleppo on 8 December 2012

​​In this time of transition, a functioning judicial system will be especially important. A so-called truth commission could contribute to coming to terms with past injustices, to securing some sense of justice under these degraded circumstances, and to prevent revisionist tendencies from gaining the upper hand.

The catastrophic humanitarian situation in Syria should provoke a sting of conscience in the international community. Declarations and good intentions do not feed the hungry nor do they offer sanctuary to refugees. The ominous repercussions of this situation are being felt not only within Syria, but in the neighbouring countries as well.

And what will happen after the conflict? Syria will have to struggle with the consequences of a massive economic crisis and the unforeseeable social effects in its wake. Relief could be provided by a Marshal Plan, which would have to be funded primarily by Syrians abroad and international sponsors.

The transition to democracy is a long-term process. After five decades without political experience and a culture of anxiety, active civic involvement by Syrian citizens cannot be expected to flourish over night. The decisive question is not whether, but how Syrians will overcome the dictatorship. This will play a significant role in determining the direction of developments in the coming years.

A chance to make amends

We face a plethora of tasks. In order to rebuild the destroyed social fabric, the newly emerging civil society must be supported. The Syrian economy, which has been controlled by the regime for decades and is plagued by corruption, has to be restructured from the ground up. This requires not only a functioning transitional judicial system, but also reform in a wide variety of areas. 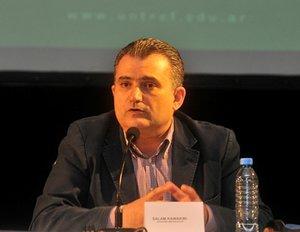 Salam Kawakibi is the Deputy Director of the Arab Reform Initiative and Honorary Professor at the University of Paris. He is active in the Syrian opposition

​​And prosperous countries, in particular, will have to get involved in this process. The reconstruction of a devastated Syria is probably their only chance to make amends for the indifference they have shown to the bloodbath currently going on in Syria.

One can speculate a great deal concerning the contributions by various states to the reconstruction of Syria. There are as yet no real prospects of help. Much more promising, on the other hand, is the commitment by international civil society, although it too remains frequently silent. Yet, I have not given up hope that it will awaken to its responsibilities and contribute to future developments in Syria.

From day one, Syrians have correctly understood that they have been abandoned and left to their own fate. This realization will help them overcome future hurdles. Syrians themselves will be able to take responsibility for their freedom and re-establish social cohesion. Once that is achieved, then almost anything is possible.

Salam Kawakibi is the Deputy Director of the Arab Reform Initiative and Honorary Professor at the University of Paris. He comes from a well-known family in Aleppo and is active in the Syrian opposition.

Looking outwards with the knowledge from within: a conversation with the Iraqi writer Sinan Antoon on the future of his homeland. Interview by Lena Bopp END_OF_DOCUMENT_TOKEN_TO_BE_REPLACED

Political analyst Taqadum al-Khatib argues that Egypt can, in co-ordination with its European partners, develop a common vision to solve the complex conflict in Libya. For this to ... END_OF_DOCUMENT_TOKEN_TO_BE_REPLACED

At the suggestion of his Arab students, Israeli psychologist Ofer Grosbard created the project "Quranet", which uses texts from the Koran to solve educational problems in schools ... END_OF_DOCUMENT_TOKEN_TO_BE_REPLACED

Libyans have mixed feelings about the EU. On the one hand, they admire what Europeans have achieved, but on the other, they feel let down. Moutaz and Walid Ali report from Tripoli END_OF_DOCUMENT_TOKEN_TO_BE_REPLACED

Turkey's President Erdogan wants to create a second Bosphorus. The cost to the economy and environment would be enormous – and that's why Istanbul's mayor is attempting to stop ... END_OF_DOCUMENT_TOKEN_TO_BE_REPLACED

Libya is in turmoil and no political solution is in sight. The EU's inability to take concerted action in the country, meanwhile, is being exploited by third parties, such as ... END_OF_DOCUMENT_TOKEN_TO_BE_REPLACED
Author:
Salam Kawakibi
Date:
Mail:
Send via mail