Daniel Barenboim is on tour with his Israeli-Arab orchestra in times of war. He regards it as an "independent republic" – and he has a message to pass on that is otherwise all but drowned out by the noise of the battlefield. By Sonja Zekri

​​ While the Divan Orchestra reaps its loudest applause, the situation in the Middle East is particularly bleak. The musicians have just bathed in standing ovations in Berlin and played to an almost sold-out hall in Moscow. In Gaza, 1000 people have died in three weeks.

An appalling link, but a logical consequence of the project as a whole – without the Middle East conflict, the orchestra would not exist. Ten years ago, Daniel Barenboim and the Arab literary scholar Edward Said set up a forum for young Jews, Christians and Muslims. The result was the West-Eastern Divan Orchestra, a model for an interplay of equals, a utopia for a different Middle East, naive and full of pathos but irresistible. Barenboim calls it "our independent republic".

The current European tour was originally intended to mark its anniversary. And then the offensive began. Cairo and Doha cancelled concerts "for security reasons", just like during the Lebanon War two and a half years ago.

The political situation almost spelled the end of the group back then – a number of musicians didn't even turn up for rehearsals, lamed by the shock. This time they're all here, brimming over with anger and doubts but also more considered, more attentive and more mature.

"The war affects me more deeply that I can say, but it also leads to fascinating discussions," says Daniel Cohen: "For the first time, it's not just Israelis arguing with Arabs, but also the Israelis among ourselves: what does it mean to be 'patriotic', what is 'Israeli'?"

Cohen, 24, is a violinist working on a career as a conductor. The ensemble has long since become an elite pool from which the orchestras of the world pick and choose up-and-coming musicians. The oboist Mor Biron plays for Simon Rattle. The Arab violinist Nabil Abbud Aschkar has set up a music school in Nazareth and discovered the Divan Orchestra's youngest musician, an eleven-year-old violinist.

Barenboim sharply criticised Israel for its attacks on Gaza. In his speech after conducting the Vienna Philharmonic's new year's concert he spoke out in favour of a peaceful solution in the Middle East

​​ The musicians are sitting in the concrete Moscow cube of the state news agency Itar-Tass, its marble stairs worn down by the feet of famous figures since the days when Soviet Moscow still delivered arms to the Middle East. On the wall is a picture of the United Nations, featuring Clinton and Castro and "Aah, Arafat!"

Ramsi Aburedwan recognises him at a distance of fifteen feet. Aburedwan, a slim young man wrapped in a thick striped scarf, was born in a refugee camp in Ramallah and came to fame as a teenager through a photo of him throwing stones at Israeli soldiers. Now he plays the viola and racks his brains over a conflict with seemingly only one constant – deterioration: "We talk about it as if it only came about a week ago, but it's decades old," says Aburedwan.

The orchestra performed in Ramallah four years ago, involving preparations more complex than twelve-tone music. Syria won't let Syrians travel to Israel, and Israelis aren't allowed into Syria. In the end, the Spanish government issued diplomatic passports – otherwise there would have been no concert. The West-Eastern Divan Orchestra takes the political insanity of the Middle East into the pristine realm of high culture, very much part of its mission.

Beacons of hope with a sense of humour

Then Ramsi Aburedwan talks about how he once tried to get into Gaza; an almost impossible task for Palestinians from Ramallah. Aburedwan and fifteen other musicians did make it to the Erez checkpoint though, where outraged Israeli police officers intercepted him, took him into Sderot in Israel after eight hours and dragged him over to the remains of Hamas rockets fired out of Gaza.

"Look at what you've done!" they told him. "Me? You won't even let me into Gaza!" was Aburedwan's riposte. Daniel Cohen laughs, and the others do too. They certainly have a sense of humour, these beacons of hope.

But at some point they very discreetly indicate that they'd like to go and see Red Square now – up-and-coming talents on their way to see the sights, like a million others. Russia is neutral ground – and on the other hand it isn't.

The tragedy of the Middle East

Vladimir Putin held talks with Hamas here, and there have been recent leaks about Russian deliveries of S300 rocket defence systems to Iran. What is it like to be in Moscow under these circumstances? "When I hear the language," says Daniel Cohen, "it's like at home." 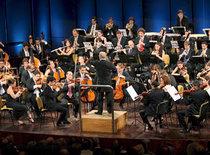 The orchestra, founded by Barenboim and the Palestinian professor Edward Said in 1999, brings together Arab and Palestinian musicians with Israeli and Jewish players

​​ The next day sees a rehearsal at the Tchaikovsky Conservatory. Oistrach played here, and Richter, and Barenboim too for the first time 44 years ago. Now he sits on a high stool, behind him a railing with a towel over it. The momentary impression is of a lifeguard; but not for long.

The previous day, he said what he always says about the tragedy of the Middle East, which has brought him a great deal of criticism from Israel and honorary Palestinian citizenship: that the conflict is not military or political in nature but humanitarian, because two nations lay claim to the same patch of land; that there can be no military solution, only a two-state model; that Israel's relationship with America is unhealthy: "The American hegemony is fading fast, and do you know of an Israeli lobby in Brazil or India? I don't."

Lifeguard with a conductor's baton

But now he's savouring the perfect acoustics under the buttercream whirls of the historical boxes, not getting the orchestra get away with the slightest mistake. In music, Barenboim the reconciler, the good citizen of the world, allows no compromises. He dissects every timid pizzicato, every clattering fortissimo in three to four languages. There is no Middle East bonus, not at work – all that counts for the project is musical quality.

But is there not a threat that politics might drown out the music in times of war? "Not when you're playing Schönberg," one of the musicians says, "then you're too busy dealing with numbers." The orchestra also plays Mozart's Concerto for Three Pianos and Brahms' Fourth Symphony. The beauty of the Mozart piece has something consoling, almost redeeming, but Schönberg's scarred landscapes reflect all the conflict, all the violence, all the longing that marks out these days.

There is something existential in this performance; it reminds Barenboim of the Furtwängler concerts in bombed-out Berlin, and he gives it the laconic description of "higher blood pressure". They are all playing as if electrified, more now than ever. Why do you play with our enemies? Daniel Cohen's friends asked him.

And Ramsi Aburedwan comments: "80 percent of Israelis are in favour of the attacks; many people think they should be even harsher. For someone who knows the region, it is the greatest conceivable message to work in this orchestra."

Never have they felt that as clearly as now. No politician, no Camp David has changed them, they say, as much as Barenboim's “alternative way of thinking about the conflict". If Daniel Barenboim were to retire to the Seychelles tomorrow, the plagued people of Jerusalem and its environs ought to be grateful to him for this alone.

END_OF_DOCUMENT_TOKEN_TO_BE_REPLACED
Social media
and networks
Subscribe to our
newsletter