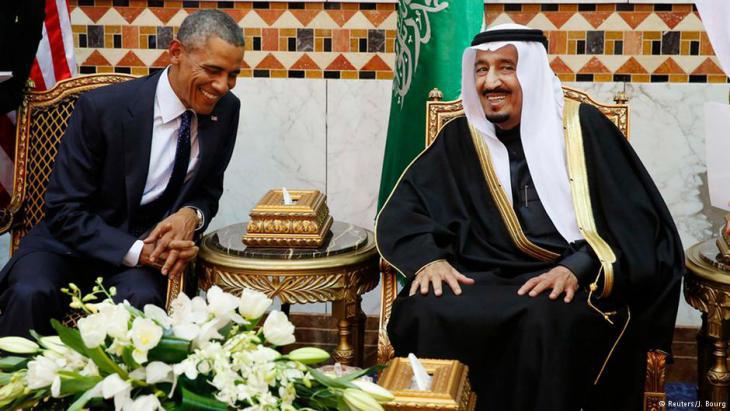 The West's strategy in the Middle East

The islands of stability in the Arab-Islamic world are shrinking. In the face of war and chaos, the West continues to cling to its new-old allies: the "moderate Sunni regimes". The aim of this alliance, which purportedly shares goals and ideals, is that "good Islam" will conquer "bad Islam" with Western support. By Stefan Buchen

The fact that the West is reflecting on the best form of government for the nations of the Middle East is nothing new; it has been doing so in good orientalist tradition since Napoleon invaded Egypt. Nevertheless, Western notions of what constitutes the ideal form of governance for this region have never changed as frequently or as radically as they have in the past 15 years.

For a while, fear of the "eastern masses" and a "genuine eastern state model" such as that of Ayatollah Khomeini meant that leaders in the US and Europe backed dictators who were inwardly staunch and outwardly reliable. Hosni Mubarak was a prime example of this. Gaddafi and Assad too looked as if they had the potential to grow into this role.

Then came 11 September 2001. The Bush administration reacted by prescribing "revolution by war", thereby turning a familiar strategic principle on its head. The invasion of Iraq, the toppling of Saddam Hussein's "republic of fear" and the militarily enforced establishment of a new state based on a democratic constitution and free elections was intended to exert a positive influence on the entire "Greater Middle East" region. The GIs' combat boots were supposed to kick-start a wave of democratisation.

When, in the small country of Lebanon, a group of predominantly young men and women gathered around the bomb-shredded corpse of the politician and billionaire Rafiq al-Hariri to start the "Cedar Revolution", some in Washington believed the plan was working. 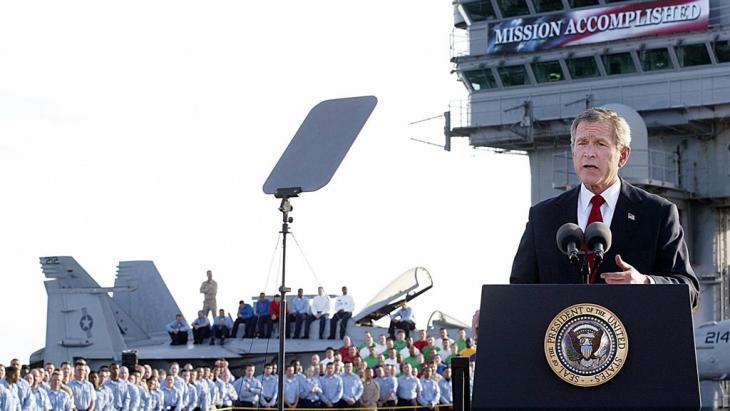 George W. Bush declares the Iraq War over on 1 May 2003. "The invasion of Iraq, the toppling of Saddam Hussein's 'republic of fear' and the militarily enforced establishment of a new state based on a democratic constitution and free elections was intended to exert a positive influence on the entire 'Greater Middle East' region. The GIs' combat boots were supposed to kick-start a wave of democratisation," writes Stefan Buchen

The unexpected arrival of the "Arab Spring"

But events took a quite different course. Iraq descended into sectarian civil war. With the torture of detainees and the massacre of civilians, the occupying US army squandered any credibility it might have had as a "democratic role model" – all favourable concomitants for the renaissance of the good old dictator, who was seen as the more realistic option after all.

Then came the self-immolation of a fruit seller protesting at his harassment by local authorities in a Tunisian provincial town, an event that triggered the "Arab Spring". Suddenly, the feared "Arab masses" were demanding freedom and human rights. The West could hardly say "no" to that. Could the Orientals be capable of democracy after all? "The will of the people must triumph! Even if it leads to the election of the Muslim Brotherhood to the most senior public offices," leaders from Berlin to Washington now muttered to themselves.

Then the carousel began to pick up speed. Many "Arab Spring" countries – first and foremost Syria – descended into chaos and war. Obama had barely uttered the words: "That's not our business" when "Islamic State", with its black-bearded Caliph Abu Bakr al-Baghdadi, emerged from the power vacuums of the devastated zones of the Fertile Crescent.

Obama now has to wage war in the Middle East after all. At the White House and at the NATO summit in Wales he explained that he wants to do this "with our partners in the region". But who are those partners? The Kurds, certainly; minorities in the Middle East have always been allies of the West. That's been a constant since Napoleonic times. But it isn't enough.

Now that the islands of stability are shrinking, and "Islamic State" is claiming to have the monopoly on interpreting policy and theology and is attracting fanaticised hot-heads from all over the world, the West, under the leadership of the US, is knocking together a new lead model for the ideal form of governance in the Middle East. This model foresees the exercising of power by a "moderate" Sunni regent with a predominantly dynastic legitimisation.

Of course, there's essentially nothing new in this model. These dynasties existed back in the era of European colonialism. What is new, however, is the guiding, exemplary function of the model. Systems of governance such as that of the House of Saud in Saudi Arabia, the "Hashemite House" in Jordan, the House of Maktoum in Dubai and the House of Khalifa in Qatar are the lifebuoys to which the West is now clinging so as not to lose all influence in the Middle East.

The "right" Islam should turn things around

These relationships were recently on public view when Obama, Hollande & Co. made the pilgrimage to Riyadh to express their grief at the death of King Abdullah (David Cameron even flew the flags at half-mast in Britain) and everyone conveyed their best wishes to the 79-year-old successor to the throne. Since September, the US has also been keen to emphasise that the Saudi and Jordanian air forces are now involved in the war against IS. The "Free Syrian Army" and the still-to-be-formed "National Guards" in the northern and western Iraqi provinces will bolster the alliance.

The West evidently sees the need to go beyond the purely practical aspects of the co-operation with "moderate Sunni allies" and charge the alliance up with a few new ideas. This is where Islam comes in, or more specifically, the "right" interpretation of the same. In view of what the West perceives as the ideological advance of IS, the "moderate" Sunni rulers should be helping to plant the "true Islam of peace and compassion" in the hearts of the people.

The first person to enthusiastically embrace this task was Queen Rania of Jordan. At the Media Summit in Abu Dhabi last November, she spoke in the name of the "moderate majority" of Muslims – in English, of course – and called for the use of social media to counter the message of the "terrorists".

The Queen linked her familiar role as YouTube, Instagram and Facebook icon with a new function as the "public philosopher" of moderate Islam. Replacing the slogan "broadcast yourself" with "broadcast Islamic moderation" is as quick and easy at that. There are no adjectives adequate to describe this monarchic performance. But it's likely to have had politicians from California to DC slapping each other on the back and perhaps even raising a glass, reassuring themselves that the strategy is working. 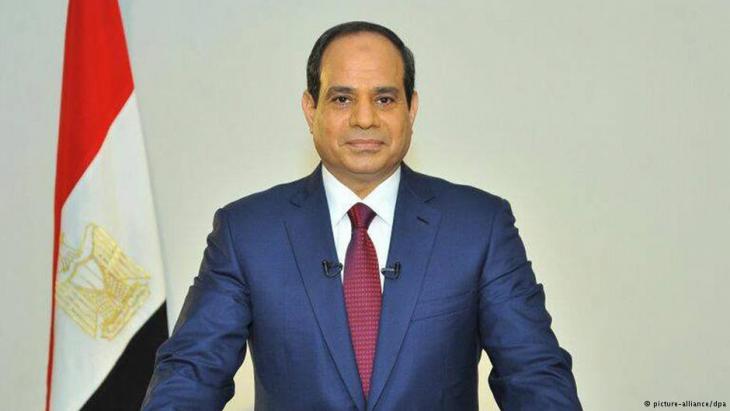 Egypt's President Abdul Fattah al-Sisi (pictured here), has called for a "religious revolution" so that Muslims can oppose the "wrong ideas" of the extremists

Sisi: from dictator to moderate Sunni

Since then, other "moderate Sunni" rulers have joined this choir. President Abdul Fattah al-Sisi, who following his military coup plans to make Egypt an "island of stability" again, called for a "religious revolution" while addressing dignitaries at al-Azhar University, so that Muslims can oppose the "wrong ideas" of the extremists. He went on to explain that this revolution must base itself on the "teachings of the Koran and the Sunna".

How the principles of moderation and rationality sit with the flogging of undesirable bloggers and the locking up of political opponents, is not the key question here. Much more interesting is the question as to the fruit the new political alliance will bear, both for the West and for the moderate Sunni regents.

Even if one or other of the moderate rulers can point to up to 40 male heirs, thereby claiming a certain "dynastic stability", it is difficult to predict a positive outcome for this alliance, which has been drawn together by fate. After all that has happened, does it have enough credibility to peddle an ethically charged political message?

With the Iraq adventure of 2003, the West ruined its credibility in the East for generations to come. Those who engage with this alliance can only hollow out their already weak legitimacy even further. The new alliance could be described as a recipe for the accelerated decline of the Sunni dynasties.

Everything points to the fact that IS and al-Qaida will try to bridge this gap in a bid to take their intensified brand of terror to the Arabian Peninsula. It would be naive to believe that the much more powerful opponent, Iran and its Shia allies, will not exploit the evident weaknesses of the alliance between Sunni rulers and the West. It is obvious that on the battlefields of the Fertile Crescent and Yemen, Iran will even co-operate tactically with Sunni extremists to harm the US and its allies.

It may well be that the West will soon have to come up with a new best-possible state model for the East. But it could also be that after what appears to be the imminent failure of this tenuous alliance, it will no longer have the strength to do so. Perhaps the concept carousel of foreign ministries and think tanks will finally grind to a halt, and all the "players" in the East will avoid the West like the plague.

Stefan Buchen works as a television journalist for the "Panorama" programme on German public broadcaster ARD.

Home
Print
Newsletter
More on this topic
The Middle East in 2014: New regional power gamesStrategies for combating IS: Plea for a wide-angled view of the Arab worldOn the death of King Abdullah of Saudi Arabia: "Riyalpolitik", conservatism and modernisationThe Iraq crisis and the West: The ugly new order in the "Fertile Crescent"
Related Topics
Abdul Fattah al-Sisi, Arab Spring, Arabellion, Democracy and civil society, Iraq War, Islam and the West, U.S. policy in the Middle East, Wahhabism
All Topics

"The people aren’t ready for democracy" has been the constitutional basis for Arab tyranny, its favourite slogan and its sacred narrative for more than a century. Yet, asks Khaled ... END_OF_DOCUMENT_TOKEN_TO_BE_REPLACED

A new global database shows a significant gap in reported COVID-related deaths, suggesting the actual worldwide death toll is short by at least 1 million. That's due in part to ... END_OF_DOCUMENT_TOKEN_TO_BE_REPLACED

Two decades after the attacks of 11 September 2001, the West faces the shattered debris of its failure – not only in Afghanistan, but also in Iraq, Syria, Libya and Yemen. What ... END_OF_DOCUMENT_TOKEN_TO_BE_REPLACED

The coronavirus pandemic has turned lives upside down all over the world. In the Middle Ages, however, people lived with epidemics all the time. The best and most famous ... END_OF_DOCUMENT_TOKEN_TO_BE_REPLACED

In Ancient Egypt, the pharaohs had "solar boats" built to take them into the afterlife. One of these boats was discovered in 1954. It has now been moved to the Grand Egyptian ... END_OF_DOCUMENT_TOKEN_TO_BE_REPLACED

Attracting little attention from the world at large, Egypt's military regime has been mercilessly going after dissidents. Now, the first executions of prominent members of the ... END_OF_DOCUMENT_TOKEN_TO_BE_REPLACED
Author:
Stefan Buchen
Date:
Mail:
Send via mail

END_OF_DOCUMENT_TOKEN_TO_BE_REPLACED
Social media
and networks
Subscribe to our
newsletter