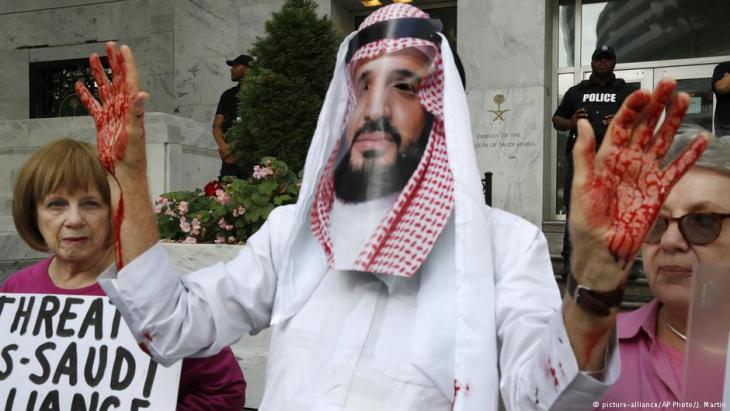 The world according to Mohammed bin Salman

Saudi Arabia first denied the Khashoggi murder and then blamed it on rogue security agents. Neither version has enjoyed much credibility, but the ability to make the population repeat incredible claims is itself a form of power for Arab autocrats, argues Hannes Baumann

The Saudi reaction to the murder of Jamal Khashoggi seems, repeatedly, to defy reality. The monarchy initially rejected all responsibility. When evidence leaked by Turkish investigators became overwhelming, they changed the story to suggest a surprise physical altercation was followed by accidental death. They then acknowledged that Saudi operatives were behind the killing, but claimed it had been a rogue operation. All three versions are widely seen to lack credibility. Is this just a case of bad PR?

Part of the answer is that Mohammed bin Salman, the crown prince of Saudi Arabia, seems to have been genuinely surprised at the vehement reaction to the murder. Being caught off guard, however, is not the only probable reason for Riyadh’s doubling down.

Once the regime denied responsibility for the crime, repeating the official story – however incredible – became a loyalty test for Saudi citizens. This is the argument put forward by Laleh Khalili, a professor in Middle Eastern politics at SOAS in London. She suggested that it is Riyadh’s way of practicing politics of "as if". This is an idea that the scholar Lisa Wedeen first developed in the context of Syria and the personality cult that once surrounded Hafez al-Assad, president Bashar al-Assad’s father.

Nothing less than utter fealty

After seizing power in 1970, Hafez al-Assad forced Syrians to parrot increasingly absurd claims. As a result, he was not only unceasingly said to be the beloved father of the nation, but also the nation’s "premier" pharmacist, lawyer, or doctor.

The purpose of these absurd claims was not to achieve ideological legitimacy by offering a plausible interpretation of reality. It was, Wedeen argued, to demonstrate the power of the regime by forcing people to repeat a party line that was patently untrue. A similar dynamic seems to be at play in Riyadh.

A recent English-language comment piece in the Saudi Gazette was symptomatic. It appeared on 18 October, when Riyadh was still vehemently asserting its innocence. The article asserted that the disappearance of Jamal Khashoggi was "nothing but a comedy act" that was "orchestrated by haters and ill-wishers in Qatar" – Saudi Arabia’s Gulf rival. Doha’s malicious ruse would soon be exposed and Saudi Arabia would triumph.

There was also "a group that is playing a dangerous role in the dark" – an oblique reference to Saudis who were doubting the official version "by spreading rumours and circulating fake news among Saudis in an effort to make them doubt their government".

Home
Print
Newsletter
More on this topic
Trump, MbS and the aftermath: Did the global order die with Khashoggi?Tyranny in the Islamic world: Keeping the tribe aliveViolence in the Arab world: Born of a barbaric state
Related Topics
Assad regime, Free speech and censorship, Freedom of the press, King Salman bin Abdulaziz al-Saud of Saudi Arabia, Mohammed bin Salman, Rule of law, Wahhabism
All Topics

Turkey's parliamentary and presidential elections are scheduled for June 2023. But they are already casting a shadow. While the opposition is calling for early elections, ... END_OF_DOCUMENT_TOKEN_TO_BE_REPLACED

In his book "Ground Zero: 9/11 und die Geburt der Gegenwart" (Ground Zero: 9/11 and the Birth of the Present) Islamic scholar Stefan Weidner analyses the consequences of the ... END_OF_DOCUMENT_TOKEN_TO_BE_REPLACED

The rollout of coronavirus vaccines in the Middle East and North Africa is already taking place on a massive scale, with the United Arab Emirates leading the way. Nevertheless, ... END_OF_DOCUMENT_TOKEN_TO_BE_REPLACED

The Prophet Muhammad never executed anyone for apostasy, nor encouraged his followers to do so. Nor is criminalising sacrilege based on Islam’s main sacred text, the Koran. In ... END_OF_DOCUMENT_TOKEN_TO_BE_REPLACED

Surging coronavirus cases in many parts of the world have overshadowed the start of this year's Muslim holy month of Ramadan, with festivities once again curtailed by contagion ... END_OF_DOCUMENT_TOKEN_TO_BE_REPLACED

As Qatar prepares to host the 2022 FIFA World Cup, the country has come under fire for its treatment of migrant workers, with some nations calling for a boycott of the contest. ... END_OF_DOCUMENT_TOKEN_TO_BE_REPLACED
Author:
Hannes Baumann
Date:
Mail:
Send via mail

END_OF_DOCUMENT_TOKEN_TO_BE_REPLACED
Social media
and networks
Subscribe to our
newsletter