Winner of the Student Oscar: a little girl in a bombed-out flat in Syria. The television is her only window to the world – but even this is taken away from her. Nikolas Fischer watched the impressive film

Suddenly, "Islamic State" (IS) no longer accepts televisions. People throw them out through the windows of their bombed flats onto the rubble-covered street outside. Tala's father also has to abide by the new rule – whether he wants to or not. His eight-year-old daughter doesn't want to. She can't accept it. When she breaks the rule without her father's knowledge and brings a still intact television back into the house, it is a matter of life and death.

"Tala'vision" is a play on words. Many Arab children pronounce the English word "television" for television that way, says Jordanian screenwriter and director Murad Abu Eisheh in interview.  In 28 minutes, the film impressively succeeds in conveying Tala's vision. It is sad and poetic in equal measure. Through Tala's eyes, so to speak, we see her world – which lies in ruins.

Tala's father (Ziad Bakri) has blocked the window with a board. This not only blocks out the sun. Through the remaining gap, the girl looks out onto a bombed-out street, somewhere in Syria, somewhere where IS is in charge.

Tala particularly enjoys watching football, especially the games of Lionel Messi, whom she imagines playing on the same team as her. Watching football or even kicking the ball herself is anything but normal in the world Tala lives in, says Murad Abu Eisheh. In the Middle East, girls usually play with dolls and only boys with footballs.

When the TV is no longer there, Tala tries to bring her idol to life on a trading card by alternately squinting her eyes. The camera lets us look through Tala's eyes as she does so. When she tries to play football herself in the flat, the lampshade is damaged. She is not allowed to play outside in the street. "Go inside, bitch, I hope the IS executes you," says a passing boy when he sees her at the window. 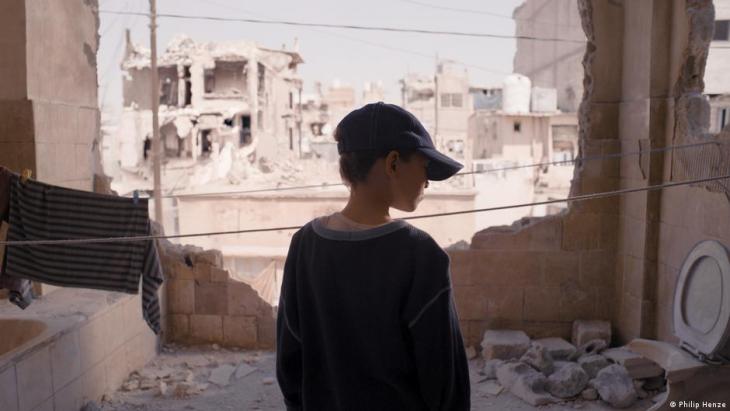 Trapped in a reality destroyed by war, with the hope of one day playing football, 8-year-old Tala finds solace and freedom in a forbidden television. This secret television, however, means she and her family are dicing with death

Murad Abu Eisheh won the Student Oscar 2021, the award given to film students by the Academy of Motion Picture Arts and Sciences, for his film. This is a great honour, says the graduate of the Filmakademie Baden-Wuerttemberg in Ludwigsburg, Grmany. "It is a turning point in our careers so far. What we make of it now is up to us." The production had already won the jury and audience award for best medium-length feature film at the Max Ophuels Film Festival earlier this year.

"Tala'vision" is not a true story. But as is so often the case, the setting of the film is based on true events or experiences – in this case especially on two images that Murad Abu Eisheh could not get out of his head. Picture 1: At the Jordanian-Syrian border, he observed a little girl walking all alone. She followed the other Syrian refugees into Murad's own, safe homeland of Jordan. It is an image that still haunts him, says the director.

Picture 2: In a small newspaper article he read that IS had banned the population from owning television sets. Internet is an absolute luxury in conflict areas like Syria – so the television takes on the role it occupied many, many years ago in Europe: it becomes a window on the world. As it was during his childhood in Jordan, adds Murad Abu Eisheh. 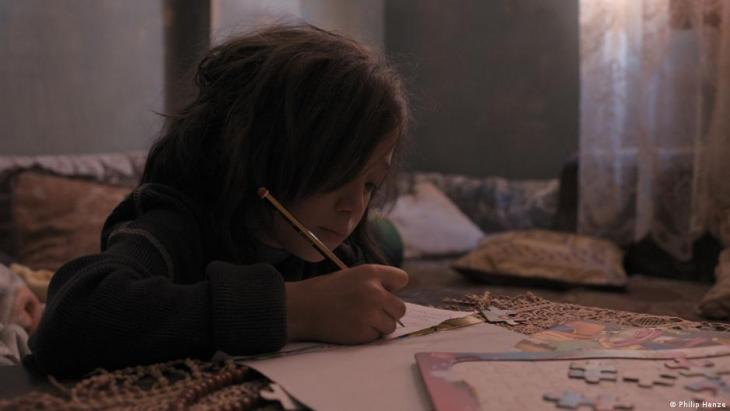 Tala writes pretend letters to the boy next door: "Tala's claustrophobic state of being cut off, her childlike innocent desire for freedom, her longing for normality – it is all a hair's breadth from being physically tangible," writes Fischer

For "Tala'vision", the director worked for the first time with a child "on whose shoulders the entire film rested". This is exactly why it was so important to find the right Tala. He decided from the outset that he did not want a Jordanian child actor for this role, but "someone who knows this reality". After an elaborate casting with several hundred girls – he himself met about 200 of them – he found what he was looking for: Aesha Balasem, only seven years old when the film was shot, embodies Tala in an impressive way. She is a refugee herself and speaks Arabic with a Syrian accent.

From the moment she entered the room at the casting, her behaviour was special, says the director: the girl appeared shy, but at the same time confident and self-assured. In the course of time, he realised how traumatised Aesha – Tala – was by her own experiences of war. In interview, he misspoke, frequently calling Aesha Tala as a matter of course.

Tala's claustrophobic state of being cut off, her childlike innocent desire for freedom, her longing for normality – it is all a hair's breadth from being physically tangible. This is thanks above all to her captivating screen presence, but also through the interplay of many other cinematic devices: cinematographer Philip Henze works a lot with the handheld camera, with shakiness, blurring and changes of perspective. His camera work was honoured with the German Camera Award and the Michael Ballhaus Award.

Much of the film is very dark – which has to do with the fact that Henze almost completely dispensed with artificial light. The long phases of boredom or "silence" – which is never really silent, with bombs detonating dully in the near distance, rifles rattling, or aeroplanes flying past – give way at the end to a sombre, threatening sound.

The film was shot in a Palestinian refugee camp near Amman in Jordan, reveals producer Philipp Raube. Production designer Julian Knaack and his team prepared entire streets there to make them look like a war zone. They also worked with visual effects, for example in the scene in which Tala looks out of the bombed bathroom. For him as a producer, it was important, especially at the time – 2019 – to make a film that demonstrated the reasons and causes for people leaving their homes. The refugee routes and how Europe deals with them have been a big issue across the continent for years. However, we have not really understood what the reality is like in the countries on the ground, says Philipp Raube.

Children do not have to lose their families to become traumatised, says Murad Abu Eisheh. Even "minor things" can suffice, he says. "Hundreds of thousands of children in war zones lose their childhood and their dreams." These children inevitably take these experiences with them and become "broken adults". They are "broken generations" who often cannot escape the "cycle of violence".

Tala'vision" is not light entertainment. Nevertheless, watching this sad and poetic film journey is certainly worthwhile.

The murder of a female student at Mansoura University in the Nile Delta has sparked a long overdue debate on femicide in Egypt. Karim El-Gawhary reports from Cairo END_OF_DOCUMENT_TOKEN_TO_BE_REPLACED

When times are tough, the exchange of ideas and perspectives becomes especially important. It takes dialogue. And at Deutsche Welle, we need distributors and cooperative partners ... END_OF_DOCUMENT_TOKEN_TO_BE_REPLACED

Women in the Levant have long used needlework to depict the region’s history, its landscapes, customs and traditions. Intricately embroidered panels, varying in style, colour and ... END_OF_DOCUMENT_TOKEN_TO_BE_REPLACED

A straightforward message emerged from last week’s meeting in the Negev desert of the foreign ministers of four Arab countries, Israel and the United States: Israel is key to the ... END_OF_DOCUMENT_TOKEN_TO_BE_REPLACED

Israelis, Arabs and Iranians are landing back in their home countries to the tearful relief of relatives, as evacuations of nationals caught up in the Russian invasion of Ukraine ... END_OF_DOCUMENT_TOKEN_TO_BE_REPLACED

A number of Arab League member states have announced in recent weeks that they intend resuming relations with the Syrian regime. A potential invitation to the Arab League summit ... END_OF_DOCUMENT_TOKEN_TO_BE_REPLACED
Author:
Nikolas Fischer
Date:
Mail:
Send via mail

END_OF_DOCUMENT_TOKEN_TO_BE_REPLACED
Social media
and networks
Subscribe to our
newsletter