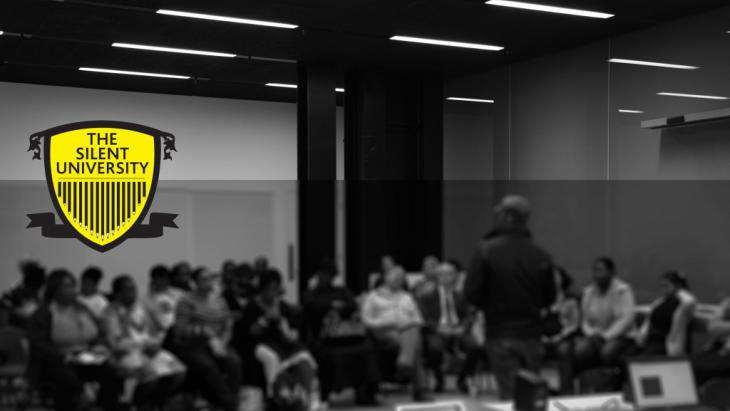 Theatre and the refugees
Getting the ball rolling

No cultural institution is currently more intensively engaged in helping refugees than the German theatre scene. Yet it′s still rare to find refugees taking the initiative as independent players. The Silent University aims to change all that. By Dorothea Marcus

Three years ago the venue was a Schlecker drugstore. Then the shop stood vacant, just one of the many empty premises in downtown Mulheim an der Ruhr. Since June 2015, however, the corner block with large windows has been transformed into a beacon of hope: the ″Dezentrale″ (Decentral), barely 400 metres from the main railway station, is now a freshly renovated, airy space.

A library awaits donations from the general public; the yellow-and-black university logo is emblazoned across the shop windows. Here in 2015, as part of the Impulse theatre festival, the Silent University opened its newest branch, the existence of which has been assured until the end of 2016 by funds from the Federal Cultural Foundation.

This network for the forgotten knowledge of refugees was founded back in 2012 by the Kurdish conceptual artist Ahmet Ogut at the Tate Gallery in London. Born in 1981 in Turkey, he now lives in Amsterdam.

In 2009 Ogut designed the Turkish pavilion at the Venice Biennale. In 2012 he had the idea of reactivating knowledge that had fallen silent because of war, flight or bureaucracy – thus preventing doctors and engineers from ending up as taxi drivers, cleaners, or thoroughly depressed. His goal: ″The exchange of knowledge and democratic education to the mutual benefit of teachers and students″.

In Mulheim the Silent University′s activities are co-ordinated by Kirsten Ben Haddou, a qualified educationalist with an intercultural focus and considerable experience in refugee work. City curator Sophie Goltz is the university′s artistic director in Hamburg. ″We′re not a university in the traditional sense,″ she explains. ″You can′t get any educational qualifications here.″ Although the Silent University has contact with online universities for refugees, such as the Kiron University, there are few similarities.

Network of the intellectual and the practical

At the opening in Mulheim, the Bochum-based social worker and native Iranian Hanif Hidarnejad spoke about Germany′s failure to make use of valuable resources in its dealings with refugees. A few days later in June, the Iranian Behnam Igzeer, once head of the Christian-Catholic school in Baghdad, explained the secrets of Arabic calligraphy.

A relic of distant times when Iraq was associated with high culture and not instantly with the crimes of Islamic State. It is this kind of knee-jerk ascription that the Silent University aims to counteract.

Kirsten Ben Haddou has already found four lecturers. Lectures are held on a bi-monthly basis. She also fields a network of fifteen or so ″consultants″ who provide help with practical things such as the recognition of educational qualifications and flat hunting.

The search for lecturers, says Ben Haddou, was not easy. Although they receive fees and travel expenses, refugees are often too preoccupied with their daily cares and the search for real work to take part in other activities. ″And their professions don′t always necessarily make suitable lecture material.″ Sophie Goltz says much the same thing. Since September 2015, the debate surrounding the refugee issue in Hamburg has changed drastically.

The reaction of the Silent University has been to introduce German courses, anti-bias workshops on the mechanisms of discrimination and panel discussions, most recently with Kilian Kleinschmidt, former head of the Zaatari refugee camp in northern Jordan, as well as with Rwandan and Syrian refugees. ″We are increasingly noticing a hierarchy among the refugees,″ Goltz admits. ″With the Silent University, we particularly want to provide a space for them to come into contact with each other.″ 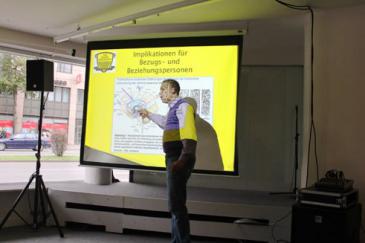 The principle of self-help: Lectures are held on a bi-monthly basis and there is also a network of fifteen or so ″consultants″ who provide help with practical things such as the recognition of educational qualifications and flat hunting

Common to both German branches of the Silent University, however, is that they give the refugees a voice. In this respect, they frequently achieve more than the some 80 theatres listed in the online portal nachtkritik.de, which offer direct refugee assistance via a mixture of social and artistic work.

The theatres collect donations, provide accommodation, promote debate, arrange visits and stage performances. At the Deutsches Theater in Berlin refugees sleep in the dressing-rooms every night; the Schauspiel Koln has assumed the sponsorship of two refugee hostels, holds theatre courses for children and is smartening up the hostel gardens.

The Munich Kammerspiele is helping to build a refugee hostel on the Viktualienmarkt and, of course, it often puts refugees themselves on stage. The level of commitment is extensive. Matthias Lilienthal, artistic director of the Kammerspiele, is fond of repeating the sentence: ″I prefer good social work to bad theatre.″

Still, the response of the theatres to the refugee crisis has also called forth its critics. The German director Michael Thalheimer was quoted by the ″Wiesbadener Kurier″ as saying that such social projects were merely vain posturings and that, through them, the theatre risked doing away with itself.

And in fact, when you look at the list published by nachtkritik.de, it is striking how few of the artistic initiatives are actually committed to giving the refugees their own voice. But they do exist: the project Ruhrorter, for example, at the Theater an der Ruhr in Mulheim, where refugees conceive, stage and perform their own theatre productions.

Or at the Schauspiel Wuppertal, where Syrians – with the help of local writers – put their stories of flight into words in ″Wir erzahlen um unser Leben″ (We talk about our lives). And then there's the Theater Osnabruck, where Syrian theatre professional Anis Hamdoun is designing his own projects. There is still much to discover in this new homeland of Germany.

Fariduddin Attar’s "The Conference of the Birds", one of the seminal works of Islamic mysticism, has recently been published in sumptuously illustrated German translation. It ... END_OF_DOCUMENT_TOKEN_TO_BE_REPLACED

Egyptian authorities have Mada Masr in their sights once again after critical reporting. But the editor of the country's last independent news source is adamant they will continue ... END_OF_DOCUMENT_TOKEN_TO_BE_REPLACED

Like Christianity, Europe's history is one of migration. Both have strong roots in the Orient and in cultures thousands of years old. Cultural historian Bernhard Braun invites us ... END_OF_DOCUMENT_TOKEN_TO_BE_REPLACED

Mohamed Abla is the first visual artist from Egypt to be awarded the Goethe-Institut’s Goethe Medal, Germany’s highest honour in the area of foreign cultural policy. Stefan ... END_OF_DOCUMENT_TOKEN_TO_BE_REPLACED

Bachtyar Ali sends the hero of his latest novel – "Mein Onkel den der Wind mitnahm" – literally flying. Jamshid is so thin after his years as a political prisoner that a gust of ... END_OF_DOCUMENT_TOKEN_TO_BE_REPLACED
Author:
Dorothea Marcus
Date:
Mail:
Send via mail

END_OF_DOCUMENT_TOKEN_TO_BE_REPLACED
Social media
and networks
Subscribe to our
newsletter