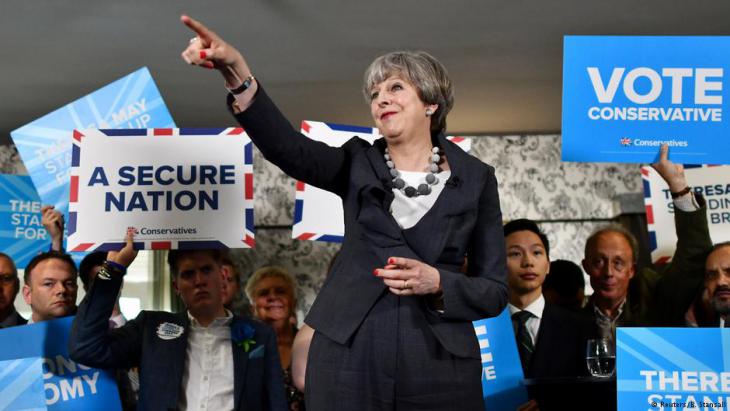 Theresa May, UK Muslims and the fight against terrorism
Hoist with her own petard

A few days before the UK general election, Prime Minister Theresa May announced a plan to curtail human rights in an attempt to catch Islamist terrorists. It was all too clear that she was targeting the Muslim minority per se as a tactic to win. She failed. Yet her outrageous claims are not likely to go away soon. Commentary by Alexander Goerlach

Human rights activists throughout the United Kingdom and beyond have no reason to stand down following the result of the UK general election. Prime Minister Theresa May, who announced prior to election day her plan to curtail human rights in a bid to combat Islamist terrorism, lost a decisive portion of the electorate that had formerly voted conservative.

Forced to form a minority government, the politician who toyed with xenophobic sentiments in her campaign is now reliant on a small yet embittered party – the Democratic Unionists – which would seem to consist largely of religious pre-modernists and homophobes. Theresa May's notion of amending the human rights laws, as she calls the enshrined achievements of modern European history, was nothing short of outrageous.

The prime minister′s actions have put the United Kingdom on a par with nations such as Poland and Hungary. The latter, rather than fussing about human rights, simply stated that they would not take in any refugees of Muslim faith due to their countries′ ′Christian′ heritage. England, however, is the birthplace of the Magna Carta. Indeed, it was British lawmakers who helped formulate the European Convention on Human Rights. So the United Kingdom is not just any country and one would hope it would act according to its historic legacy and along the lines of its prior achievements in the human rights sphere.

It is easy to forget that the United Kingdom joined forces with the United States after the terror attacks of 9/11 to promulgate nothing less than the values of liberal democracy in Iraq. Lacking the approval of the international community, this endeavour proved rotten from the outset. Fifteen years on, these much vaunted values appear to be worth little in the country of their birth. The alleged aim of the measures is to tackle Islamist terrorists amidst Western societies. Alas, experience shows that initiatives like this tend to inflame general suspicion against minorities - in this case, the Muslims. 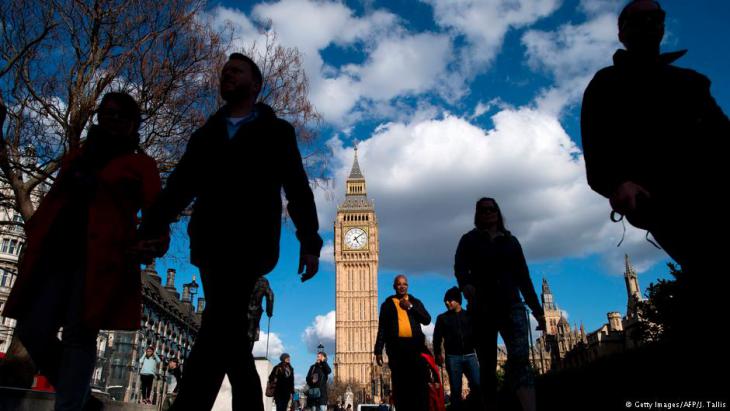 Voters abandoned the Conservatives in droves: "identifying one, two, ten or even a hundred dangerous Islamist individuals – all of whom need to be brought to justice within the existing, constitutional framework – does not make all Muslims villains. Whatever the machinations of the political establishment, the British electorate appears to understand the principal that England once helped to formulate," writes Goerlach

It raises the question why these measures are deemed appropriate at such a time of crisis: the attackers involved in most of the recent terror attacks in Western Europe were already known to both the relevant police forces and counter terrorism agencies. Had the existing legal framework been applied effectively, had the agencies co-operated more closely together, it is arguable that attacks such as the one on the Berlin Christmas market could have been prevented.

Indeed, during these tragic events, it is often Muslims who can be found standing up to the attackers: in January 2015, 24-year old Lassana Bathily, who was working in a kosher supermarket in Paris, hid customers from the brutal assailants in the cold storage room. It should also be remembered that, in purely numerical terms, the largest group by far to fall victim to Islamist terrorism are Muslims themselves.

These days the Muslim community is under pressure in a two-fold way: for one thing, Muslims in Nigeria, for instance, know how Muslims in Malaysia live. This begs the question as to the ′true nature of Islam′. The omnipresence of Internet, social media and satellite TV compounds the situation. Secondly, frequent encounters with Western modernity heighten the pressure yet again: faced with a plurality of lifestyles and religions, the Muslim community is called upon to define its place in a globalised modern world.

At this point, it would be more appropriate to support rational and decent movements in the Muslim world that are indeed trying to reconcile modernity with the conventional framework of these societies. It took a long time for the West to embrace a prosperous future rather than a religiously codified present and past. But by calling out the Muslim minority, the opposite will be achieved: militant and hyper-conservative groups and actors will claim that the West hates Muslims altogether, despising every aspect of the Muslim way of life.

Whenever there is a terror attack, the public rightfully demands that the Muslim community speaks out to distance itself from these barbaric crimes and acts of violence, perpetrated in the name of God. The public does this, at the same time forgetting that Muslims themselves are outcast rhetorically, to say the least, by the political leadership and denied basic rights such as the presumption of innocence.

With her remarks on human rights, Theresa May is seeking to cloak the Muslim community in a blanket of suspicion. As French religious philosopher Rene Girard would see it, she is setting out to "scapegoat" a minority. Making one group responsible for all the problems experienced in a society, he argues, is a popular way of distracting attention from the real problems.

The UK voters, however, have seen through Theresa May′s game: her party has been stripped of the majority it would have needed to engage in such an outrageous endeavour. As Mrs. May's government is planning to lead the United Kingdom out of the alliance of the European Union, the Muslim community may well be the first group to feel the effects of a deterioration in co-operation with the secret services of mainland Europe.

Yet, without proof, there is no legitimacy in claiming to know who a perpetrator is. Nor does identifying one, two, ten or even a hundred dangerous Islamist individuals – all of whom need to be brought to justice within the existing, constitutional framework – make all Muslims villains. Whatever the machinations of the political establishment, the British electorate appears to understand the principal that England once helped to formulate.

Alexander Goerlach has conducted research in the field of politics and religion at both the University of Harvard's Center for European Studies and the Divinity School. Holding PhDs in linguistics and in comparative religion, he is a senior fellow to the Carnegie Council for Ethics in International Affairs and an op-ed contributor to the New York Times. Alexander Görlach is also the founder of the media-initiative www.saveliberaldemocracy.com.

Home
Print
Newsletter
More on this topic
Islam and violence: There is a differenceThe Islam debate: The dual consciousness of MuslimsMuslims in Germany following the Berlin attack: "It's not our fault!"
Related Topics
'Islamic State' | IS, Human rights, International terrorism, Islamophobia, Jihadism | Jihadists, Muslims in the West, Radicalisation
All Topics

Since returning to power in Afghanistan, the Taliban have steadily eroded the rights and opportunities of women and girls, particularly their access to education. But Afghans are ... END_OF_DOCUMENT_TOKEN_TO_BE_REPLACED

The book "The Invention of the Maghreb: between Africa and the Middle East" prompts us to review basic terminology. This includes terms that we use almost every day as if they are ... END_OF_DOCUMENT_TOKEN_TO_BE_REPLACED

Tunisia has been going through a severe economic and political crisis in recent years. More than one in three young people there are unemployed. For many skilled, qualified and ... END_OF_DOCUMENT_TOKEN_TO_BE_REPLACED

At the end of every year, the team at Qantara.de gives you a run-down of the ten most-read articles on the site over the past 12 months. Here is a quick overview of the stories ... END_OF_DOCUMENT_TOKEN_TO_BE_REPLACED

The government in the Netherlands, one of the last European nations to abolish slavery, has made an historic apology. But some feel that there is still a long way to go. By Ella ... END_OF_DOCUMENT_TOKEN_TO_BE_REPLACED

To celebrate the bicentenary of the deciphering of the Rosetta Stone, the British Museum is running an exhibition entitled "Hieroglyphs: unlocking ancient Egypt" until February ... END_OF_DOCUMENT_TOKEN_TO_BE_REPLACED
Author:
Alexander Görlach
Date:
Mail:
Send via mail

END_OF_DOCUMENT_TOKEN_TO_BE_REPLACED
Social media
and networks
Subscribe to our
newsletter