Thilo Sarrazin maintains that Muslim immigration is making Germany more and more stupid. Why on earth should we have to pay attention to his bizarre hypotheses? Even taking the slightest interest makes them appear worthy of discussion. A comment by Robert Misik

"Thilo Sarrazin's hypotheses are muddled, arrogant, hurtful, dotted with derisive formulations and express a bizarre lack of respect on the part of the elites towards society's 'losers'," writes Robert Misik

​​ The hypotheses the German Federal Bank's official and former SPD politician Thilo Sarrazin has set out in his book Deutschland schafft sich ab (Germany Is Abolishing Itself) and in a wealth of interviews over the past week are so hair-raisingly ridiculous that any objective argument ought to be superfluous. One could take refuge in irony – should intelligence really be inherited, one might say, there is no point in reproaching Sarrazin.

Yet if one wants to say anything substantial about his bizarre statements, the question soon arises: does any attempt to account and dispute his theories and point out their implausibility not make them appear worthy of discussion?

To make matters worse, Sarrazin does not simply present his points in a laconic style. No, he labours his points, repeating them and insisting on them, the more abstruse they are. In every interview he returns what feels like a hundred times over to the alleged fact that intelligence is in our genes and stupidity is hereditary, and that a society has a problem if the stupid sections of the population have an above-average fertility rate: "If the averagely less intelligent people have higher fertility, the average intelligence of the population falls."

All this is jumbled up with popular eugenics and addled, oversimplified Darwinism. And yes, I'm afraid there's no other way to put this: The author's own obvious stupidity comes into play – this is a man who denies others their intelligence but appears to possess not a trace of social intelligence himself. Or why else would he labour his most obscure hypothesis the most, namely that a small number of unintelligent individuals who multiply like rabbits are ruining the societal gene pool. 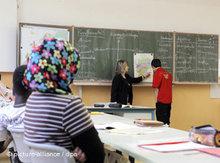 Underfurnished in the brain department? "Thilo Sarrazin is thus introducing a new racist discourse not only to the immigration debate, but also to the education debate," according to Misik

​​ And we genuinely want to discuss this nonsense?

Let's be brief: Thilo Sarrazin maintains that Muslim immigration is making Germany more and more stupid. Firstly, he says, because Muslims tend to be in the 'dummies' camp, genetically speaking. And secondly for cultural reasons, because good academic achievements are allegedly not particularly prestigious among Turks and Arabs, for example ("a cultural problem").

The third factor he posits is that there is a correlation within ethnic and cultural communities, a "positive statistical conjunction between intelligence, socio-economic background and educational level". In other words: Not only are the Germans cleverer than the Muslim immigrants, among the Germans it's also the case that the educated and wealthy – to put it plainly: the upper class – are genetically cleverer than the lower classes. In the old days, however, the stupid people had fewer children than the clever people, which optimised the gene pool. Now it's the other way around. Ergo, we're turning into a nation of idiots, as it were.

Thilo Sarrazin is introducing a new racist discourse not only to the immigration debate, but also to the education debate. If many Muslims remain on the margins of society and fail to climb the social ladder – blame them, they're just too dumb. If the new underclass stays at the bottom and the children inherit their parents' low social status, entering life as born losers, it's not a scandalous failure of social and educational policy – it's the logical consequence of the fact that the dummies presume to pass on their modest intelligence.

The natural conclusion – Sarrazin does not even have to state it explicitly – is that any attempt to improve the prospects of these prospect-less individuals through educational reform and pedagogical effort is doomed to fail.

In a nutshell: The people at the bottom of society belong at the bottom. And worse: They make life harder for us educated, refined, clever people.

Were Mr. Sarrazin a member of the neo-Nazi NPD, no one would waste time on his ideas, at the very most asking the ironic question of how he rated the genetic intelligence quotient of the beer-infused skinheads who cheer on his postulates. But Sarrazin is a member of the SPD and wants to remain in the party, expressly because his position, he maintains, is a classic Social Democratic one. The pressing question, of course, is how he came to this grotesque idea. Let's make an exception here and attempt an empathetic, hermeneutic reading. What might be going on in Sarrazin's mind to prompt this misled thought?

​​ One classic Social Democratic position is "knowledge is power", which is why traditional Social Democrats wanted to educate the masses. This idea of empowerment through education spread, meaning that education was held in high esteem in underprivileged sectors of society during a certain era – let's says in the period from 1900 to 1980. Parents told their offspring: You need to learn, child, to make something of yourself. Education promised to help people up the social ladder. And it kept that promise for several decades.

Today, it holds less and less, with that promise particularly unpromising among ethnic minority communities. Children born into the new immigrant underclass grow up with a different awareness, namely: even if they make an effort it's no use. They only have a minimal chance. The same goes for the children of the native German underclass, incidentally.

One thing is definitely true: It is a problem for the whole of society that this "Social Democratic thread" has torn, that there are now zones of radical exclusion in which the promise of social improvement through education no longer has a draw. And another truth is that a fatal cycle of exclusion and self-exclusion is in operation here. But it is primarily the political elites that have been incapable of renewing the integrating idea. Insulting the victims of these processes, at any rate, is not a clever strategy.

Thilo Sarrazin's hypotheses are muddled, arrogant, hurtful, dotted with derisive formulations and express a bizarre lack of respect on the part of the elites towards society's "losers". This is a man of such misplaced arrogance that he ought to provoke peals of laughter. Take the accusation he hurls at the underprivileged – of living a life of sloth on state benefits and having no drive to assert themselves in the maelstrom of the free economy. A hilarious statement from a man who has spent his entire life in the employ of the state and state-related industry, and who has sailed through his entire professional career – from the ministry to the railway company to Berlin's finance senator to Germany's Federal Bank – on his party ticket.

As such, it is not his ideas that are the most scandalous. Much worse is the reaction to them. Why does this botch-job end up being distributed via a preview in Spiegel magazine and popularised in talk shows, why does such an addled brain deserve the honour of a two-page interview in the weekly Zeit – instead of being ignored?

Of course it's because the papers know there is an echo chamber in our society for the cold, hard misanthropy that Sarrazin expresses. Because there are milieus in which this racism has long been flourishing. Because the self-appointed and ever-present spokespeople for these milieus are of the bizarre conviction that they are victims of "political correctness" and therefore proudly wear the badge of voicing "suppressed" opinions, claiming it takes courage to speak the "plain truth", and that they have this courage.

Daring heroes who "call a spade a spade". As if there were any idiotic opinion that goes unprinted in our society, or is not broadcast into every last living room via trashy TV.

No, it does not take courage to insult other people. The ostentatious joy of despising others gets you onto the bestseller lists nowadays. Stupidity, if not hereditary, is certainly profitable.

END_OF_DOCUMENT_TOKEN_TO_BE_REPLACED
Social media
and networks
Subscribe to our
newsletter