Thilo Sarrazin: "Germany Is Abolshing Itself"
Take Heed: the End is Nigh!

Thilo Sarrazin has written a book about Germany's decline. He sees himself as a voice in the wilderness, but his proposals for saving the country do little to help. A review of "Germany Is Abolishing Itself" by Matthias Drobinski 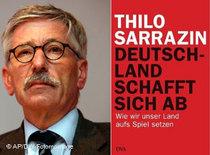 Are Muslim immigrants making Europe "poorer and stupider"? Yes, they are, according to Thilo Sarrazin, German economist, Social Democrat politician and author

​​Now and again someone comes up with an idea. And sometimes that idea isn't all that bad, and often at least worthy of debate. Then, however, something rather strange happens. The idea takes control of its creator; it becomes independent and increasingly radical, the creator becoming the slave of his own creation. Take the case of Necla Kelek, for example, the sociologist who first made people aware of the plight of many Muslim women in Germany and who now would like nothing better than to abolish Islam.

Something similar has happened with Thilo Sarrazin, the one-time SPD Berlin finance senator and current board member of the German Federal Bank. He began, rightly, by calling for more personal responsibility and commitment from those on social welfare and from immigrants. But this has now become the foundation for a social philosophy whose aim is nothing less than the preservation of the German fatherland. Sarrazin, the captive of his own idea, has now turned his philosophy into a book, one which has attracted a great deal of publicity, been given advance publication, and will doubtless sell like hot cakes.

Blame it on the integration-shy immigrants

The book is Sarrazin's attempt to lend substance and credibility to what thus far has been pure polemic. "Deutschland schafft sich ab" (Germany Is Abolishing Itself) is a work crammed with figures, graphs and tables, containing rather abstract references to "labour participation" and "demands". All of this is intended to lend credibility to his central thesis on the country's decline, a thesis which goes roughly as follows: Germany is dumbing down, and the country is suffering from a shortage of skills, lacking engineers, chemists, innovators and inventors.

Ethnic threat: According to Thilo Sarrazin, the fecundity of the Turks in child-bearing will soon turn the Germans into a minority in their own country

​​What this all boils down to is academics who produce too few children and welfare recipients who produce too many. The blame for the country's ills is laid squarely on the shoulders of integration-shy immigrants who live on German unemployment benefits and occupy parallel societies where children, fundamentalism and violence flourish.

The German politicians and German society, moreover, stand meekly by, afraid to try to change the situation, driven and dominated by the "Gutmenschen" (do-gooders) a term used throughout the book for anyone whom Sarrazin rates as somehow stupid or naïve. The country, Sarrazin feels, is not listening to him, the lone voice in the wilderness. And it is going to rue the error of its ways.

Literature about the rise and fall of civilizations

The book thus belongs to the genre of literature of cultural decline, a genre that readers are attracted to because it is among the most deep-seated of the fears of those who dwell in affluent societies. This kind of literature has its historical precedents. The Roman historian Tacitus, for example, favourably compared the noble Germanic tribes people of simple purity to the decadent Romans. In the "Decline of the West" Oswald Spengler described what he saw as an inevitable process resulting from the rise and fall of civilizations. 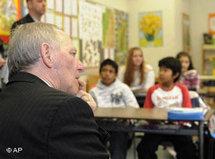 Is Germany "dumbing down", like Thilo Sarrazin suggests? - Former Minister of the Interior Wolfgang Schäuble in class with migrant children in Offenburg, Germany

​​Both Spengler and Tacitus saw themselves as misunderstood observers alerting society to the error of its ways, much as ecologist Herbert Gruhl did in the 1980s, or Kelek and Sarrazin today.

The literary quality of both Spengler and Tacitus consists in the melancholy with which they describe decline: something has been lost, become forever irretrievable; but nothing endures, that is the way of the world.

Sarrazin lacks this sense of melancholy and it is in this that his potential for aggression consists. He is not writing as a historical philosopher, but rather as a self-styled social engineer, a plumber for the leaky community. He is not short of proposals for solutions to the problem – sweaters rather than fuel allowances, calorie control rather than increasing basic welfare allowances, fines, deportation, welfare cuts – the plumber has his tools.
Alleged fecundity of Turks

In spite of its heavy reliance on statistics, the book is full of errors. On pages 359-360, following Sarrazin's long-winded contention that the fecundity of the Turks in child-bearing will soon turn the Germans into a minority in their own country, comes the most telling confession: "There is no scientifically reliable method for accurately predicting patterns of birth or immigration over a period of several decades." Yes, exactly, any demographer in Europe will tell you the same thing. But Sarrazin has chosen to base the previous 358 pages of his book on precisely that sort of prediction.

He makes no mention of the poor language skills of many Italians of the second and third generation – but then, of course, they are not Muslims. And he fails to mention that Germany is currently a country with more people leaving than coming in. Not even Sarrazin, the country's guardian of truth, the man who tells it like it is, wants to be that exhaustive in his research.

But this is not the problem. Every book contains errors. It is not even the disparity that exists between the enormity of the challenge (saving Germany) and the limitations of the prescribed solution (cutting welfare benefits). The problem is the attitude of the author, his pseudo objectivity, his gnostic faith in self-redemption. Halting the decline, it seems, is no more than a matter of pulling the right levers and pushing the right buttons.

Sarrazin ends his book, as he says, "in the words of a dead language" to challenge the politicians: "Hic Rhodus, hic salta!" It's an ending with a promise of salvation. It suggests that with a touch of firmness and a patent remedy or two things can be turned around. This is Sarrazin's version of do-gooding. It is the opposite of good.

END_OF_DOCUMENT_TOKEN_TO_BE_REPLACED
Social media
and networks
Subscribe to our
newsletter