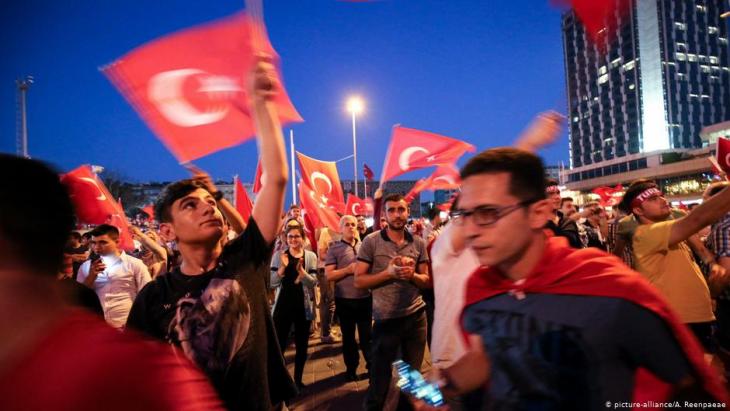 Three years after the failed coup, it's not victory fanfares sounding for Turkish President Recep Tayyip Erdogan, but alarm bells. Can Dündar, former editor-in-chief of the Turkish newspaper "Cumhuriyet", on the day that changed everything

On the night of the coup attempt on 15 July 2016, Turkish President Erdogan was on holiday with his family in Marmaris. As soon as he heard what was happening, he reacted at lightning speed, putting in a FaceTime call to the television broadcaster CNN Türk. In an improvised appeal, he called on people to take to the streets to block the rebels' path.

Turkey had already experienced three military coups, but an appeal such as this was unprecedented. On previous occasions, the incumbent presidents quietly ceded power. Erdogan's appeal was effective: people took to the streets beneath the deafening roar of fighter planes and stood in the path of the rebels' tanks. More than 300 people lost their lives on the night of the coup. But in the end, Turkey breathed a sigh of relief.

During the coup attempt, Erdogan was very nervous. When he boarded a plane from Marmaris to Istanbul, he was gripped by fear. He is said to have asked the pilots of the plane: "Please tell me truthfully which side you're on". When he landed, he had two possibilities: to either transform the democratic momentum of the coup into a national project or to seize the opportunity to build up a "one-man regime".

Erdogan responds with a counter-coup

He went for the second option. Upon landing at Istanbul airport, he described the coup attempt as a "gift from Allah" and explained: "The time has now come to purge our military."

A "purge". This word, uttered three hours after the crushing of the coup attempt, would shape all of Turkey in the ensuing three years. The "purge" affected not only supporters of the Gülen movement within the ranks of the military, but all opponents of Erdogan.

After a seven-hour cabinet meeting on 20 July 2016 – five days after the coup attempt – Erdogan initiated his counter-coup. In order to "eliminate the danger", a state of emergency was imposed for three months.

And that was just the first step towards a regime change. Erdogan assumed the responsibilities of the parliament, the government and even the judiciary and began setting up a regime that concentrated all power in the hands of just one person. He described the process as a "second war of liberation". Anyone taking a stand against him was regarded as the enemy. Supported by more than 30 decrees, he initiated a "purge".

More than 125,000 civil servants, police officers, teachers, judges, lawyers and academics were sacked; around 500,000 people were put on trial; 1,500 associations were dissolved, opposition media were censored and closed down and many journalists silenced. Thanks to the "gift from Allah", as Erdogan described the coup attempt, he was advancing towards total power.

Presenting himself as the "strong man"

Of course, the three-month state of emergency wasn't enough for Erdogan – he extended it no fewer than seven times. When his power hit an obstacle, he simply increased his power. In the spring of 2017, before the referendum on the constitution, it was his intention to create a climate of fear with a kind of "witch hunt" aimed at convincing the population to approve an authoritarian regime led by a "strong man".

But the AKP did not have enough clout in parliament. Erdogan took a fateful decision: he entered into an alliance with the ultra-nationalist right-wing extremist MHP. This alliance evoked the concept of the "Turkish-Islamic synthesis". On 16 April 2017, this union abolished the 100-year-old parliamentary government system and anchored a presidential system in the constitution. In June 2018, in early presidential and parliamentary elections, Erdogan was confirmed in office. 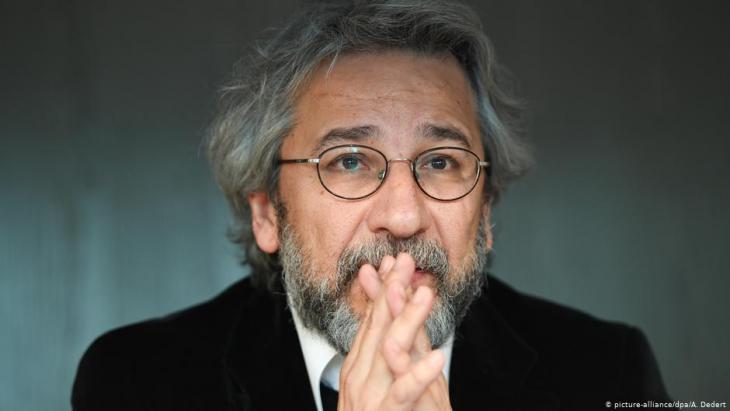 President Erdogan views Can Dündar (pictured here) as an enemy of the state. The former editor-in-chief of the Turkish newspaper "Cumhuriyet" has been living in exile in Germany for two years. A number of cases have been brought against him in Turkey

The polarising policies of the AKP and MHP resulted in the formation of a democratic front against Erdogan. In addition, Turkey slipped into economic crisis. The reason for this is the destruction of regulatory mechanisms within parliament, government and the judiciary, which led to mismanagement and corruption.

The Turkish President's manoeuvres got bogged down. The bureaucratic system, wholly dependent on the presidential palace, ground to a halt. The population's sense of insecurity grew.

Erdogan failed to install competent bureaucrats in his administration in the wake of the mass sackings as part of the "purges". Neither the police controls and surveillance, nor the appointment of his own son-in-law to the finance ministry, nor the mobilisation against Americans, Christians, Gülenists or Kurds achieved anything.

Early this year, Erdogan lost the local elections. He had to swallow major defeats in metropolitan centres such as Ankara and Istanbul – cities that had been under his control for a quarter of a century. While the opposition pooled forces, his party suffered a fracture. On the third anniversary of the coup, it's not victory fanfares that are sounding for Erdogan, but alarm bells.

Relations between Turkey and Russia are ambivalent. Moscow is nonetheless trying to prop up the leadership in Ankara. Elections are to be held in Turkey in June – and the last ... END_OF_DOCUMENT_TOKEN_TO_BE_REPLACED

All eyes in Turkey are on a court hearing scheduled for January 30 into a child abuse case that allegedly occurred with the knowledge of one of Istanbul's most powerful Islamic ... END_OF_DOCUMENT_TOKEN_TO_BE_REPLACED

Any reconciliation between Turkey and Syria’s Assad regime would have disastrous consequences for many Syrians, explains Syria expert Kristin Helberg END_OF_DOCUMENT_TOKEN_TO_BE_REPLACED

The poetry of Pir Sultan once prompted uprisings in the Ottoman Empire. To this day, Alevis identify with him. Rainer Hermann visited Mehmet Celebi, a direct descendant of the ... END_OF_DOCUMENT_TOKEN_TO_BE_REPLACED

There are signs of an imminent normalisation of relations between Turkey and Syria. This would allow Erdogan to score political points domestically before the upcoming elections ... END_OF_DOCUMENT_TOKEN_TO_BE_REPLACED

Turkey will mark the centenary of the proclamation of the Turkish republic in October. But 2023 will be an important year in another respect too: Turks will go to the polls in ... END_OF_DOCUMENT_TOKEN_TO_BE_REPLACED
Author:
Can Dündar
Date:
Mail:
Send via mail

END_OF_DOCUMENT_TOKEN_TO_BE_REPLACED
Social media
and networks
Subscribe to our
newsletter