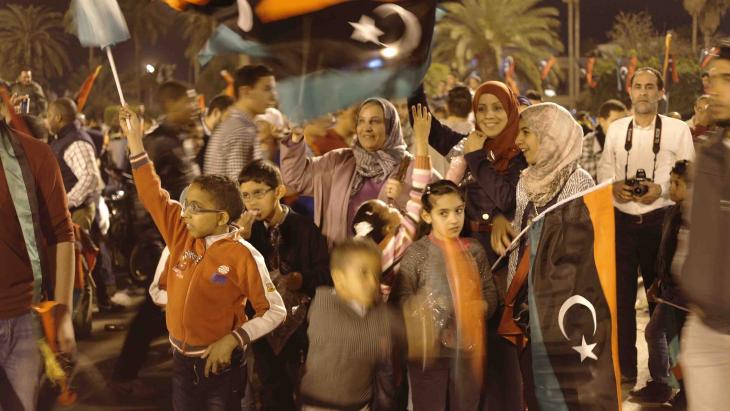 Third anniversary of the revolution in Libya
Nothing to celebrate

Three years have passed since the overthrow of Muammar al-Gaddafi. Yet despite celebrations to mark the event and the election of a 60-member national assembly to draw up Libya's new constitution, prospects for a more stable future look grim: the people have largely lost faith in the country's deeply divided parliament. By Valerie Stocker in Tripoli

The rebellion that toppled former leader Muammar al-Gaddafi and triggered the start of a democratic transition began three years ago. Yet many Libyans said they would stay away from this year's revolution anniversary celebrations because the country had nothing to celebrate.

Much of the initial enthusiasm that followed the revolution has waned. Militias continue to enjoy impunity, and the political roadmap drawn up in 2011 now hangs in the balance. For weeks now, demonstrators have been calling for the dissolution of a parliament whose deputies they accuse of incompetence and the abuse of power.

Nevertheless, the streets of Tripoli were decked out with national flags on 17 February. For several hours, crowds celebrated on Martyrs' Square, where a dazzling firework display lit up skies over the city. "In a few hours' time, the fun will be over and the worries will return," said one resigned spectator.

Coup against the "drunken democracy"

"I think we can describe Libya as a 'drunken democracy'. We don't know what's going on half the time and have constant headaches," tweeted Nada Elfeituri from Benghazi. The confusion and unpredictability of the Libyan domestic political situation was recently underlined by an incident that occurred just before the anniversary event. In a televised address, retired military commander Khalifa Haftar explained that parliament and government had lost all legitimacy and should be temporarily replaced by a presidential council to "correct the path of the Revolution". 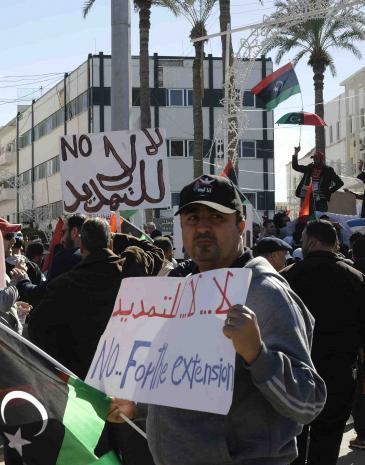 "No to the extension": For weeks, Libyans have been protesting against the extension of the mandate of the General National Congress and calling for new elections

"He may not have spelled it out in as many words, but his 'suggestion' was quite clearly understood as a coup," said Libyan Army spokesman Colonel Ali Scheikhi, who went on to say that Haftar was not speaking on behalf of the nation's official army, but on behalf of the "Libyan National Army", a group of renegade officers founded in Chad in 1987 with the aim of ousting Gaddafi. But the group has not held any sway for some time now, and there is little backing for it within Libya's actual armed forces, which are in any case weak. Jokes about the "coup without a military and without a state" are now doing the rounds in Libya.

But the situation is nevertheless serious, because the political crisis has now reached its lowest point. Within the parliament – the General National Congress, which was elected in 2012 – two cross-party camps face each other off: on the one side are the Islamists and revolutionaries, who are calling for more room for religion and greater influence for ex-rebels; on the other are the liberals and nationalists, who want to maintain the status quo and limit the influence of the Muslim Brotherhood.

The split began with the so-called "Isolation Law", which excludes former members of the regime from political life. It was introduced in early 2013 by revolutionary militias occupying the congress building. The conflict currently revolves around two things: firstly, the incumbent government, which the "Islamist Block" has been trying to depose for weeks, and secondly, the term of office of the General National Congress, an extension of which was agreed by a majority of deputies just before the expiration of the original mandate on 7 February.

However, Abdelmajid Meligta, leader of the liberal "National Forces Alliance" party, declared the move invalid and accused the opposing side of extortion. Party leaders had evidently hoped for a compromise agreement within which they would have voted for a change of government in exchange for a dilution of the Isolation Law. This would have given party founder Mahmoud Jibril – one of the few politicians who enjoys public support, but who is excluded because of his previous post within the Gaddafi regime – favourable prospects in any future presidential poll.

The split is not only endangering political stability, but also undermining social cohesion. The main reason for this is the entanglement of politics and armed forces, as both camps are making use of their militia alliances to exert pressure at state level.

No sooner had the rubbish left behind after the revolution anniversary celebrations been cleared away on 18 February, than the Qaqaa ('sabre-rattling') and Sawaiq ('thunderbolts') brigades provided the most recent example of this entanglement. Qaqaa Commander Othman Meligta said that "the General National Congress has been illegitimate since 7 February and must transfer power to the Supreme Court. Deputies who do not resign within five hours will be arrested." Like him, many members of these two brigades originate from the small but influential town of Zintan, which provides military backing for the liberal party. Inevitably, therefore, the threat was perceived as a strategic move by the liberals, in continuation of the "coup" declared four days earlier by Khalifa Haftar.

Protestations by the liberals that they had nothing to do with the threat were unconvincing, particularly as Abdelmajid and Othman Meligta are brothers. The extension of the five-hour ultimatum enhanced the impression that this was less a gaffe by renegade militia and more of a calculated play for power.

From the point of the view of the liberals, a crisis cabinet under the supervision of the Supreme Court would be welcome because it would temporarily put the opposition out of action. Forces from the port city of Misrata, which predominantly support the Islamist camp, promptly announced they would, if necessary, "defend parliament and democracy by armed force". 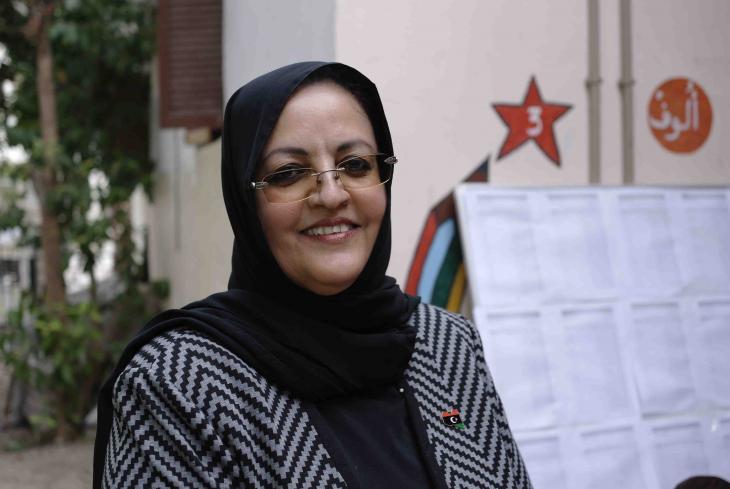 Asma Al-Usta, who is running for parliament in Constituency 10 in the capital, Tripoli, says that it is very hard for candidates to campaign without any state support, which in turn means that voters know little about the candidates and don't know whom to vote for

Observers warn that "if no agreement is reached, this will trigger a militia battle for Tripoli." The liberals still have one more trump card up their sleeve: the Supreme Court is currently considering a possible repeal of the Isolation Law.

Constitution caught in the crossfire

In the middle of all this, Libyans cast their votes on Thursday, 20 February 2014 to elect a constituent assembly. What is known as the "Committee of 60" is set to hammer out a constitution within four months, thereby setting out Libya's eventual form of government, among other things.

Because this is virtually impossible given the many conflicting domestic demands on the table, the incumbent government has already drawn up a Plan B that would see the election of a new transitional authority this summer which would be independent of the drafting of the constitution.

In response to sustained public pressure, Congress President Nuri Busahmain expressed his readiness to strike a compromise and pledged in his speech to mark the anniversary of the start of the revolution that new elections would "take place as soon as possible".

But critics say this isn't specific enough; they fear a continuation of the crisis and an intervention by political forces in the constitution-writing process in an attempt to secure and protect their own interests. Liberal leader Meligta claims the Islamists already have a complete draft text up their sleeves that they plan to impose upon the assembly.

The low turnout in the recent election – 12 per cent of those entitled to vote compared with more than 50 per cent in the 2012 presidential election – mirrors the frustration of the voters and the fact that they were ill prepared for the election, despite having to wait so long for it to take place. "I don't think I'll get enough votes," says Asma Al-Usta, candidate for Constituency 10 in the capital, Tripoli. "I wasn't able to run an appropriate electoral campaign without state support because media fees are high. Most of those voting today don't know whom to vote for," she says.

Voter Harun agrees: "The media have totally failed in their obligations," he says. Nevertheless, staying at home was not an option for him: "The political roadmap lacks all strategic vision, but that's exactly why this election is important. We have to make headway," he says. "Despite everything, I'm optimistic."

A ceasefire has been in effect in Libya for the past year and a half. Yet after Russia's attack on Ukraine, another proxy war looms in Africa's most oil-rich country. Mirco ... END_OF_DOCUMENT_TOKEN_TO_BE_REPLACED

Libya's first-ever skate park opened at the end of May in downtown Tripoli to the delight of local youngsters. Built on a site once used by former dictator Muammar Gaddafi's ... END_OF_DOCUMENT_TOKEN_TO_BE_REPLACED

United Arab Emirates strongman Sheikh Mohammed bin Zayed al-Nahyan, who was formally elected president on 14 May, has led a realignment of the Middle East, creating a new anti- ... END_OF_DOCUMENT_TOKEN_TO_BE_REPLACED

Russia's ranking on the World Press Freedom Index has fallen again over the Kremlin's wartime censorship of the Ukraine conflict. From Myanmar to Mexico, journalists continue to ... END_OF_DOCUMENT_TOKEN_TO_BE_REPLACED
Author:
Valerie Stocker
Date:
Mail:
Send via mail

END_OF_DOCUMENT_TOKEN_TO_BE_REPLACED
Social media
and networks
Subscribe to our
newsletter