Thousands gather at Hindu festival in India as virus surges 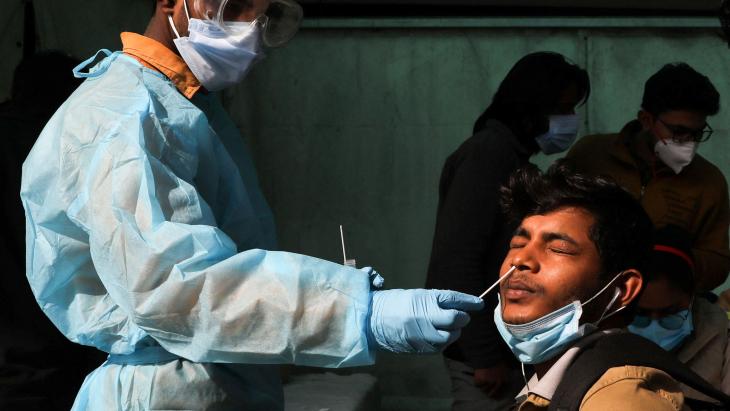 Tens of thousands of devout Hindus, led by heads of monasteries and ash-smeared ascetics, took a holy dip into the frigid waters of the Ganges River in northern India on Friday despite rising COVID-19 infections in the country.

Hindu pilgrims congregated at the Sangam, the confluence of three rivers – the Ganges, the Yamuna and the mythical Saraswati – in Prayagraj city, 200 km northeast of Lucknow, the state capital of Uttar Pradesh, to participate in the Magh Mela festival, one of the most sacred pilgrimages in Hinduism. They bathed in the Ganges waters, a ritual Hindus believe will wash away their sins and free them from the cycle of death and rebirth.

A similar gathering at a Hindu festival last year in the Himalayan town of Haridwar, in neighbouring Uttarakhand state, helped spread the delta variant that ravaged the country and made India one of the world's worst-hit countries. Epidemiologists described the festival as a "superspreader event".

Coronavirus infections, fuelled by the omicron variant, are rising fast throughout India. The country reported over 264,000 new infections on Friday but hospitalisations remain relatively low.

Millions of Hindus are expected to throng the festival for the next 47 days. Many of them will stay on the banks of the Ganges for a month leading the life of an ascetic, with the belief they will receive salvation. It has raised concerns that pilgrims could get infected and take the virus back to their cities and villages in other parts of the country.

Already, 77 policemen and 12 cleaning staff deployed for the event have tested positive for the virus.

"This is going to be a superspreader. The government should not allow a congregation of people in such a large number because religious congregations in the past two years were found responsible
for spreading the deadly virus all across the country,'' said Utkarsh Mishra, a lawyer who has filed a petition in the Allahabad High Court asking that the festival be cancelled.

Mishra said only locals and heads of important Hindu monasteries should be allowed to take part in the ritual.

Fearing a rise in infections, authorities in neighbouring Uttarakhand state have already banned a similar gathering.

Health experts earlier appealed for the festival to be cancelled in Uttar Pradesh state too, but the government went ahead saying safety rules would be followed.

Shesh Mani Pandey, a senior official in charge of the event, said only those who have taken two doses of the COVID-19 vaccines and have vaccination certificates would be allowed to join the ritualistic bathing. He said pilgrims will be allowed to enter the festival site after going through thermal scanning at the entry gates.

Critics of Prime Minister Narendra Modi and his Hindu-nationalist Bharatiya Janata Party say the festival has been allowed despite rising infections because the government isn't willing to anger
Hindus – they are the party's biggest supporters – ahead of crucial state elections in Uttar Pradesh.

The BJP-ruled state is holding polls on 10 February.    (AP)

END_OF_DOCUMENT_TOKEN_TO_BE_REPLACED
Social media
and networks
Subscribe to our
newsletter