One foreign freelance journalist has managed to enter the Tibetan crisis zone as a tourist. According to her observations, the protests are not just the result of major aggressions against Han Chinese on the part of Tibetans, but also of antipathy towards Muslims. By Nina Ritter 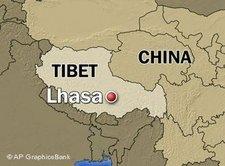 ​​Over the past week, demonstrations and violence have spread like wildfire from the Tibetan capital of Lhasa to Tibetan regions in the neighbouring provinces. Yet the aggression is not only directed at Han Chinese, who the Tibetans feel have colonised them.

There is a third party in the conflict that has so far gone mainly unnoticed: the local Muslim population. Conflict has been simmering between them and the Tibetans for centuries, and has repeatedly exploded into violence in the past few years – provoked by both sides.

Conflicts over water and land

"Let's go out to eat, but not to a Muslim restaurant," a Tibetan friend said when I visited her a few years ago in Lanzhou, the capital of Gansu province.

Tibetan students at the local minority university had launched a boycott of Muslim shops and restaurants, prompted by a knife fight between Tibetans and Muslims in a small town in Qinghai, where a Tibetan had been killed.

But the boycott went further than that. "We Tibetans should do our own thing. We should support Tibetan businesses," my friend summed up the students' slogans.

There were wild rumours going around among Tibetans, which many used to shore up the boycott: Muslim cooks mixed dirty dishwater into Tibetans' food or scattered the ashes of the dead into it to make Tibetans into Muslims, people were saying. No one stopped to think that Muslims don't cremate their dead but bury them.

There is usually an economic background to the tensions between Tibetans and Muslims. In numerous areas, mainly in the north of Qinghai and Gansu, on the edge of the Silk Road, the two groups are forced to live side by side under crowded conditions. There are frequent arguments over water and fertile land, both scarce resources in this barren region.

A Tibetan student in Xining complains about the situation in his home region: "The Muslims have grabbed the good land in the valley and pushed us further and further back into the mountains."

The people in his village draw their water from a narrow stream. The village is in Xunhua, a region of Qinghai designated by the government as an autonomous county of the Muslim Salar ethnic group. Another Tibetan from the area claims: "The Muslims dominate the economy and administration. They give each other all the best jobs. There's nothing left for us Tibetans."

Other Tibetans maintain that Muslims control the region's entire trade, and are often corrupt. "When my brother wanted to sell some sheep," a young Tibetan from a nomad family says, "a couple of Hui Muslims took the animals away with them and said they’d pay half the price later. My brother never got the money, of course."

"Some people may take advantage if Tibetans are inexperienced in trading," a Muslim Salar professor from Xining rebukes the claims, "but that's an exception to the rule."

The fact that Muslims dominate trade in the region to the present day is partly down to the Tibetans themselves. Traditionally, they were almost exclusively nomads and farmers – and still are for the most part. Over the past centuries, local Muslims occupied positions that the Tibetans saw as low in status or impure – including as slaughterers, tradesmen and merchants.

​​The Muslims established themselves as businessmen down the generations, and when private enterprise was legalised again under the new policy after the end of China's collectivisation phase, they benefited from their far-reaching networks and were vastly superior to the Tibetans in terms of business acumen.

The boycotts, starting in 2003, were an attempt to drive Muslim businesses out of Tibetan areas, and even succeeded in some cases. Shop windows of several restaurants in Mangra (Guinan) in the Qinghai province, which had previously been owned by Muslims, suddenly bore the legend: "Tibetan noodle soup, Tibetan bread" – although they were usually the exact same dishes that the Muslim owners had sold before the boycott.

A young Tibetan in jeans and sneakers covertly admitted at the time that the Muslims had been better cooks. But he quickly added: "But we Tibetans should still eat at our own restaurants."

Asking Muslims from the region what they think of their neighbours reveals a cliché of ignorant and uncouth Tibetans. They have a particularly bad image in nomad regions, where bored young men like to leave the grasslands behind for the local towns to get drunk and start fights.

A Muslim taxi driver from Gansu comments on the current riots: "The Tibetans have freaked out." Around 40 with a friendly round face and the traditional white cap identifying him as a Chinese Muslim, he grins and makes a few deprecating remarks about Tibetans.

But then he pauses for a moment and adds with a serious expression: "In Xiahe they set the mosque on fire and in Lhasa too; that's going too far."

The Chinese authorities have done little to solve such ethnic conflicts. According to the official version, there is a harmonious relationship between the ethnic groups in multiracial China – at least that's the ideal propagated by the central government in Beijing.

Ethnic-based conflicts are often swept under the carpet. And on the local level, those with money and power are usually only concerned with feathering their own nests, whether they are Muslims, Han Chinese or Tibetans.

In the past, the local law enforcers quickly put a lid onto the sporadically exploding scuffles – at least temporarily. But now, with violence flaming up in many parts of the Tibetan region and affecting all three of the area's major ethnic groups, and with entire swathes of land controlled by the military, the situation has become more complicated.

If things calm down, however, the Chinese government would be well advised to review its idealistic view of imposed ethnic harmony, in which conflicts are simply swept under the carpet.

Portrait Rebiya Kadir
Fighting for the Uighurs' Rights
The global war against terrorism provides China with a pretext to persecute its own Muslim population. Human rights activist Rebiya Kadir speaks out about the situation of roughly eight million Uighurs in northwestern China. Tobias Grote-Beverborg reports

Islam in China
Ethnic Powder Keg in Henan Province
The reasons for the tensions between China's ethnic majority, the Han, and the Hui minority remain unclear. But an ethnic conflict has been brewing under the surface for some time. By Kerstin Winter

END_OF_DOCUMENT_TOKEN_TO_BE_REPLACED
Social media
and networks
Subscribe to our
newsletter