Ninjas in Chadors, Hip-Hop in Farsi

Transit Tehran, a diverse anthology of images and texts, proves that there is much more to Iran than the image portrayed by the media leads us to believe. Angela Schader reports

​​For culture vultures, it borders on the banal to say that Iran deserves attention for a number of things that have nothing to do with nuclear programmes or a head of state who regularly tends towards the embarrassing.

High-profile filmmakers, a vibrant modern literary scene that has produced works as diverse as Sadegh Hedayat's fascinating yet puzzling The Blind Owl and Mahmoud Doulatabadi's rural epic Kelidar, a society that is charged with conflict and is attached on the one hand to the Shia martyr cult, yet has on the other produced one of the world's most lively blogger communities, photographers and visual artists that are long since names on the international scene … all of this shapes the face of this fascinating nation.

Anyone who would like to gain a first insight into this country would do well to get their hands on Transit Tehran, a diverse anthology of images and texts.

The loosely structured sequence of texts begins with a potted history of Tehran. Women play a dominant role in the section that follows, the evidence of Iranian "girl power" ranging from beauties with cigarettes between their lips and headscarves balancing precariously on the backs of their heads and women police officers armed with pistols and dressed in chadors to women football fans obstinately fighting for their right to enter the stadium. 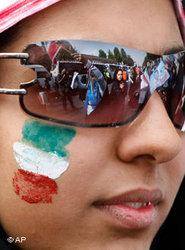 ​​Along the way, the reader learns more about the Persian hip-hop scene while an essay and a striking photo series are dedicated to the extremely political, religiously motivated martyr cult.

In the second half of the book, urban and social issues alternate, whereby the scope of the range of issues covered is highlighted by provocative contrasts. For example, a report about an Islamic school for women is immediately followed by a series of photographs of prostitutes that were taken before the Islamic Revolution.

A similar strategy was applied in the section on the visual arts, where a bombastic work of art by the folk artist Khosrow Hassanzadeh that does not always correctly reproduce human proportions is followed by a controversial work by the exiled artist Nicky Nodjoumy. Not surprisingly, the best visual art in the book comes from the pen of the caricaturist Ardeshir Mohassess, who was active during the reign of the Shah and has also been living in exile since 1976. None other than the internationally renowned artist Shirin Neshat has praised his work as a "gift from heaven".

Respect for the "other side" 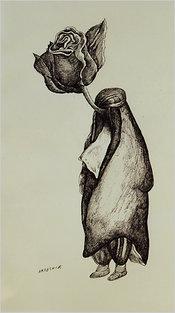 A "gift from heaven": the best visual art in the book comes from the pen of the caricaturist Ardeshir Mohassess (1938-2008), who has been living in exile in New York since 1976

​​The editors of the anthology undoubtedly belong to the progressive, critical camp, which is all the more reason to admire them for the respect they show the religious world, for example by giving a photographer the opportunity to provide an insight into the private life of a religious scholar. The image of the master relaxing among his students in a very human, not the least photogenic pose, surrounded by the gently smiling faces of young men, opens a window on a largely unknown aspect of Iranian religion, which has been discredited wholesale by the West.

While the only disappointing images in the book are the sequences of film stills that are unsuitable for such a static presentation, the quality of the reports and literary texts is not consistently high.

The essay about the Naziabad district, for example, is a bald and barren list of institutions and names that is too dull even for the most enthusiastic reader; a picture by Nodjoumy (all other artists are represented by several works) is accompanied by a rather inconsequential little essay; and of the four short stories in the book, the most impressive is Alireza Mahmoodi-Iranmehr's macabre study of the Gulf War, which is told from the perspective of a corpse.

Be that as it may, this volume certainly suffices as a first, imaginary, colourful carpet ride to Tehran in book form.

END_OF_DOCUMENT_TOKEN_TO_BE_REPLACED
Social media
and networks
Subscribe to our
newsletter