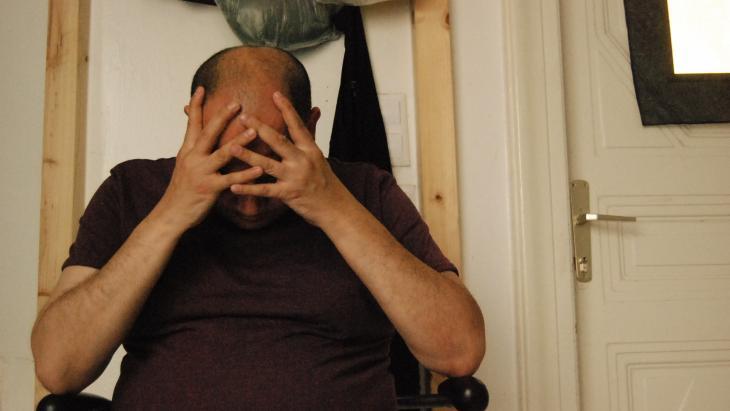 Trauma therapy for victims of violence in Arab countries
Tortured, humiliated and voiceless

Traumatised victims of violence and war in Arab countries are now finding psychological help in Germany. The unusual thing about the therapy is that their therapists never see their faces; sessions take place anonymously over the Internet. By Iris Mostegel

The female therapist asks the man to describe what he experienced in detail. He can't. She waits. At some point he answers her: "It was so horrible that I can't find the words to describe it."

To this day, Nadine Weissflog*, the 26-year-old therapist at the Berlin Center for the Treatment of Torture Victims (bzfo), has no idea who the man is. She doesn't know what his job is or what he looks like. She doesn't know why he was locked up for weeks on end, naked, in a cell so narrow that he could only sleep standing up. Nor does she know why, day after day, he was led blindfolded into a room where he was tortured.

All the man reveals about himself is his home country and his age: Libya, 38 years old. There, some 2,000 kilometres from the Berlin Center for the Treatment of Torture Victims, he sits at home at his computer and communicates with the therapist via Internet. He needs her help. He can no longer cope with his post-traumatic stress disorder alone.

He read in an online forum about the Internet-based therapy in Arabic that the bzfo has been providing for people like him since 2009. The service is known by the Arabic word as "Ilajnafsy" (psychotherapy).

Today, psychologist Nadine Weissflog, who is half-Iraqi, is in the office in Berlin-Moabit. She sits in front of an Apple notebook; behind her colourful notes are pinned up on an oversized pin board, in the corner stands a yucca tree. Her colleagues, 32-year-old Ziad Musa*, a Syrian Kurd, and the co-ordinator of the "Ilajnafsy" programme, Sophie Schaarschmidt, are also present.

Torture, experiences of war and expulsion, often sexual abuse by family members, or depression that can't be traced to a specific trauma: these are the problems that compel women and men from countries across the Arab world to consult the team of five psychologists in Germany. They consciously chose this German service because in many of their home countries, there is no such support available. And if it does exist, the threshold for asking for psychological help is high – on the one hand because of the social stigma attached, and on the other because of the shame associated with talking to a stranger face-to-face about personal traumatic experiences. 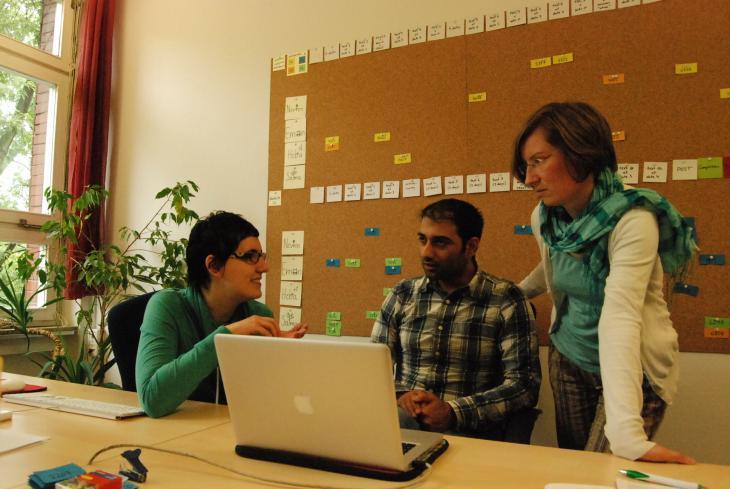 The five therapists working at the Berlin Center for the Treatment of Torture Victims (bzfo) treat 20 patients a month free of charge. Help is available to anyone in the Arab world with an Internet connection. In fact, the demand is so great that the centre recently set up a branch office in Egypt

Nadine Weissflog explains that the lack of direct personal contact with the attending therapist and the anonymity of the Internet help victims to open up. The five psychologists are well acquainted with the cultural background of their clients because they too are all originally from Arab countries.

The Syrian psychologist Ziad Musa says that the centre is treating 20 patients a month free of charge and that help is available to anyone with Internet access. The demand is so great that the centre recently set up a branch office in Alexandria (Egypt).

2,000 kilometres away in Libya, the 38-year-old man sits at his computer. Using an encrypted account, he has logged in from home onto the external e-mail system of the bzfo in Berlin; the aim is that no third party can read what he is writing. Using this e-mail system, the man will communicate with Nadine Weissflog over the coming eight weeks.

The therapy has begun. From now on, the man will receive a message from his therapist at least twice a week. She will set him a task and he will write a text about it. She will then give him feedback and send instructions for the next texts. During this time, the man will not tell her about the reason for his imprisonment or who tortured him. Moreover, the therapy concept stipulates that Weissflog is not allowed to ask. The only thing that she asks of him is to write down everything about his traumatic experiences: How was he tortured? How was he verbally humiliated? How often and for how long?

When he began therapy, the man's traumatic experience was already two or three years in the past. After he was released from prison, he just waited. Perhaps he was hoping that everything would somehow just right itself. But the trauma remained. He felt paralysed and empty; he saw himself as a worthless non-person. This is how he described it later to his therapist, probably not realising that many of her other patients used very similar words to describe their state of mind.

Men from Syria who were raped in prison, women from Saudi Arabia who have been physically abused and battered – those who seek help have undergone diverse forms of trauma, but the aftermath is usually the same: agonising flashbacks, emotional numbness and a general retreat from public life. These are just a few of the symptoms that are grouped under the term "post-traumatic stress disorder". Sometimes, the effects don't become apparent until months or even years after the traumatic experience.

Nadine Weissflog pounds on the light-coloured conference table with her fist. "Rage!" she says. "In this work, you develop such a rage against the systems in which these people live. But as a therapist, you are powerless. You are, after all, dealing with an individual and not the system." 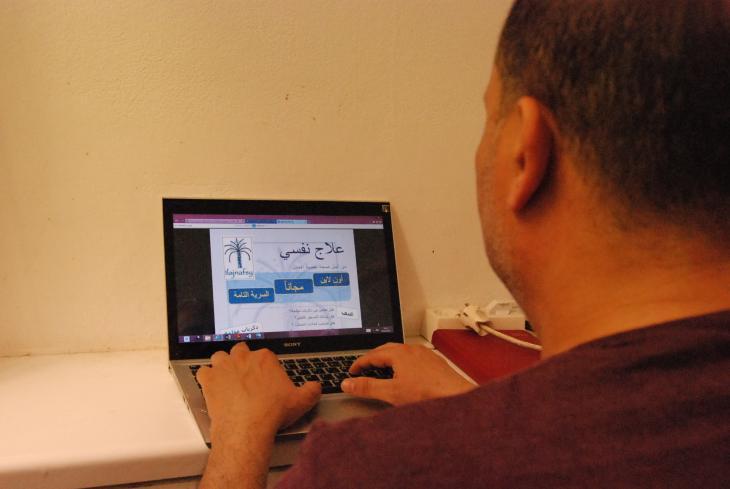 In order to ensure their anonymity and to protect their identities, the people suffering from trauma use an encrypted account to communicate with their therapists

Weissflog adjusts her black horn-rimmed glasses. Four years ago, she says, when she began working here, she learned for the first time about the concept of cognitive behavioural writing therapy using the Internet, also known as "Interapy". As a rule, therapist and patient communicate by e-mail for a period no longer than eight weeks. The therapist suggests a theme on which the patient then writes a longish text within the next 50 minutes. The next task is based on this text; the therapy thus proceeds using a three-stage model.

But can therapy over the Internet that only lasts a few weeks really help severely traumatised people who are thousands of kilometres away? Defying all sceptics, the programme has in fact achieved demonstrable success – particularly in cases of post-traumatic stress disorder.

A 2013 study conducted by the University of Zurich directly compared online therapy and conventional psychotherapy. The results showed that the so-called "effect size", in other words, the effectiveness of the therapy, is nearly the same. People in the Netherlands have long been convinced of the usefulness of this Internet writing therapy, the cost of which has been covered by health insurance companies there since 2005.

And yet, virtual therapy does have its limits. In cases of acute suicidal thoughts or severe depression, the Internet is certainly not a comprehensive option; in such cases, face-to-face therapy is a must.

A few weeks before the start of the course of trauma therapy, Nadine Weissflog evaluated a questionnaire the 38-year-old Libyan had returned to her by e-mail a few hours before. As with all other patients, she determined the patient's degree of traumatisation using the Post-Traumatic Stress Diagnostic Scale prior to the start of the therapy.

Upon conclusion of the therapy, she does another assessment: to what extent has the patient's condition improved? On average, trauma victims' symptoms are alleviated by half, the two psychologists report. Sometimes less, sometimes even more, as in the case of the 38-year-old Libyan. "His scores have improved by 80 per cent compared with the beginning of the therapy," says Nadine Weissflog with a smile, "those are the really good moments."

* The psychologists interviewed requested that their names be changed.

Home
Print
Newsletter
More on this topic
Health and immigration in Germany: Language barriers to psychotherapy for immigrantsSyrian refugee children: A lost generation in the makingWebsite of the Ilajnafsy service
Related Topics
Human rights, Humanitarian aid
All Topics

Giessen, Eichsfeld, Kusel, Berlin – cars bearing old German number plates are the latest trend on the streets of Cairo. Many Egyptians regard the discarded plates as chic. What ... END_OF_DOCUMENT_TOKEN_TO_BE_REPLACED

Tunisia has been going through a severe economic and political crisis in recent years. More than one in three young people there are unemployed. For many skilled, qualified and ... END_OF_DOCUMENT_TOKEN_TO_BE_REPLACED

German imams have publicly expressed their solidarity with the women of Afghanistan. In a letter of protest, the clerics say that the Taliban regime's decree barring women from ... END_OF_DOCUMENT_TOKEN_TO_BE_REPLACED

At the end of every year, the team at Qantara.de gives you a run-down of the ten most-read articles on the site over the past 12 months. Here is a quick overview of the stories ... END_OF_DOCUMENT_TOKEN_TO_BE_REPLACED

Social engagement is often motivated by religious factors. A new book explores the background to these community efforts and appraises how effective they are in helping to ... END_OF_DOCUMENT_TOKEN_TO_BE_REPLACED

The government in the Netherlands, one of the last European nations to abolish slavery, has made an historic apology. But some feel that there is still a long way to go. By Ella ... END_OF_DOCUMENT_TOKEN_TO_BE_REPLACED
Author:
Iris Mostegel
Date:
Mail:
Send via mail

END_OF_DOCUMENT_TOKEN_TO_BE_REPLACED
Social media
and networks
Subscribe to our
newsletter