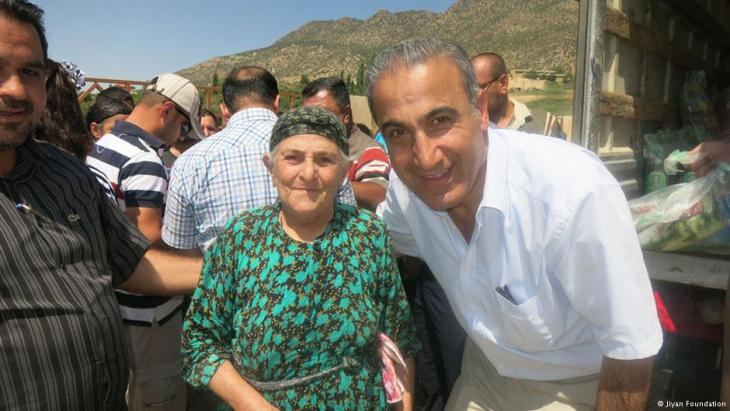 Iraq′s autonomous region of Kurdistan is home to approximately 2 million refugees from various backgrounds and religions. Since 2005, the Jiyan Foundation for Human Rights has been providing medical, psychotherapeutic and social support to survivors of torture, persecution and violence. Katja Dombrowski discussed matters with Salah Ahmad, the Foundation′s founder and president

The Jiyan Foundation helps refugees and victims of violence in Kurdish northern Iraq. What refugee groups have come to your region?

Salah Ahmad: Kurdistan has taken in many people who have experienced persecution in southern and central Iraq. They include many Sunnis and Christians, for instance from Baghdad or Basra, refugees from Mosul, which IS controls – and of course a large number of Syrians. We also have refugees from Iran and Turkey, specifically Kurds and dissidents. Kurdistan is the only safe area in the region and the Kurds have done their best to accommodate these people.

How many refugees are there?

Ahmad: Officially there are 1.8 million refugees in Kurdistan, though some say that we have over 2 million – with a population of around 5 million. This influx has obviously overwhelmed the Kurdish government. Kurdistan is fighting a war with IS. It is also experiencing serious financial difficulties, which are being exacerbated by low oil prices. The UN is playing a large role in caring for the refugees and so are organisations like ours.

When did the refugees arrive in Iraqi Kurdistan and why were they forced to leave their homes?

Ahmad: Until 2003, Iraq was ruled by a dictatorial regime that was controlled by the Baath party. The Baathists destroyed everything in sight, including their own people. The Americans then committed the serious error of liberating the country without appointing a head of state. The result was gang warfare between armed groups and a wave of terror that has still not ebbed away. In 2006 and 2007 alone, 150,000 to 170,000 civilians were killed. Nouri al-Maliki, the former prime minister, wanted to crush the Sunnis. That′s why there are so many Arab refugees in Kurdistan. 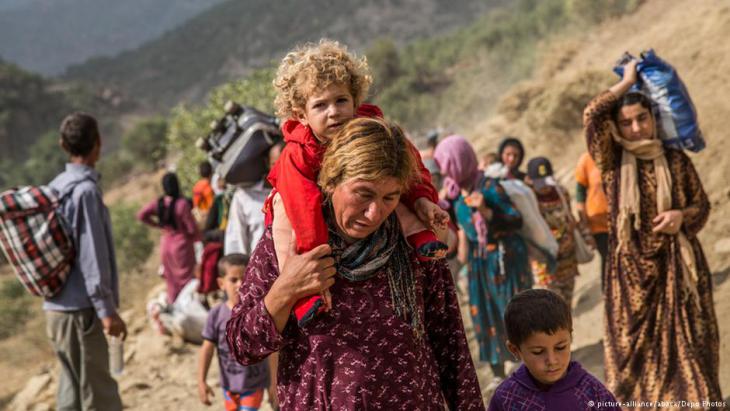 Estimates put the global number of Yazidis at around 700,000 people, with the vast majority of them concentrated in northern Iraq, in and around Sinjar. Facing brutal IS persecution in 2014, roughly 130,000 residents of Sinjar fled either to Dohuk, in Iraqi Kurdistan to the north, or to Irbil

Then came the IS terrorist militia. Thousands had to flee from Mosul and the surrounding area: Yazidis, Shabaks, Kakai, Christians and even Muslims. There are 14 or 15 religious groups who have lived in that region for thousands of years.

The fate of the Yazidis in particular got a lot of attention in Western media. Why was that?

Ahmad: The Yazidis have a history of being persecuted and are worst affected by IS′s attempted genocide. IS militants captured the Yazidi city of Sinjar as well as numerous villages, decapitated many people and abducted a large number of women. That was a traumatic experience.

What are living conditions like for refugees in Iraqi Kurdistan?

Ahmad: The camps are well equipped. The UNHCR provides food, electricity and water, while organisations like the Jiyan Foundation offer medical and psychological care. Over 90 % of children go to school either inside or outside the camps. Refugees are also allowed to work. At the moment, however, it is very cold. We don′t have enough heaters and people are freezing in their tents.

Do some refugees live outside the camps?

Ahmad: Yes, those people who are doing well enough financially can rent a house. They make up maybe 10 to 15 % of refugees and tend to be Iraqi Arab. The Syrians are also very well integrated. They work hard and don′t have a language barrier to overcome; most Syrians in Iraq are Kurds who speak the same dialect as we do. Many have found jobs.

Which refugee groups does the Jiyan Foundation focus on?

Ahmad: We work with everyone – the Jiyan Foundation doesn′t take background or religion into account. Anyone who needs help is welcome and all the services we offer are free. The Jiyan Foundation operates nine trauma centres and is currently building a therapeutic garden for women and children who were victims of violence and need a place to find peace. We have 145 employees in Kurdistan, including psychologists, psychotherapists, psychiatrists, physicians, social workers and physical therapists.

Are you the only organisation offering trauma therapy in the region?

Ahmad: No, there are several others. But we have been here for 10 years and have grown our organisation systematically. I opened the first Centre for Trauma Therapy in Kirkuk in 2005; I had to spend 15 months on site. Then we were asked if we could set up two more centres in Erbil and Sulaymaniyah. Now we have nine. We also train therapists. Twenty of our employees recently completed training to become trauma therapists.

How are all of these activities financed?

Ahmad: The Jiyan Foundation depends on international funding and donations. The most important donors include Germany′s federal government, the EU, the UN and faith-based organisations like Misereor. We also co-operate closely with the Berlin Centre for the Treatment of Torture Victims, where I myself have worked for many years. The Centre supports us through professional exchange, joint projects and German infrastructure.

What does your work with refugees look like in practice?

Ahmad: We offer therapies for different target groups, for instance minorities, women and girls and children and youth. In order to provide our services, we travel not only to refugee camps, but also to women′s shelters, prisons and orphanages. Our mobile teams travel to remote regions that don′t otherwise have access to psychological care. Our goal is to provide people with the support they need to once again live normal lives. In therapy sessions, for instance, we tell people that they won′t achieve anything through hatred or a desire for revenge. Victims feel these emotions very acutely. After all, many have experienced severe injustices. 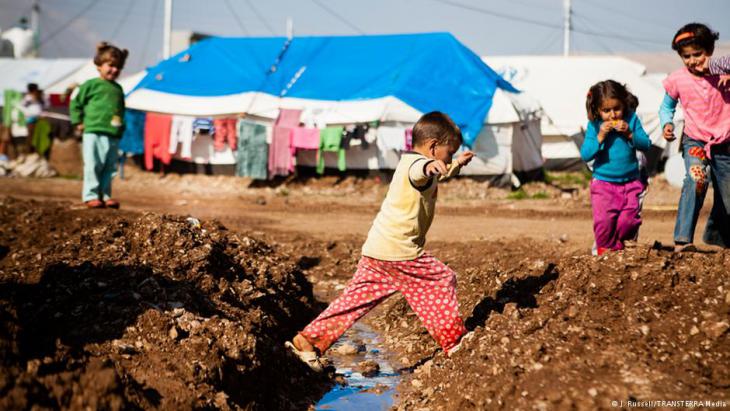 Glimmer of hope: "IS is being beaten back. The refugees hope that they will be able to return home. They feel they have prospects for their future... people are getting married and having children in the camps," says Salah

We go into schools and make it clear to young people that there boys and girls are equal – we try to communicate an understanding of equal rights. There is a lot of violence in the schools, so we must show teachers how to deal with difficult children. We work with parents as well to help them understand why their child is behaving this way. This programme has been so successful that we have a waiting list for schools. Some parents have also become our patients because they recognise that we are able to help them. Everything we do is aimed at creating a peaceful society.

Is that possible at all while IS is carrying out violence, expulsion and repression in northern Iraq?

Ahmad: I think it is, as long as we don′t give up. Of course, things are very difficult, but we are becoming more hopeful every day. IS is being beaten back and some areas have already been recaptured. The refugees hope that they will be able to return home. You can sense that they feel they have prospects for their future, which is also evident in the fact that people are getting married and having children in the camps. Thanks to therapy and trauma work, relationships within families have significantly improved. Families whose interactions were previously dominated by violence and conflict now live peacefully together.

You work with people from a variety of different religions, many of whom were persecuted because of their beliefs. What role does religion play in your work?

Ahmad: In our work, all members of all faiths operate as one team. I have never asked someone 7what religion he or she belongs to. It does not matter. We all have the same right to live here. When we work with our target groups, we also bring different religions together. Some groups are made up of three nationalities and religions. And people really benefit from that arrangement! Of course, we address religious repression and spell out, for instance, that IS does not represent the true Islam.

You yourself are Kurdish, come from Kirkuk and have experienced persecution and displacement. Was that why you decided to work with refugees?

Ahmad: I was politically active during the reign of Saddam Hussein and had to leave the country in 1981. As a refugee, I ended up in Germany, where I found asylum. I know the psychological traumas that many victims of torture experience. After I became a psychotherapist, I was able to help hundreds of people. Following the overthrow of Saddam Hussein, I saw an opportunity to help people in Kurdistan. We filed applications for funding, until we finally got support from the US State Department. I very much hope that we can continue our work for several years to come. Only through peace work, which we are performing alongside our therapeutic services, is it possible to build a peaceful, democratic society.

Salah Ahmad is a psychotherapist and the founder and president of the Jiyan Foundation. He lives in Germany and the autonomous region of Kurdistan in northern Iraq. In recognition of his work, he was presented with the Order of Merit of the Federal Republic of Germany in 2015.

Home
Print
Newsletter
More on this topic
Iraqi Kurdistan in political and economic crisis: Barzani′s sinking shipYazidis and Kurds in Iraq Are we arming the right people?The culture and faith of the Yazidis: Demonised and eternally misunderstoodThe Jiyan Foundation website
Related Topics
'Islamic State' | IS, Minorities in the Muslim world, Muslim minorities, Yazidi
All Topics

Any reconciliation between Turkey and Syria’s Assad regime would have disastrous consequences for many Syrians, explains Syria expert Kristin Helberg END_OF_DOCUMENT_TOKEN_TO_BE_REPLACED

Iraq bears the scars of decades of conflict and has seen its antiquities plundered, yet the House of Manuscripts' collection has managed to survive END_OF_DOCUMENT_TOKEN_TO_BE_REPLACED

As Syrian camps housing families of Islamic State fighters get more dangerous, there are calls to bring children out, even if the mothers don't want to go. The idea of separating ... END_OF_DOCUMENT_TOKEN_TO_BE_REPLACED

Morocco has taken the 2022 World Cup by storm, with the northwest Africans reaching the semi-finals for the first time in their soccer history. As the knockout match approaches, ... END_OF_DOCUMENT_TOKEN_TO_BE_REPLACED

The Islamic Republic has been unable to quell the civil unrest that erupted three months ago, after Mahsa Amini died after being detained for violating hijab rules. Now the ... END_OF_DOCUMENT_TOKEN_TO_BE_REPLACED

The Kurds are under attack from two sides: from Turkey, and from Iran. The situation in their territories in northern Iraq is becoming increasingly desperate. Birgit Svensson ... END_OF_DOCUMENT_TOKEN_TO_BE_REPLACED
Author:
Katja Dombrowski
Date:
Mail:
Send via mail

END_OF_DOCUMENT_TOKEN_TO_BE_REPLACED
Social media
and networks
Subscribe to our
newsletter