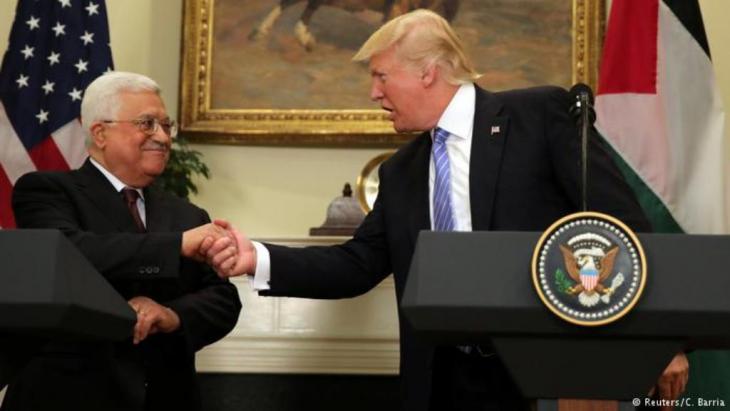 Since Trump′s inauguration there has been plenty of contact between the White House and stakeholders in the Middle East. Achieving the ′big ultimate deal′, however, will take more than cosy platitudes. Commentary by Alaa Tartir

In his opening remarks at his Washington press conference with Mahmoud Abbas, Donald Trump praised the Palestinian president for courageously signing the Declaration of Principles (DoP) – the official name for the Oslo Agreement – on the lawn of the White House 24 years ago.

According to Trump, the DoP ″laid the foundation for peace between the Israelis and Palestinians.″ Equally important, he told Abbas ″you signed your name to the first Israeli-Palestinian peace agreement.″ Trump supported Abbas for ″being the Palestinian leader who signs his name to the final and most important peace agreement that brings safety, stability and prosperity to both peoples and to the region.″

This was music to Abbas′s ears, who has been wishing for such recognition for a long time. Abbas has long complained about not receiving sufficient recognition for his historical role in signing that ″very important″ document, as all the credit went to the late PLO leader Yasser Arafat, including the Nobel Prize.

Undoubtedly, Trump′s opening remarks boosted Abbas′ ego at a time when he suffers a deep legitimacy crisis at home, criticised by the Palestinian people for leading the Palestinian polity into authoritarianism – mainly through sub-contracting repression – and for solidifying the foundation of a Palestinian police state under Israeli military occupation. 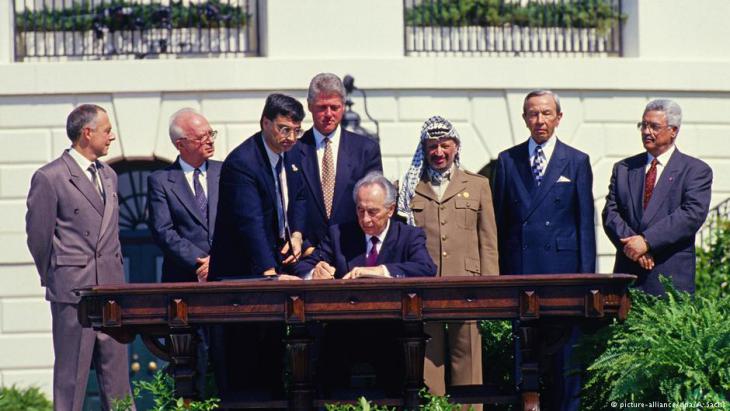 Dishonest brokers for peace: "the celebrated Oslo accord was merely a security arrangement between the colonised and coloniser to secure the latter, which is very far from being a peace agreement, to the detriment of the livelihood of the Palestinian people. Its failure has enabled Israel to consolidate its apartheid policies, practices and structures," writes Tartir

Yet Trump′s apparent warm reception reportedly worried and confused the Israelis. In turn, Abbas reciprocated this ″Trumpism″ of narrative and celebration of egos by telling Trump, ″Now, Mr President, with you we have hope.″ Earlier in his remarks, Abbas told Trump, ″your courageous stewardship and your wisdom, as well as your great negotiating ability″ will essentially bring about peace.

This glowing rhetoric, hypocrisy and egotism blocked the eyes and minds of the two presidents from acknowledging the stark failure of the DoP to bring about prosperity and security to both sides, the Palestinians and Israelis.

In fact, that Oslo accord has allowed Israel to expand its illegal Jewish settlements in the occupied West Bank and Jerusalem and to continue its colonisation of Palestinian lands. The failure of that celebrated DoP and its framework meant that Israel entrenched its apartheid policies, practices and structures.

In essence, that DoP was merely a security arrangement between the colonised and coloniser to secure the latter, which is very far from being a peace agreement, to the detriment of the livelihood of the Palestinian people. 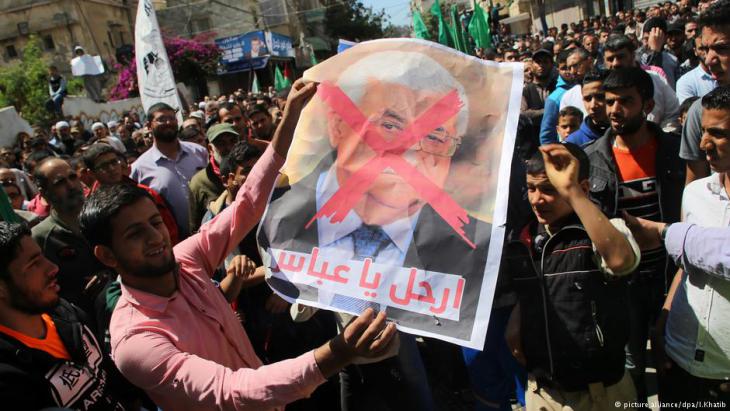 Music to Abbas′s ears: "undoubtedly, Trump′s opening remarks boosted Abbas′ ego at a time when he is suffering a deep legitimacy crisis at home, criticised by the Palestinian people for leading the Palestinian polity into authoritarianism – mainly through sub-contracting repression – and for solidifying the foundation of a Palestinian police state under Israeli military occupation," observes Tartir

The conditionality of security arrangements and counter-terrorism were at the core of Trump′s remarks, which is in line with the Israeli demands and the donor-imposed Palestinian Authority (PA) security doctrine.

Trump stated clearly, ″we must continue to build our partnership with the Palestinian security forces to counter and defeat terrorism.″ Trump added, ″They [Palestinian and Israeli security establishments] get along unbelievably well… They work together beautifully″ – a statement that outraged many Palestinians.Unsurprisingly, Abbas nodded his head in agreement throughout the press conference as he views security co-ordination as a ″Palestinian national interest″ and as a ″sacred″ doctrine.

However, in reality, this translates to a partnership that aims to criminalise Palestinian resistance against the Israeli occupation. It's a partnership that aims to empower the dominance of the PA security establishment and forces, positioning them as repressive bodies presiding over the Palestinian people and their struggle for self-determination.

This partnership further manifests itself through the sponsorship of the authoritarian transformations that have accompanied the Palestinian state-building project, in particular over the last decade.

But neither Abbas nor Trump care enough about the aspirations and demands of the Palestinian people. Both presidents fail to understand that, first and foremost, a lasting and meaningful peace agreement is not possible without the approval and endorsement of the people. Achieving peace, contrary to what Trump and Abbas claim, is more complex than a merely signing ″a document″. 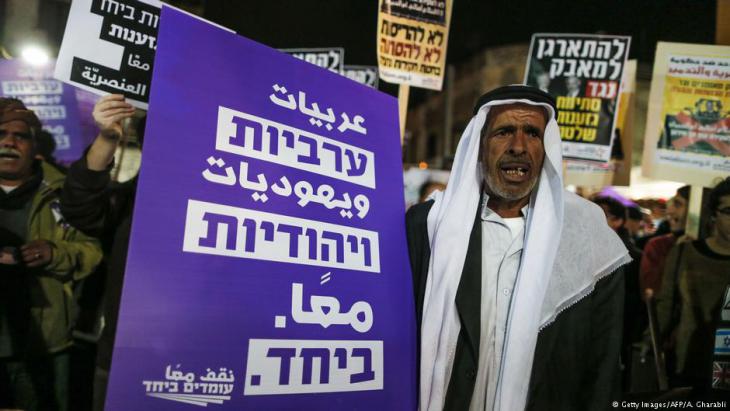 Past masters at keeping the Palestinians in check: Israel approves less than two percent of all requests for building permits submitted by Palestinians. Any homes and shops that lack one are simply razed to the ground. Lately, despite the practice being labelled a war crime, the number of punitive demolitions – destroying the family homes of suspected Palestinian attackers – has also increased

Like most previous US administrations, Trump understands the ″big ultimate deal″ mainly through security and economic lenses. Accordingly, he is reinforcing a well-trodden path and failed paradigm of securitised peace and an economic peace approach.

Even a brief examination of the former US secretary of state John Kerry′s Palestine Economic Initiative (PEI) provides plenty of examples and lessons on why ″new economic opportunities″, as dictated by the US and within its framework and understanding of peace and ″big deal″ approach, will not lead to peace. In fact, the exact opposite is true: it sustains and entrenches a status quo that denies basic human rights, equality and freedom.

Trump concluded the meeting by stating, ″We′ll start a process which hopefully will lead to peace.″ He neither defined the process or its parameters, nor did he mention the Palestinian state or the two-state solution that Abbas has pursued throughout his political career. Abbas simply said ″Okay.″ He approved ″starting a process″ and he accepted starting a journey towards peace under Trump′s leadership.

For Trump, as well as most previous US administrations, peace means security for Israel and political stability. For the Israeli political leadership, as evidenced by their facts on the ground, peace means annexation, colonisation and apartheid. For the unelected and unrepresentative PA leadership, peace means entrenching their economic privileges and perceived (real or imagined) power and authority.

Abbas, his advisors and the Palestinian political leadership are unable to learn the decade-long simple lesson that is supported by ample evidence: the US is a dishonest broker for peace.

To really bring about peace would involve de-colonising and dismantling the Israeli apartheid regime and ending the illegal Israeli military occupation: that is the first step.

But neither the US administration, nor Abbas or Netanyahu are willing to travel this road. They might engage in a process that will satisfy their egos and ideological fantasies, but will certainly not secure a just and lasting peace. This will be a job for the next generation of leaders.

Alaa Tartir is the programme director of Al-Shabaka: The Palestinian Policy Network, a post-doctoral fellow at The Geneva Centre for Security Policy (GCSP) and a visiting research fellow at the Centre on Conflict, Development and Peacebuilding (CCDP), The Graduate Institute of International and Development Studies (IHEID), Geneva, Switzerland.

Around the Islamic world, lockdowns and curfews are being extended and religious ceremonies are being cancelled outright in the hope of slowing the spread of COVID-19. Here’s the ... END_OF_DOCUMENT_TOKEN_TO_BE_REPLACED

While some are beginning to protest the lockdown, others are unable to bury their loved ones in accordance with Islam. Here’s the latest from across the region END_OF_DOCUMENT_TOKEN_TO_BE_REPLACED

Coronavirus continues unabated. Iran remains a hub of infection, war-torn Syria has recorded its first case and Yemen is bracing itself for the worst. Here’s the latest from ... END_OF_DOCUMENT_TOKEN_TO_BE_REPLACED

Going by the official numbers, Turkey is doing well, especially in comparison to other countries. But does this impression correspond to the reality? There are significant reasons ... END_OF_DOCUMENT_TOKEN_TO_BE_REPLACED

With borders closing and the opportunities for international travel shrinking by the hour, we take a look at coronavirus developments across the Middle East and the wider Muslim ... END_OF_DOCUMENT_TOKEN_TO_BE_REPLACED

As the global economy reels and everyday life grinds to a standstill, we take a look at the spread of coronavirus across the Middle East and the wider Muslim world – and the ... END_OF_DOCUMENT_TOKEN_TO_BE_REPLACED
Author:
Alaa Tartir
Date:
Mail:
Send via mail

END_OF_DOCUMENT_TOKEN_TO_BE_REPLACED
Social media
and networks
Subscribe to our
newsletter