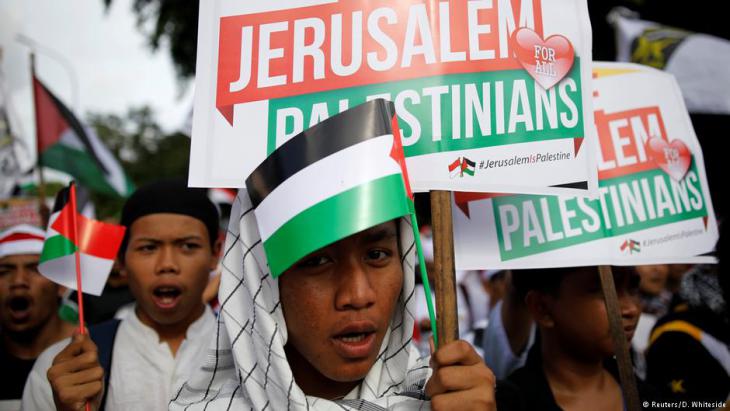 Unleashing a new wave of radicalisation?

After 1967, jihadists and Islamists mobilised people by highlighting the victimisation of Muslims and Islam. In the wake of Trump's internationally condemned decision to recognise Jerusalem as Israel's capital, jihadist and Islamist groups could now use Palestine as proof of their theory that there is a "war on Islam". Trump's declaration plays right into their hands. Commentary by Abdalhadi Alijla

In early December 2017, US President Donald Trump announced that he recognised Jerusalem as the capital of the Jewish people and the state of Israel. With this uncalculated move, Trump not only went against the will, resolutions and aspirations of the international community, he also continued his unconditional support for the right-wing government in Israel led by Benjamin Netanyahu.

Trump's decision was greeted with condemnation by Arab states, Islamic countries, European nations, Russia and China. Even Pope Francis criticised the president's move. The Turkish prime minister warned that the move would trigger holy war in the region, and Iran's parliament declared that Trump's decision could lead to conflict.

On 21 December, 192 states voted in favour of a non-binding resolution at the UN, rejecting Trump's decision and declaring it null and void. On the one hand, the UN General Assembly resolution is a slap in the face for Trump's foreign policy, since for the first time, almost all Western nations voted against the wishes of the US or abstained from voting. On the other, Trump is breaking with the US's long history of diplomacy with regard to the Middle East and, in particular, the Arab-Israeli conflict, in which the US has played the role of peace broker. With his decision, Trump has made the US part of the conflict rather than a peace mediator. 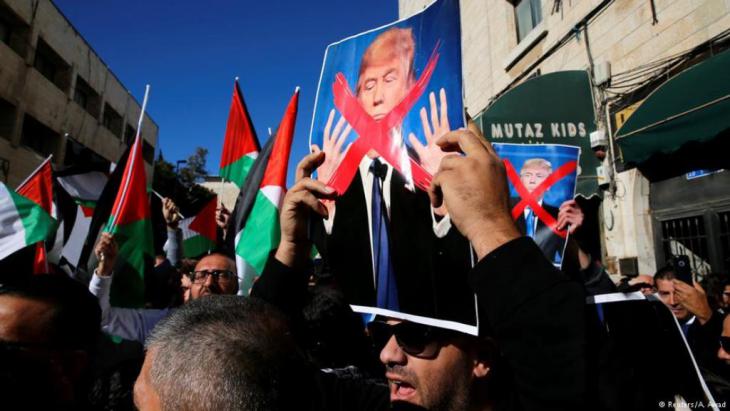 At least two people were killed and dozens injured in clashes with police in the occupied Palestinian territories in the days following President Trump's decision to recognise Jerusalem as the Israeli capital. Many thousands more protested across the Muslim world, with at least 80,000 demonstrating in Jakarta, Indonesia, alone. Pictured here: protesters in East Jerusalem

According to the 2016 Arab Barometer, which covered seven Arab countries (Algeria, Jordan, Egypt, Tunis, Morocco, Palestine and Lebanon), 14 per cent of the people surveyed said they considered the US the greatest threat to the region, with 36 per cent viewing Israel as the main threat. Less than 6 per cent saw Iran as the main threat to the region or source of instability. In the same survey, when asked about the best positive policy the US could pursue in the region, 42 per cent said it would be not to get involved and 25 per cent said it would be to solve the Arab–Israeli conflict.

While Trump's decision triggered protests across the Muslim world – primarily in the Palestinian occupied territories – I believe the real impact will become apparent in the long term. The figures mentioned above are just one-year-old; a new poll could show that a majority believes that the US is the primary source of insatiability in the region.

Trump is not only setting himself against the international community's will in order to satisfy his and Netanyahu's whim, he is also putting his country at risk because a majority of young people in the Middle East believe that the US is as great an enemy as Israel.

Hamas in Gaza, the Palestinian Authority in the West Bank, and Israel: Palestinians have fewer and fewer rights, says Khaled Elgindy. The Middle East could escalate at any time. ... END_OF_DOCUMENT_TOKEN_TO_BE_REPLACED

Joe Biden promised to make democracy and human rights central to US foreign policy. But that means not insisting on Israel's right to defend itself without mentioning its ... END_OF_DOCUMENT_TOKEN_TO_BE_REPLACED

As the Biden administration attempts to promote democracy and human rights in the Middle East, it will confront the deep-seated belief among Arabs that U.S. policies are unfair to ... END_OF_DOCUMENT_TOKEN_TO_BE_REPLACED

Ben Aylon’s debut international album sees him elevate the traditional music and instruments of Senegal and Mali into a fresh contemporary setting. Seven years in the making, " ... END_OF_DOCUMENT_TOKEN_TO_BE_REPLACED

Years ago, the International Holocaust Remembrance Alliance formulated how hatred of Jews can be recognised. Now a new definition is causing controversy. By Sarah Judith Hofmann END_OF_DOCUMENT_TOKEN_TO_BE_REPLACED

When it comes to talent, Palestine may well be able to compete with other football teams in the region, but growth and development are hampered by the situation in the Palestinian ... END_OF_DOCUMENT_TOKEN_TO_BE_REPLACED
Author:
Abdalhadi Alijla
Date:
Mail:
Send via mail

END_OF_DOCUMENT_TOKEN_TO_BE_REPLACED
Social media
and networks
Subscribe to our
newsletter