On 6 December, Washington abandoned its role as peace broker, enforcing a solution that was rejected by all parties except the Israeli prime minister and his allies. Trump's decision has put Arab regimes in an unenviable position. After all, they allied themselves with Trump during his recent visit to the region. They will now be perceived as his allies in handing over one of Islam and Christianity's most holy cities to Netanyahu.

The long-term outcome of Trump's decision is destructive, if not catastrophic. With this decision, Trump has shocked the Muslim and Arab World. The effects of this shock will not be less than the impact of the 1967 war when Israel occupied Jerusalem, the West Bank, the Gaza Strip, the Sinai and the Golan Heights. 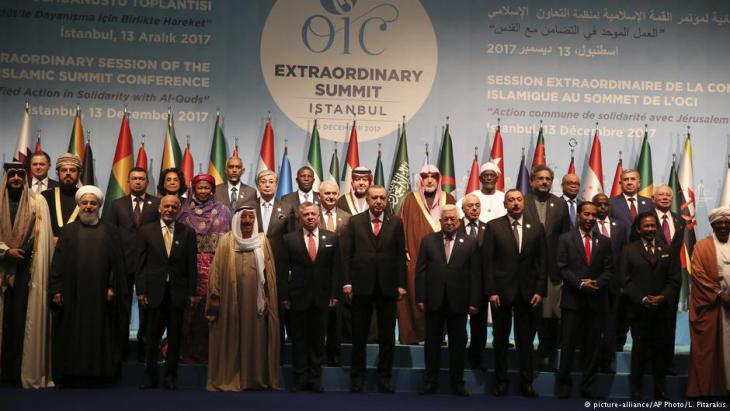 A final communiqué, agreed by delegates from all 57 members from the Organization of Islamic Cooperation (OIC) on Wednesday, called on "all countries to recognise the State of Palestine and East Jerusalem as its occupied capital". Pictured here: leaders of Islamic nations at the conference of the OIC in Istanbul, 13 December 2017

However, the main difference here is that there is now no Arab or Muslim leadership that can absorb the impact and instantly fill the gap to meet the demands of the Muslim and Arab nations. Despite the fact that Turkey and Iran are filling the gaps as regional powers, standing up to Israel and Israeli policies, the current situation will lead to a new wave of radicalisation.


Fanning the flames of renewed radicalisation

After 1967, one argument used by jihadists and Islamists to mobilise individuals was the victimisation of Muslims and Islam. Jihadist and Islamist groups might now use Palestine as proof of their theory that there is a "war on Islam". The declaration that Jerusalem is the capital to Israel is grist to the mill of this narrative.

In my opinion, the current political situation is similar to that of 1979, which saw the Islamic revolution, the Soviet withdrawal from Afghanistan, the Arab boycott of Egypt after the peace treaty, the Muslim Brotherhood's coup d'état in Sudan and the creation of Algeria's Islamic Salvation Front (FIS). New players are now involved and the consequences will be long term.

New radical groups will form and existing radical groups will recreate themselves after their defeat in Syria and Iraq. Their comeback will be facilitated by Jerusalem and the issue of Palestine. As Mohammed Masharqa points out, it is possible that an alliance could be formed between leftist groups and jihadi Salafists, which are both hostile to Arab regimes. However, there is stronger evidence to suggest that the current situation will give Muslim Brotherhood activists or loyalists new hope for their fight.

In short, given the frustration and hopelessness felt by the young, Trump's decision to recognise Jerusalem as the capital of Israel will motivate groups and individuals that are hostile to the US and Arab regimes to regroup and recreate themselves. The radicalisation process in the region and its consequences could be catastrophic in every respect and spread chaos across the whole region.

Abdalhadi Alijla is the executive director of the Institute of Middle Eastern Studies Canada (IMESC). He serves as the regional manager for Gulf countries at Varieties of Democracy Institute, Gothenburg University, Sweden. He has PhD in Political Studies from Milan University. He is a Palestinian-Swdish academic and writer.

Hamas in Gaza, the Palestinian Authority in the West Bank, and Israel: Palestinians have fewer and fewer rights, says Khaled Elgindy. The Middle East could escalate at any time. ... END_OF_DOCUMENT_TOKEN_TO_BE_REPLACED

Joe Biden promised to make democracy and human rights central to US foreign policy. But that means not insisting on Israel's right to defend itself without mentioning its ... END_OF_DOCUMENT_TOKEN_TO_BE_REPLACED

As the Biden administration attempts to promote democracy and human rights in the Middle East, it will confront the deep-seated belief among Arabs that U.S. policies are unfair to ... END_OF_DOCUMENT_TOKEN_TO_BE_REPLACED

Ben Aylon’s debut international album sees him elevate the traditional music and instruments of Senegal and Mali into a fresh contemporary setting. Seven years in the making, " ... END_OF_DOCUMENT_TOKEN_TO_BE_REPLACED

Years ago, the International Holocaust Remembrance Alliance formulated how hatred of Jews can be recognised. Now a new definition is causing controversy. By Sarah Judith Hofmann END_OF_DOCUMENT_TOKEN_TO_BE_REPLACED

When it comes to talent, Palestine may well be able to compete with other football teams in the region, but growth and development are hampered by the situation in the Palestinian ... END_OF_DOCUMENT_TOKEN_TO_BE_REPLACED
Author:
Abdalhadi Alijla
Date:
Mail:
Send via mail

END_OF_DOCUMENT_TOKEN_TO_BE_REPLACED
Social media
and networks
Subscribe to our
newsletter