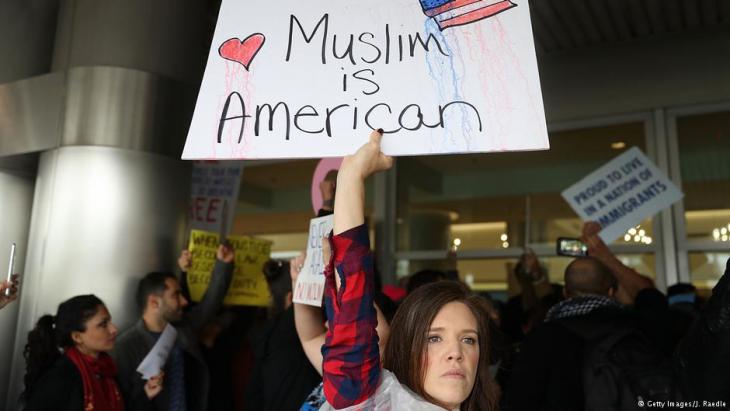 Thousands are demonstrating in front of the White House against the new immigration ban on people from Syria, Libya, Yemen, Somalia, Iraq, Iran and Sudan. Their message: this measure is un-American. The President claims his action is justified. Matthias Kolb reports from Washington

Abraham Al-Helfi has found a good spot. The 39-year-old stands on a wall next to Lafayette Square, from where he can see the White House and the crowd gathering at his feet. Eight days after the Women's March, another protest is taking place against US President Donald Trump, but this time the mood is darker.

"My mom and dad are NOT terrorists. Let them come home," it says on the sign Abraham is holding up. The 39-year-old has come here from Philadelphia to make clear to Trump the consequences of his latest executive order. "Ever since 2011, I've been trying to get permission for my father to come here. He's 78. My mother has a Green Card and is visiting him right now in Baghdad – I'm afraid she won't be able to come back," says Abraham, who works in the IT industry. "What's happening is just not right," he says. Many are shocked at how valid documents could become worthless pieces of paper overnight. This decree is typical of the chaos President Trump has caused on his first days in office. On Sunday, however, his chief of staff, Reince Priebus, assured the public that holders of a Green Card were not affected by the ban.

But a feeling of uncertainty remains, and Abraham fears that he will have to apply for his mother to be allowed to come "home" to the USA. So far, America has been just that for the Al-Helfi family, but now Abraham has serious doubts. At the same time, the solidarity demonstrated by the citizens gives him strength and the feeling that Donald Trump is speaking only for a minority.

Thousands of people have responded to a call on Facebook and are marching from the White House to the Capitol building under the slogan "No Ban, No Wall". The chants criticise plans for a border wall with Mexico, make fun of Trump's appearance ("Hands too small, can't build a wall") or urge the government to take in more refugees. The protesters hold signs saying "We are all Muslims", "You belong to our country" or "Refugees have suffered war and persecution. Trump can't even take the jokes on Saturday Night Live".

These slogans demonstrate great creativity, but unlike at the Women's March, many more protesters are now describing their own situation. Lames Al-Kebsi comes from Yemen and is in her sophomore year at the University of Maryland. She wrote on her sign that the new decree faces her with a horrible dilemma: "I want to see my family, but I also want to get my degree. Don't make me choose between the two." 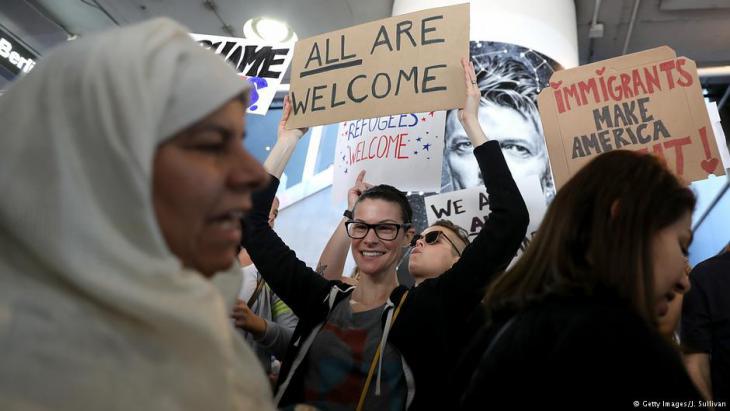 Solidarity with refugees and Muslims: thousands of people once again came out to demonstrate in the USA against President Donald Trump′s immigration ban on citizens from a number of Muslim countries. Thousands more demonstrated in front of the White House and in Boston. Activists called for demonstrations in other major cities, as well as several airports across the country

Lames is afraid that she won't be able to renew her student visa and will have to remain in the country illegally to finish her education. A visit to her parents, who work in Saudi Arabia, is impossible for the time being, she says. She likewise lauds the showing of solidarity: "For the last few months, people have started being nicer to me. I was amazed at how many people reject Trump and how divided the country is on which direction it should take." The 19-year-old wears a headscarf and raves about the Women's March: "That was my first demo, and what an experience! I already knew that many people would also come out today."

Trump: this is not an anti-Muslim measure

US President Trump defended his order in a statement released Sunday afternoon. The 70-year-old emphasised that America "will continue to show compassion to those feeling oppression, but we will do so while protecting our own citizens and border." He also pointed out that his predecessor Barack Obama denied visas to Iraqi refugees for six months and thus took a similar step. The seven – majority Muslim – states had been identified previously by Obama as "sources of terrorism": Syria, Libya, Yemen, Somalia, Iraq, Iran and Sudan.

Like most Republicans, Trump denies that his executive order amounts to a "Muslim ban", as the media is "falsely" reporting. After all, 40 countries worldwide that are majority Muslim are not affected. Trump, who announced this very measure throughout his campaign, puts it this way: "This is not about religion – this is about terror and keeping our country safe."

Even though this statement was made public only after the protest march, it is not likely to move many demonstrators to reconsider. Some people carried signs noting that no majority Muslim country was on the list in which the Trump Organization does business (for example Turkey or the United Arab Emirates).

For someone like Bilal Askanyar, it is virtually impossible not to see the ban as part of growing Islamophobia in the USA. "The situation is becoming more difficult for Muslims in this country. Ever since 9/11, we have all been classified as terrorists, and even Democrats like former President Bill Clinton are playing along. "I'm tired of always having to prove my patriotism as an American Muslim," the 31-year-old says.

"This is how political movements get started"

Bilal was "endlessly sad" when he learnt of Trump's order: "It goes against everything the USA stands for." He was five years old when he arrived in San Francisco from Afghanistan with his parents, and today he has a US passport. Trump's electoral victory politicised him, and, like many others, he is determined to defend his personal values: "From now on, I'm going to take part in every protest march. Look around you: this is how political movements get started. Jews are showing solidarity with Muslims, Muslims with Latinos, and Latino with gays, lesbians and transsexuals."

The new protest movement is certainly not lacking in energy and motivation, and some observers are calling it the "left-wing tea party". This weekend showed that the Women's March was not a one-off event. When the crowds passed by Trump's hotel, the words "Shame on you!" rang out from thousands of throats. Many are denouncing not only Trump but also his controversial advisor and ex-Breitbart chairman Steve Bannon ("Ban Bannon") as well as Trump's son-in-law Jared Kushner.

Kirsten Eyles came to Washington, DC, from Maryland with her daughter, and her poster is aimed directly at Kushner: "Hey Jared, do you remember Rae Kushner? She was a refugee and your grandmother." Eyles can't believe that Kushner, the grandson of Holocaust survivors, can now support Trump's policy. "It doesn't make sense; we Americans are all descended from refugees. The reason Jared is doing so well is that his grandmother was allowed to immigrate." For the 46-year-old, demonstrating is a "new part-time job". Trump leaves her no choice.

After three hours of marching, the protesters have almost reached the train station. Before the crowd breaks up, it makes its way to the Capitol, the seat of the US Congress. The Democrats, who are in the opposition in both the House of Representatives and the Senate, want to submit legislation to undo the immigration ban.

"See you next weekend!"

Chuck Schumer, the most powerful Democratic Senator, declared at a demonstration in New York City, within sight of the Statue of Liberty, that the order is un-American and contrary to the core values of the country. Sunday also saw protests in Seattle, Chicago, Los Angeles, Minneapolis, New Orleans and dozens of other cities.

One of the signs that got the most cheers in Washington, DC, was held up by Jimmy Meritt. On the front he wrote "I think we should now do this every weekend" and on the back "See you next weekend!". Jimmy is wearing a "pussy hat" that his wife brought back home from the Women's March. He stayed home to take care of their young child. "Today I'm here, we're taking turns. Donald Trump should know that one of us will always come out to protest against him."

Since President Abdul Fattah al-Sisi seized power in Egypt in 2013, he has ruled the country with an iron fist. Civil society, opposition and free press struggle to survive. Tens ... END_OF_DOCUMENT_TOKEN_TO_BE_REPLACED

Very different Western reactions to the suffering in Ukraine and the Arab world show that there is a profound rift among cultures. Essay by Michael Young END_OF_DOCUMENT_TOKEN_TO_BE_REPLACED

Sultana Khaya, 41, has been peacefully resisting the Moroccan occupation of Western Sahara for many years. Because of her campaign to assert the self-determination of the Sahrawi ... END_OF_DOCUMENT_TOKEN_TO_BE_REPLACED

Many Turks are dissatisfied with the international status of their country. At the same time, opinion polls reveal great scepticism among the Turkish population towards the USA. ... END_OF_DOCUMENT_TOKEN_TO_BE_REPLACED

Tunisia's president has been carrying out a coup by degrees, demolishing the country's hard-fought democratic gains bit by bit. With an economy in turmoil and a splintered ... END_OF_DOCUMENT_TOKEN_TO_BE_REPLACED

END_OF_DOCUMENT_TOKEN_TO_BE_REPLACED
Social media
and networks
Subscribe to our
newsletter