The still-powerful generals watched these developments from the barracks to which they had retreated. After more than 60 years of changes in military leadership coming only after coups, the civilian-led government replaced the commander of the armed forces at the end of his term.

This was the third momentous achievement for the rule of law and democratic development in Pakistan, which now seemed to be in a strong position to continue strengthening its political system and institutions. Its fairly well-developed political parties competed on a level playing field, elections were held when the constitution so required and transfers of power occurred without violence.

Then, in 2016, the release of the Panama Papers exposed the extent of tax evasion by the world′s wealthy. Members of the Sharif family, it was revealed, had illegally transferred huge amounts of money into numerous offshore companies, which had then invested in expensive properties in London and the Middle East.

These disclosures opened the way for Pakistan′s own ″Arab Spring″ moment, with young people rebelling against the elite-dominated political system. Pakistan Tehreek-e-Insaf – a political party led by the former cricketer Imran Khan – provided just the platform for that rebellion. 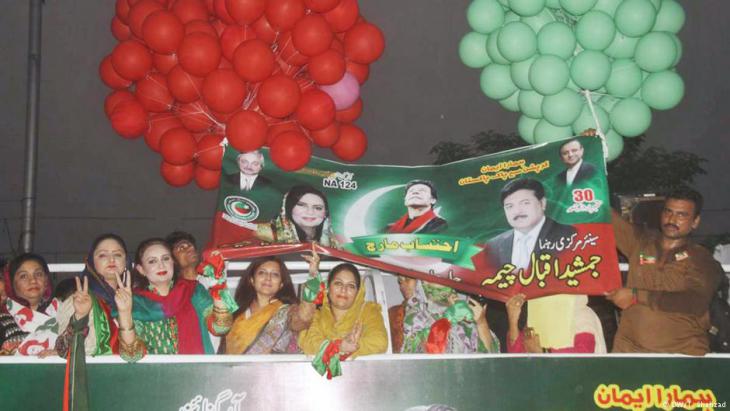 New democratic impetus: when Pakistan′s premier was caught up in the Panama Papers affair, the opposition PTI threatened to call its young supporters onto the streets if the Sharif family′s financial dealings were not properly investigated. In July 2017, the country′s Supreme Court ruled that Sharif had acted improperly and could not remain a member of the national assembly, let alone prime minister

Featuring a platform that includes a focus on justice and good governance, PTI had been gaining ground since the 2008 election and received a new surge of support from urban youth demanding better services and less corruption. That is no small cohort: some 75% of people in Pakistan′s large cities are below the age of 25.

Wielding its growing influence, the PTI threatened to call its young supporters into the streets if the Sharif family′s financial dealings were not properly investigated. Given Pakistan′s history of military intervention in politics – in 1958, 1969 and 1977 – in response to popular protest, the PTI′s threat had to be viewed very seriously.

Pakistan avoided political escalation when the judiciary decided to investigate the Panama Papers′ revelations. In July 2017, the Supreme Court announced its verdict: Nawaz Sharif had acted improperly and could not remain a member of the national assembly, let alone prime minister. The PML(N) elected Shahid Khaqan Abbasi, a respected cabinet member, as Sharif′s successor as party leader and prime minister. Military leaders expressed satisfaction at how the situation was handled.

At the same time, given the fragility of its democratic institutions and the lingering threat of terrorism, the destabilising potential of Sharif′s removal should not be underestimated. Trump′s insistence on playing to his nationalist and xenophobic (and, specifically, anti-Muslim) base, instead of advancing the real national security interests of the U.S., heightens the risk.

There is, however, some reason for hope. Pakistan′s response to its recent political challenges indicates a continued commitment to fight for democracy – a commitment that could serve as a badly needed model for many other Muslim-majority countries.

Calls for a free Kashmir are becoming louder on both sides of the divided region. Can the German reunification model be applied to the India- and Pakistan-ruled Kashmirs? And what ... END_OF_DOCUMENT_TOKEN_TO_BE_REPLACED

Indiaʹs constitution prohibits discrimination on the basis of religion, but the government of Prime Minister Narendra Modi does not care. Run by Hindu-supremacists, it is ... END_OF_DOCUMENT_TOKEN_TO_BE_REPLACED

Using a combination of poetry and narrative, Pakistani poet Yusra Amjad talks about her compatriots' perception of the institution of marriage. END_OF_DOCUMENT_TOKEN_TO_BE_REPLACED

Abu Dhabi and Riyadh see a natural partnership with Modi’s government, a co-operation that could change the dynamics of the South Asian-Gulf nexus. By Jean-Loup Samaan END_OF_DOCUMENT_TOKEN_TO_BE_REPLACED

To many the name of Pakistan calls up images of Islamic extremism, religious intolerance, state corruption and the long years of terror. It’s probably safe to say that single malt ... END_OF_DOCUMENT_TOKEN_TO_BE_REPLACED