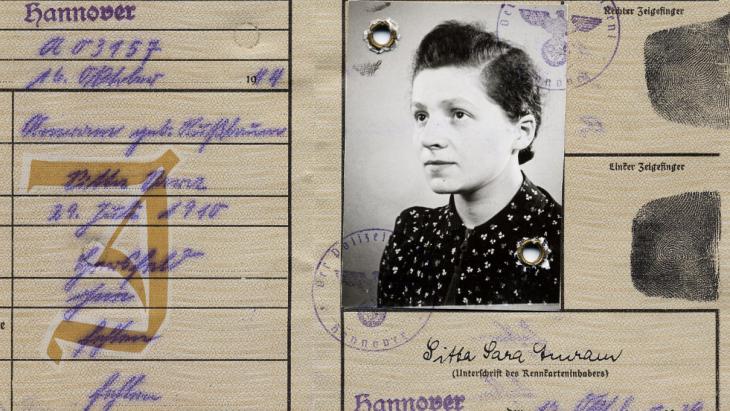 Donald Trump′s unashamedly populist election campaign made a point of targeting minorities – among them foreigners, women, the disabled and Muslims. His commitment to the idea of Muslim registration is a sinister echo of 1930s Germany and should put us all on our guard. Commentary by author Fred Amram

America's president-elect wants special registration for Muslims, especially foreign Muslims. My wife and I are ready to stand in line, ready to sign up. Although we′re Jewish, we want to ensure that we don′t have a repeat of what happened in Nazi Germany. Registration of Jews and other seemingly unimportant laws in the 1930s predated the death camps of the ′40s.

I was born in Germany, just as Hitler and his party were elected to power. I remember the special registration cards for Jews. I remember the large ″J″ for Jude. I show my mother′s identification card to anyone who cares to see. It looks just like my father′s and my grandmother′s and those of all the other Jews in Hanover, Germany. The same pose. Always that half profile. Always the fingerprint of the right and left forefinger. Always the eagle and swastika. Always that large ″J″.

A Jew who was caught not carrying the special registration card was subject to instant arrest. Police had the authority to shoot on sight. Jews were outsiders marked with a special identification card as well as a cloth Star of David.All this happened before Auschwitz was built, before the death camps, before the barbed wire, before the skeletons, before the Zyklon B gas. First, the ID cards and laws that took away our citizenship. Then Jews were not allowed to marry non-Jews. Jews were forbidden radio ownership, and then the Gestapo visited our home and then … . Step by step we inched towards the Holocaust.

What does it matter if Muslims are required to register with the government? A small inconvenience. Will it assure greater safety? Probably not, but what′s the harm?

However, I wonder who will be required to register next. I wonder what additional minor inconveniences Muslims might experience next. What civil liberty will vanish next in our United States?

We should all promise to register as Muslims

I am reminded that Christian X, king of Denmark during World War II, personally threatened to wear a Star of David if German invaders forced Jews to wear them, as they did in most other parts of Europe. The king wrote in his diary:

″When you look at the inhumane treatment of Jews, not only in Germany but occupied countries as well, you start worrying that such a demand might also be put on us, but we must clearly refuse this due to their protection under the Danish constitution. I stated that I could not meet such a demand towards Danish citizens. If such a demand is made, we would best meet it by all wearing the Star of David.″

Let us all promise now that if any group is required to participate in a special registration, we will join that special group. We will be ready to defend equal protection under the law. We will not stand by. We will stand up.

We commit ourselves to NEVER AGAIN!

Fred Amram is a retired University of Minnesota professor and board member of World Without Genocide. He is author of ″We′re in America now: A survivor′s stories″.

Home
Print
Newsletter
More on this topic
Islamophobia in the USA: Standing up for Muslim rightsGermany′s Islam debate: For all our freedoms!Muslims in Germany following the Berlin attack: "It's not our fault!"Fred Michael Brick Amram's homepage
Related Topics
AfD | Alternative for Germany, Democracy and civil society, Donald Trump, Freedom of religion, Holocaust, Human rights, Islamophobia, Judaism | Jews, Muslims in the West, Right-wing populism
All Topics

Iranian author Fariba Vafi is adept at describing everyday scenes and concealing within them something ambiguous, in parts strange and grotesque. She writes novels – which have ... END_OF_DOCUMENT_TOKEN_TO_BE_REPLACED

Her grandparents are Jews – born in Tunisia and Algeria. Director Cleo Cohen has now broken the silence about this with a very personal debut. By Nadine Wojcik END_OF_DOCUMENT_TOKEN_TO_BE_REPLACED

Life imprisonment for crimes against humanity: that was the sentence handed down to Anwar Raslan in the world's first trial of a member of the Syrian torture system. Matthias von ... END_OF_DOCUMENT_TOKEN_TO_BE_REPLACED

Every year in December, the team at Qantara.de takes a look back at the articles that proved most popular with our readers. This year is no different. Here is a run-down of the ... END_OF_DOCUMENT_TOKEN_TO_BE_REPLACED

With his new album, "A Voice Keeps Calling Me", the Persian santur player Kioomars Musayyebi is building bridges from Iran across the Arab world to European early music. By Stefan ... END_OF_DOCUMENT_TOKEN_TO_BE_REPLACED

Former lawyer Said Haider has invented a chatbot for those seeking advice on anti-discrimination issues – Meta is the first chatbot of its kind in the world. In conversation with ... END_OF_DOCUMENT_TOKEN_TO_BE_REPLACED
Author:
Fred Amram
Date:
Mail:
Send via mail

END_OF_DOCUMENT_TOKEN_TO_BE_REPLACED
Social media
and networks
Subscribe to our
newsletter