In his essay, Tunisian writer Mustapha Tlili reflects on the differences between the toppling of Tunisia's former President Ben Ali and the toppling of his predecessor, Habib Bourguiba, the secular nature of the recent uprising, and the likelihood of the Tunisian revolt triggering a domino effect in the Arab world

​​As I try to grasp the full meaning of the Tunisian Revolution and gauge its future, I look at my desk, where I have spread two issues of the New York Times, both featuring Tunisia on their front pages. The two issues are dated 23 years apart.

The first is a yellowish, wrinkled copy from 7 November 1987. The article beneath the headline, "A Coup is Reported in Tunisia", reported the fall of Habib Bourguiba, the aging founder of modern Tunisia and a hero of its independence struggle. He had been ousted in the dead of night in a bloodless coup staged by his prime minister, Zine El Abidine Ben Ali.

In the days that followed, tens of thousands gathered in downtown Tunis to celebrate their deliverance from years of stagnation and uncertainty, caused by Bourguiba's worsening senility. Ben Ali, the new president, was a hero to most and, in the first years of his rule, deservedly so.

The second front page is from Saturday, 15 January 2011. The headline: "President of Tunisia Flees, Capitulating to Protesters."

This time, however, the report is less clear, less reassuring. Who were the protesters? What motivated them? Where will they drive the country? With Tunisia regarded by most Western analysts as "Arab" and "Islamic", would there be a "domino effect" in the Middle East?

Looking for answers, I scrutinize the large picture to the left of the headline. A sea of people fills the beautiful, late nineteenth-century Habib Bourguiba Avenue. Some local estimates put the number of protesters on 14 January at between 50,000 and 60,000.

Habib Bourguiba was president of Tunisia for 30 years before being ousted in a bloodless coup staged by his prime minister and successor, Zine El Abidine Ben Ali

​​These are typical Mediterranean faces, mostly male and young – the oldest seem to be in their thirties. They look clean-shaven; even with a magnifying glass I do not detect a single beard among them.

There are also some young women, but no headscarves, veils or burqas in sight. To my eyes, the event could be taking place in Barcelona, Lyon or Naples.

The protesters are holding Tunisian flags or signs bearing various symbols and slogans rejecting Ben Ali and the authoritarianism he represented in his late years. Here too, I cannot find a single reference to Allah, Islam or the ummah (community of believers).

All this is to say that what will most likely go down in history as the "Jasmine Revolution" was, to all appearances, a secular revolution.

Cyberspace has been inundated with tweets and Facebook posts since the uprising began. The messages speak of liberty, freedom of expression, good governance, pluralism, democracy, and human rights. Objectives not in line with these aspirations have been criticized and often shunned. Already, Libya's leader, Muammar al-Gaddafi, and Qatar television preacher Sheikh Qaradawi have been ridiculed for putting an Arab or Islamist spin on events in Tunisia.

The protesters who ended Ben Ali's regime are the educated sons and daughters of the large, secular middle class that was built over decades by Habib Bourguiba. Prior to his rule, even before the French takeover in 1881, a line of nationalist leaders stretching back to the late eighteenth century looked to Europe and the Enlightenment for solutions to the country's problems. Tunisian identity was shaped by this specific history.

According to Mustapha Tlili, despite being considered a hero by most after he took office and having done much for the country, President Ben Ali "succumbed to the temptations of corruption and repression"

​​That does not bode well for a domino effect, as no other Arab country has either a strong middle class or a tradition of modern, secular government. A revolution in any of these countries might easily bring Islamists to power, but this would have little to do with Tunisia's secular uprising.

It should be acknowledged that Ben Ali strengthened the foundations of Tunisian exceptionalism, furthering gender equality and separation of religion and state. He achieved an enviable rate of economic development for a country starved of natural resources, helped to eradicate poverty, and deepened Tunisia's ties with Europe through tourism, trade, and cultural relations.

Unfortunately, however, Ben Ali succumbed to the temptations of corruption and repression, described in great detail by the former United States ambassador to Tunisia, Robert F. Godec, in cables released last month by WikiLeaks.

Despite the extensive physical damage and loss of life inflicted on the country by some of Ben-Ali's die-hard supporters, the tense and dangerous few days that followed the dictator's fall did not change the course of the revolution. More remarkably, the Tunisian army played the role of a genuinely professional, neutral, loyal republican institution, acting in support of the civilian process. 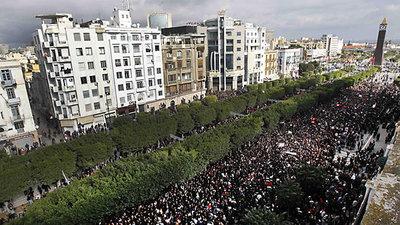 Tlili says that he feels pride and hope following the revolt in Tunisia: "pride for a country that has shown the world its readiness to establish a genuine, secular democracy, and hope for what is to come"

​​As a result, security and normality appear to be gradually returning. Initially, a provisional government that included members of the opposition was formed, but the opposition leaders soon left in protest at the number of cabinet holdovers from Ben-Ali's administration.

So an inclusive government is still in the offing. Nevertheless, the new government has expressed a solemn commitment to freedom of information and assembly, the release of all political prisoners, and free and internationally supervised presidential and legislative elections within six months.

The revolution in Tunisia was just a matter of time – a popular uprising to end a system that failed to deliver the free society for which the Tunisian public has long been ready.

Looking once more at the news of 15 January, I feel pride and hope: pride for a country that has shown the world its readiness to establish a genuine, secular democracy, and hope for what is to come.

Mustapha Tlili is a Tunisian writer, New York University research scholar, and founder and director of the NYU Center for Dialogues. His last novel, Un après-midi dans le desert (An Afternoon in the Desert), won him the Comar d'Or, Tunisia's highest literary award.

Tunisia's Opposition Movement
Stumbling Blocks on the Road to Democracy
The opposition is clearly relieved about the overthrow of the dictator Ben Ali. Yet the movement needs time to reconstitute and prepare for elections. Alfred Hackensberger reports from Tunis

END_OF_DOCUMENT_TOKEN_TO_BE_REPLACED
Social media
and networks
Subscribe to our
newsletter