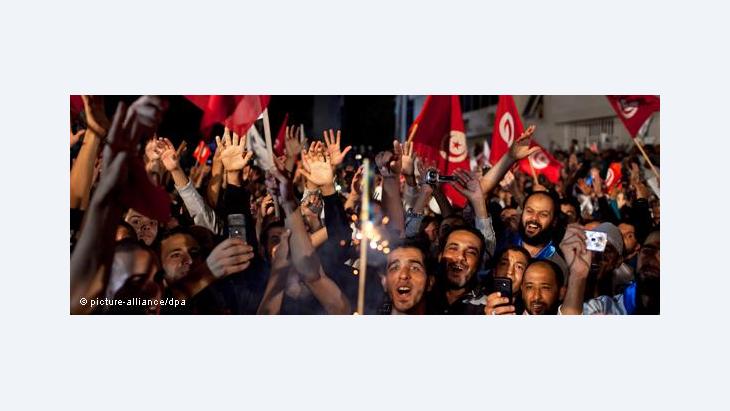 Tunisia after the Elections
Ennahda and the Challenges of Democracy

﻿In the recent Tunisian elections, the Islamist Ennahda party ended up way ahead of its competitors. The Tunisian philosopher Jameleddine Ben Abdeljelil says the way the party has developed internally makes it possible that it will be able to play a constructive role in a pluralistic and democratic system

The clear winners of the first democratic elections in post-revolutionary Tunisia are those political parties which took a tough line in opposing the old regime and which have made their radical break with the old dictatorship into a part of their election manifestos. It was for this radical break that most Tunisians voted.

The secular political parties and the political elites in Tunisia have accepted the election result, and thus Ennahda's clear lead in the polls, even if they are disappointed at their own results. But their acceptance of the result hasn't meant an end to the polarised and emotional discussion which they held during the campaign on how far the Tunisian Islamists can turn into democrats.

Among the world's Islamist movements, Ennahda is clearly one of the liberal ones, but its membership reflects a wide range of opinion, from cultural liberals to conservatives and even Salafists.

But much of what is said about the party has a hysterical undertone. One needs to look at the ideological and political discourse within Ennahda on the basis of its public statements and its other publications over the last decades, if one wants to come to a balanced judgment about the party.

A change of perspective in exile 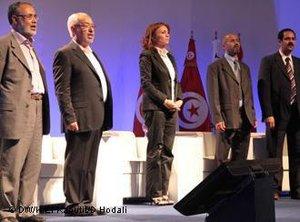 ​​The fact that many of their supporters and activists were in exile in various European countries since the nineties has given the party the opportunity to include the experience which such members gathered abroad into the development of their party's positions, together with their knowledge of modern Western social, political and cultural structures and ways of life.

This exile experience, in my view, is one reason that Ennahda has initiated a process of critical reflection and deconstruction of outmoded but deeply rooted prejudices about concepts such as democracy, modernity and secularism. That has led them to moderate their absolute rejection of secularity and laicisim. The members of the party have nowadays a much more differentiated view of the issues.

Rigid laicism among the Tunisian elite

The Tunisian elite has always upheld a firmly secularist line, influenced almost wholly by French history and the French discourse about religion and laicism.

This specifically French version of laicism among the Tunisian elite implies the radical exclusion of religion from the public arena. But the experience of other Western European countries, like Britain, Germany, Austria or the Scandinavian countries, shows that it is possible to understand secularism in pluralistic terms; and this new understanding has now been brought to Tunisia by those who were in exile.

This has allowed a certain common ground to develop between the values and concepts of modernism, democracy and secularism on the one hand, and Islam as a culture and religion on the other. This developing debate has had a "de-neuroticising" effect on the conflict. 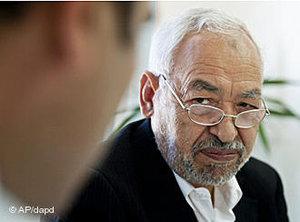 "An alternative to the static, literalist approach to religious texts": According to Ben Abdeljelil, Ennahda no longer wants to re-Islamise Tunisian society. Pictured: Rachid Ghannouchi, Ennahda's founder and intellectual leader

​​One aspect of Ennahda's religious thinking is its traditional acceptance of the historical dimension in its interpretation of religious texts, such as the Koran, the hadith and fiqh, and the totality of the Muslim law which has been developed from Koran and Sunna. This acceptance largely stems from religious reform efforts in the Maghreb and Tunisia which started in the nineteenth century.

Ennahda orients itself in its interpretation of Sharia on the maqasid principle, which considers the "higher aims" of the Sharia and takes into account historic changes in the context of reality.

This interpretative method makes Islamic legal practice more flexible and closer to real life, and it offers an alternative to the static, literalist, traditionalist approach to religious texts which claims validity beyond the vagaries of history.

Ennahda has emancipated itself from the positions it held in the seventies and eighties, when it tried to re-Islamise Tunisian society. Nowadays the party's strategy is to come closer to the reality of life in Tunisian society, instead of trying to convert it.

The challenge which faces the various political actors in Tunisia as well as the Islamists is the integration of Ennahda as an Islamist party into the democratic political system which has yet to be established in the country. 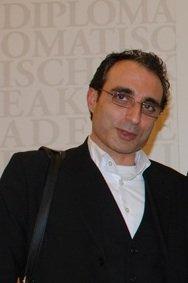 ​​Meeting this challenge would be another first in the history of Tunisia and the Arab world – and another step in the process of the Arab liberation revolution. Such a development would lead to structural changes; it would allow the development of new ideas; new intellectual and political elites would emerge to find their place in a new cultural and political landscape.

The success of democracy in Tunisia would show the way for the whole Arab world. The revolution itself and the democratic elections which followed it have given the lie to the widely-held view that the Muslim Arab world is incapable of democracy and freedom. They have disproved decades-old theories about the clash of cultures or the end of history. This is where history begins again.

The Arab Spring has gone along with a structural uprising and change of perceptions in the Arab world. However, in the Western political, media and cultural landscape, an equivalent change in perceptions regarding the Muslim Arab world has yet to take place.

Ennahda shows that it is an error to describe political Islam as static. Political Islam is very dynamic and has to be analysed in a differentiated way. The current perception of the Muslim Arab world in Western public discourse has to be questioned and deconstructed – it is no longer an accurate picture of reality.

The effects of the Arab Spring, and the waves that it makes, will probably not be limited to the Arab world: throughout the world, people are yearning for more freedom, dignity, respect and social justice.

Tourists have been returning to Tunisia, Egypt and Morocco. But, given the global uncertainty caused by the Ukraine war, will the comeback be enough to save a struggling sector, ... END_OF_DOCUMENT_TOKEN_TO_BE_REPLACED

By 2050, the Middle East and North Africa could be dealing with many more elderly people suffering from dementia. A lack of facilities, specialists and local knowledge means the ... END_OF_DOCUMENT_TOKEN_TO_BE_REPLACED

Tunisians are set to vote on a new constitution on 25 July. The prominent lawyer and women's rights activist Yosra Frawes fears the referendum could facilitate a return to ... END_OF_DOCUMENT_TOKEN_TO_BE_REPLACED

END_OF_DOCUMENT_TOKEN_TO_BE_REPLACED
Social media
and networks
Subscribe to our
newsletter