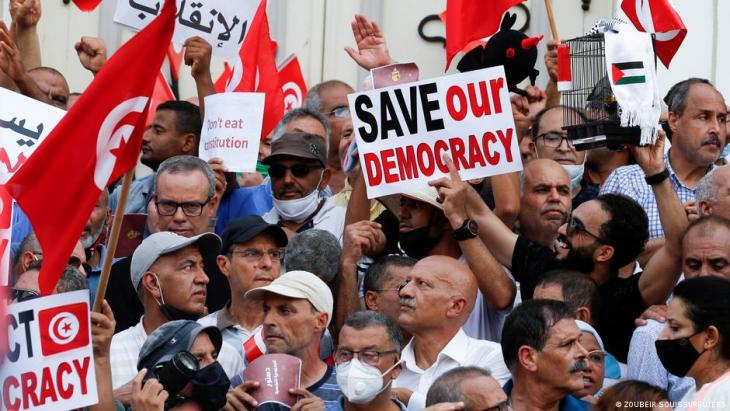 Tunisia: President Saied's power grab
How will the president wield his unprecedented powers?

Kais Saied has stressed his loyalty to "the suffering people" and has vowed to fight corruption. His upcoming state budget will show whether he really means it or not. By Mariam Abdel Baky and Olfa Lamloum

Eleven weeks after Tunisia's President Kais Saied first concentrated power in his own hands, with an announcement that he intends to ignore parts of the constitution as he overhauls the country's political system, a new government made up of technocrats not affiliated with political parties has been formed by decree.

Afforded considerably reduced prerogatives, it is set to commence work without an exit strategy from the economic and political crisis that has aggravated inequity and exclusion. The new government's brief declaration of intent reiterated the overused statements made by all previous cabinets around a fight against corruption and revitalising the economy. However, there is no plan on the issues that matter, particularly unemployment and regional inequality.

Since he first dissolved parliament on 25 July, Saied has constantly stressed his loyalty to "the suffering people", while castigating those who have "starved them". However, he has yet to take a decision in their favour or signal any break with the economic and social policies implemented by all successive governments since the fall of former president Zine El Abidine Ben Ali in 2011.

More than ten years after the 2011 revolution, structural socio-economic problems remain unanswered. They have in fact been exacerbated.

The response to COVID-19 has exposed the stubborn social and territorial inequalities found in accessing health rights, which remain undermined. In Tataouine, the southern governorate bordering Libya, in 2015 there were just 58 medical doctors for every 100,000 citizens according to the last report from the Ministry of Health, as opposed to 184 in the more affluent Sousse. Today, according to Mohamed Ben Moussa, director of primary healthcare centres in Tataouine, a year and a half into the pandemic, the only hospital in the city of 149,867 citizens – has just six specialists. 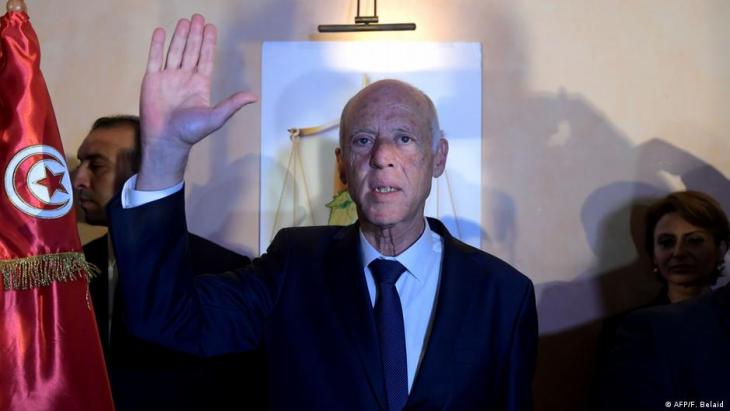 On 25 July, President Kais Saied (pictured above celebrating his landslide victory in the 2019 presidential election) sacked the Tunisian prime minister and suspended parliament, consolidating power in what critics called a coup. He then proceeded to give himself sweeping powers and crack down on opposition, arresting and imposing travel bans on judges, lawmakers and businessmen and closing the TV station owned by his political rival – all in the name of fighting corruption

Meanwhile, the unemployment rate is at almost 18%. It reaches more than 40% for those aged under 24. Joblessness also mainly affects the interior regions in the west and south of the country.

But while the president affirms his adherence to the social demands of the 2011 revolution, his central response to the quest for dignity and social justice is not only institutional but is also based on his belief in his own incarnation of the people.

In fact, Saied's main proclamation is rehabilitating the sovereignty of the people by an anti-parliamentary reform through amending the constitution set in 2014 by the Constituent Assembly, elected by universal suffrage in the most democratic vote in the country since 1956. The outlines of this reform are far from clear, but the intention is undoubtedly to disrupt the order of the institutions, in favour of an all-powerful president and a national assembly not mandated by general election, but one whose members represent only the voters registered at the level of local councils.

The only catchphrase of Kaies Saied's social programme is the fight against corruption. This token of legitimation has already been exploited by other political actors in Tunisia and is mobilised by the president in an incantatory and top-down manner.

Saied ignores the systematic destruction, since the mid-1980s, of the state's social regulatory power and its privatisation. Corruption is not only found in the alleged illegal interference of money in the election campaigns of Saied's adversaries. Nor is it also a simple distortion of the economic rules of the game by a few powerful economic lobbies.

Corruption is structural in Tunisia. It is at the very basis of an unequal tax system, which notably taxes low wages and promotes tax evasion for the benefit of the richest. It is also at the heart of the governance of precarity and poverty, through tolerating and regulating the so-called informal activities: smugglers of basic subsidies, informal peri-urban transport workers, street vendors, etc. In compensating for the disintegration of the welfare state those "illegal" practices have been tolerated as a remedy for massive unemployment, and in doing so maintained and reinforced arbitrariness and clientelism. 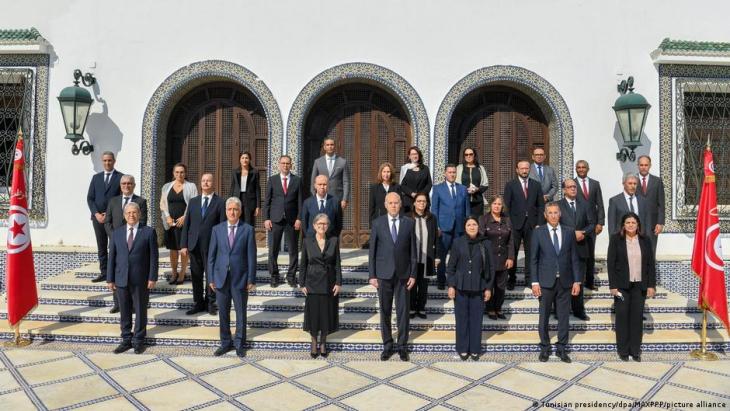 According to Mariam Abdel Baky and Olfa Lamloum, the president alone, with all the power in his hands, is capable of bringing about an end to austerity policies. "The upcoming state budget will reveal whether he really does want to live up to his commitment to 'the starving' or not." Pictured here: members of the Tunisian government appointed by President Kais Saied on 11 October 2021

Saied's approach is also undermined by the fact that his anti-corruption mantra is applied vertically. Put simply, any fight against corruption cannot be accomplished by a single all-powerful man with decrees. An authentic fight demands informed citizen action, something that can only flourish in a democratic space that delivers participation, accountability, plurality, and counterbalance.

Since the president dissolved Parliament in July, citizens have continued to take to the streets to protest and claim their rights to education, clean water, and employment. There were more than 400 protest actions in August and around 1,000 in September. Meanwhile, more than 12,500 Tunisians have reportedly arrived on Italian shores as irregular migrants in the past nine months. Young people are choosing to risk their lives crossing the Mediterranean to reach Italy in the hopes of finding a dignified life.

What threatens Tunisia today is not its parliament, which many Tunisians have come to ignore or despise since the 2019 elections. The omnipresent danger is the despair and dejection caused by the devastating social and economic effects of austerity policies.

While talks with the International Monetary Fund over a third loan since 2013 are suspended for now, the currency devaluation prescribed in 2016 has led to an increase in prices and an unprecedented inflation rate: estimated at 7.3% in 2018 and today still standing at 6.2%. The fact that the public learned about the government's negotiations of a $4bn loan only through revelations in international news outlets reflects the murkiness of the negotiations, staged in the absence of any mechanism of public accountability. 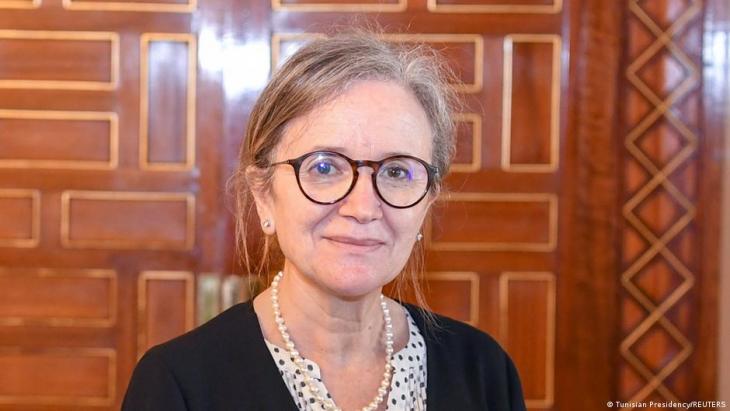 At the end of September, Saied appointed geology professor Najla Bouden Romdhane as the first female prime minister in the Arab World. While some feel she is an example of women's progress in Tunisia and could further the empowerment of women there, others fear her lack of experience and the fact that the president now holds all the powers in his hand will leave her little room to act

In confronting this crisis, Tunisia's civil society and social movements today more than ever before provide a glimmer of hope in bringing social questions to the forefront. The way out of this predicament rests on real participatory democracy that allows for the inclusion of citizens and those left behind in the implementation of public policies in guaranteeing access to healthcare services, adequate housing, clean water, education, and employment.

Civil society has not only confronted these questions, but the small victories achieved since 2011 are to a large extent due to the mobilisation and grassroots work of the organisations operating in this space.

The demands of the January 2011 revolution for social justice remain as valid today as they were then. Their satisfaction depends on a break with the austerity policies followed by the various governments since then. Today, the president alone, with all the power in his hands, is capable of bringing about an end to these policies. The upcoming state budget will reveal whether he really does want to live up to his commitment to "the starving".

Tunisia's economic and political instability and the increasing reluctance of Europe to take in job-seeking migrants is leading many Tunisians to head for sub-Saharan Africa in ... END_OF_DOCUMENT_TOKEN_TO_BE_REPLACED

Charting his own descent into extremism, former Moroccan jihadist Adil El Hasani reveals how he was ultimately able to extricate himself from the grasp of those peddling religious ... END_OF_DOCUMENT_TOKEN_TO_BE_REPLACED

The history of Jews and Muslims is far more entangled than you might imagine – but you have to listen out for it. In "Recording History", Christopher Silver takes us on a sonic ... END_OF_DOCUMENT_TOKEN_TO_BE_REPLACED

Welcome to the world of Al Qasar, where Arabic music collides head-on with punk and psychedelic to create something powerful and beautiful. "Who Are We" is a raucous, subversive ... END_OF_DOCUMENT_TOKEN_TO_BE_REPLACED

A conflict rooted in identity is currently gaining traction in Morocco. It began with demands to relieve the "burden" of Fusha (classical Arabic) by implementing a linguistic ' ... END_OF_DOCUMENT_TOKEN_TO_BE_REPLACED

The Women's Africa Cup this year in Morocco was a resounding success. The Moroccan team was the first Arab women's football team to qualify for a World Cup. By John Duerden END_OF_DOCUMENT_TOKEN_TO_BE_REPLACED
Author:
Mariam Abdel Baky and Olfa Lamloum
Date:
Mail:
Send via mail

END_OF_DOCUMENT_TOKEN_TO_BE_REPLACED
Social media
and networks
Subscribe to our
newsletter