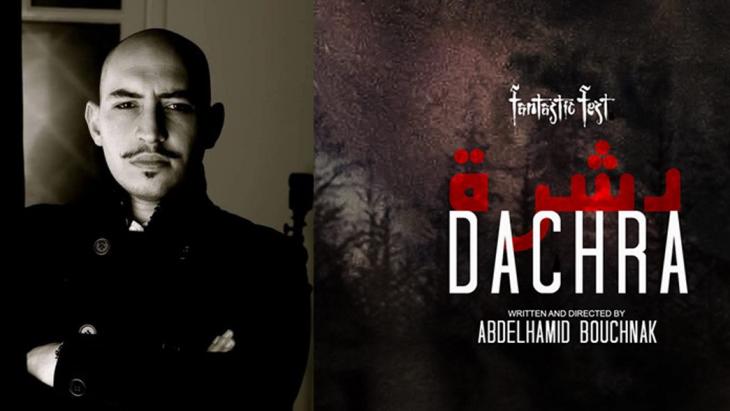 Long queues outside the cinemas and tickets like gold dust. Tunisiaʹs first horror film "Dachra" is currently smashing box-office records across the country. By Sarah Mersch

With audience figures already topping 200,000 in its first month, Tunisiaʹs first horror film has had young audiences in particular scrambling for tickets, breaking all box-office records in a country with a population of only 11 million and a mere handful of cinemas. The plot of "Dachra" is straightforward: three journalism students, Yasmine, Bilel and Walid are tasked with making a news report as an end-of-semester assignment. Their professorʹs only stipulation is that it should have nothing to do with the Tunisian revolution.

One of the three, it transpires, has recently come across the story of a mysterious woman named Mongia. Found with her throat half cut by the side of a deserted country road more than twenty years ago, Mongia is said to have been locked away in a psychiatric hospital ever since; whatʹs more, she never speaks a word, is aggressive and considered a witch by hospital staff. Thatʹs it then. With their project settled, the students set out to discover more.

When the hospital turns the trio away and denies the womanʹs existence, they decide on a change of strategy and travel to the place where Mongia had been found, a small village ("Dachra" in Arabic) in the northwest of the country that gives the film its name.

Upon their arrival at what turns out to be no more than a bleak cluster of houses around a dilapidated hotel deep in the woods, they are enthusiastically welcomed by one of the villageʹs male residents and invited to stay for dinner. The candlelit gathering soon proves rather unsettling, however, as they are joined at table by a group of silent, black-clad women and served a dinner consisting entirely of raw and unidentifiable meat. It quickly becomes evident that escaping this place will be no easy matter.

While successful horror films of recent decades, such as "The Blair Witch Project" have clearly influenced "Dachra", director Abdelhamid Bouchnak and cinematographer Hatem Nechi deserve a lot of credit for the rich visual look of the film created with limited financial resources. The camera plays a significant part in maintaining the unsettling tension throughout, as does a series of hidden clues to the source of the horror that often only become apparent in retrospect.

"Dachraʹs" box-office success in Tunisia is also down to director Bouchnak successfully creating his own frame of reference, thus allowing the film to transcend the genre classics. "Dachra" is not only the first Tunisian horror film, it also has horror that is genuinely Tunisian.

The gruesome rituals gradually uncovered by the journalists at the settlement all have their counterparts in real black magic practices in the country. Children are sacrificed to discover hidden treasure, people cursed by having their photos placed into the mouth of a corpse, the lips of which are then sewn up, the national dish couscous sieved through a dead manʹs hand, desires and curses written in blood.

Casting a critical eye on tradition

Beyond the disgust provoked by such scenes and their meaning within the genre, director Bouchnak, who is the son of well-known Tunisian singer Lotfi Bouchnak, wants the film to raise critical awareness of such historical practices. "Of course, these macabre rituals are rarely practiced these days, but they do still exist", he explains. Condemnation of such traditions is clearly something he sees as part of his responsibility. "Itʹs crazy! There are people here with Facebook profiles who still believe in witchcraft. They have absolutely no respect for other human beings."

On the trail of horror: the gruesome rituals gradually uncovered by the journalists at the settlement all have their counterparts in real black magic practices in the country. Children are sacrificed to discover hidden treasure, people cursed by having their photos placed into the mouth of a corpse, the lips of which are then sewn up, the national dish couscous sieved through a dead manʹs hand, desires and curses written in blood. The film evokes reminiscences of "Blair Witch Project"

He did not actually set out to make a horror film at all. "It just kind of turned out that way during the writing process. The genre practically forced itself on me," he reveals, though he does also admit to being a big fan of horror films. "Dachra", which was already screened at the last Venice Film Festival, is the thirty-something directorʹs first full-length feature, though he already has several short films and web series under his belt and has completed film studies in both Tunisia and Canada.

"Dachra" was shot with a young film crew, young actors and a small budget. For Bouchnak, this has made the Tunisian publicʹs interest in the film doubly satisfying. On the one hand, it has helped to pump a little money into the empty coffers of the production company. "It really helps to have the costs covered. Itʹs probably a first in the history of Tunisian cinema, too, to have box-office takings exceeding production costs." He is also proud that his film has been bringing young people back to Tunisian cinema.

The younger generation of Tunisians has increasingly been turning its back on the cinema and the classical Tunisian auteur films of recent years. It is easier to reach them with genre films, Bouchnak believes.

He is currently making a television series that is scheduled to be broadcast in Ramadan in 2019. After that he wants to get started on his next film project. "Probably not a horror film this time," he says, "but it will definitely be another genre film."

Arab women played a leading role in the protest movement of 2011. Since then, ongoing social transformation has had a considerable impact on their lives. What is their assessment ... END_OF_DOCUMENT_TOKEN_TO_BE_REPLACED

Recep Tayyip Erdogan, disappointed by the European Union’s reluctance to integrate Turkey into its ranks, has re-directed his country’s diplomacy toward the Maghreb and Africa to ... END_OF_DOCUMENT_TOKEN_TO_BE_REPLACED

The rollout of coronavirus vaccines in the Middle East and North Africa is already taking place on a massive scale, with the United Arab Emirates leading the way. Nevertheless, ... END_OF_DOCUMENT_TOKEN_TO_BE_REPLACED

Tunisia has launched a successful transition to democracy, but difficult economic and social times lie ahead. According to political scientist Said AlDailami, Europe should focus ... END_OF_DOCUMENT_TOKEN_TO_BE_REPLACED

Mass protests began in Egypt on 25 January 2011. They triggered the overthrow of long-time ruler Mubarak. Ten years later, many human rights activists and journalists are in ... END_OF_DOCUMENT_TOKEN_TO_BE_REPLACED

END_OF_DOCUMENT_TOKEN_TO_BE_REPLACED
Social media
and networks
Subscribe to our
newsletter