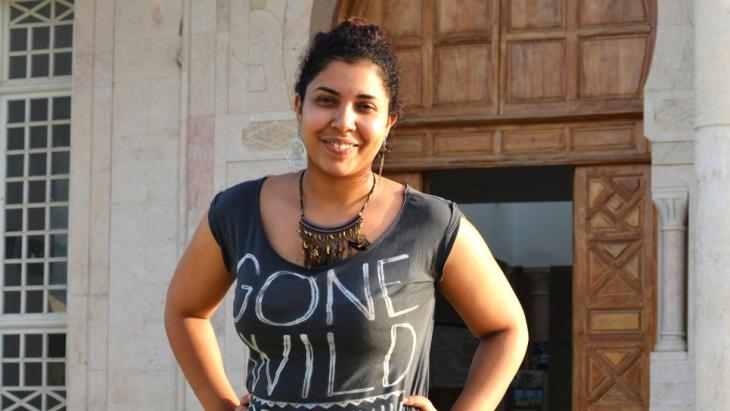 Rapping against sexism and Salafists

At the age of ten, she practiced breakdancing in a mosque and at 16, she began to rap. Boutheina El Alouadi is one of the few professional and politically courageous female rappers in Tunisia. This is where her dream came true – and yet she now would rather leave her country. By Julia Neumann

After Boutheina El Alouadi had asserted herself in the male-dominated rap scene of Tunisia, performed at international venues and even moved a Libyan MC to tears of admiration, she wondered if wouldn't have been better if she had moved to Sweden. Under the rapper pseudonym "Medusa", she was offered the chance to stay in Goteborg in June 2014. "I love my country and my family. And that is why I am returning to Tunisia," she said at the time. Today, she regrets her decision.

Boutheina sits in a cafe in the coastal city of Nabeul. At all the other tables, there are only men. The noise from the street intertwines with her words. And yet, she talks loudly. On the way here, a man followed her for a few hundred metres. Boutheina is used to having to assert herself.

Breakdance on a ceramic floor

By the age of ten, she was exchanging Lil'Kim, Beyonce and Tupac cassettes with friends. She learned the "power moves" by observing the older boys and she practiced on the hard floor of the mosque across from the school between prayer times. "The floor was covered with ceramic tiles. This helped us keep our footing while doing acrobatics," she relates. Many people considered her breakdancing together with boys to be haram – something forbidden. "Tunisians find it strange to see a girl with her head on the floor and her legs in the air." At the start of the millennium, there was no recognisable rap scene in Tunisia – and certainly no female players," says Boutheina.

Her father and her uncle are both rappers and MTV was always on at home. Diam's rapped about the social difficulties facing French women, while Tupac targeted the problems in the ghettos. Boutheina was 16-years-old when she wrote her first texts. "When we address a problem or a taboo in our society – that is what I call real hip hop. In all of my songs, I try and give an answer to these problems."

In her song "Lie of April," she raps about a women who rejects her husband after he has cheated on her: "For every liar in the world/We don't want you/We are strong women."

Her texts touch on topics ranging from the right to abortion, disadvantaged orphan children, to world peace. "My songs deal with all sorts of things – they are political, social, sentimental and feminist." Boutheina remains the only woman in Tunisia's male-dominated hip hop scene. She had, however, observed that other young women were attracted to the genre. She had even planned to record some songs with them, but then they suddenly gave up. "Many young men in Tunisia are sexists," claims Boutheina. "They tell me: 'Go back to the kitchen, care of your family, rap is not for women.'"

A change of scene: Cafe Tortuga. Here, Boutheina is well known. The cultural centre, where Boutheina first danced hip hop as a girl, is in clear sight. She was born and raised in Nabeul. At twenty and with a microphone in her hand, she rebelled against the social and political ills of her country. "I found myself in the middle of the revolution. I stood in front of the ministry and all of the snipers." She was arrested under her rapper moniker Weld EL 15 for her song Boulicia Kleb (″the police are dogs″) and later produced her own protest video. Here, she danced like the three monkeys who couldn't see, hear, or speak.

Boutheina initially believed in the revolution and wanted a better Tunisia – one in which art would be valued and her work appreciated. She was to be disappointed. "The only thing that has changed is that hip hop has become increasingly commercialised," she complains. The rappers on TV degrade women by calling them sluts and everything in their songs revolves around alcohol and drugs. "I believe that this is a societal problem – commercialism – leading to these bad commercial songs being held in such high esteem," says Boutheina.

Better to be free

No one in Tunisia wants to hear about their own problems. "There are still many ambitious rappers offering quality material, but they are hardly known in Tunisia." Even Boutheina has not yet been invited to a single Tunisian festival. "They only want the really popular performers in order to earn as much money as possible."

She wishes for a hopeful future for herself and her family. However, it is next to impossible to live from her inspirational hip hop, which one can hardly hear in Tunisia anyway. Unprofitable art. She did complete her studies in Tunis, but it is still very difficult even after the revolution to find suitable work. "I was offered a job for 350 dinar a month, that is about 170 euros. How can you ever make do with so little money?" complains Boutheina.

And so it happened that she recently applied for a visa to France. She has some friends there in the hip hop scene and they share their ideas and instruments with each other. It's a start, at least. And what about a contract with a record label? Under no circumstances! She would rather be free.

Home
Print
Newsletter
More on this topic
The Arab hip-hop sampler ''Khat Thaleth'': Looking for a third wayTunisian rapper Balti: "I was no good in school"Pop music and social protest in the Arab world: The echo of revolt
Related Topics
Arab music, Arabellion, Musical worlds, Tunisian Revolution, Women in the Islamic world
All Topics

"The people aren’t ready for democracy" has been the constitutional basis for Arab tyranny, its favourite slogan and its sacred narrative for more than a century. Yet, asks Khaled ... END_OF_DOCUMENT_TOKEN_TO_BE_REPLACED

A new survey by Arab Barometer adds numbers to the narrative that COVID has led to a harsher reality for women in the Middle East and North Africa. By Jennifer Holleis and Razan ... END_OF_DOCUMENT_TOKEN_TO_BE_REPLACED

"Coups are not only started by the military; they can be started by a civilian and completed by officers”, said Shady Lewis Boutros, an Egyptian novelist and writer who lives in ... END_OF_DOCUMENT_TOKEN_TO_BE_REPLACED

Tunisia's President Kaïs Saïed has assumed executive powers in his country in a highly controversial and possibly unconstitutional manner, fuelling fears of an impending ... END_OF_DOCUMENT_TOKEN_TO_BE_REPLACED

Arab women played a leading role in the protest movement of 2011. Since then, ongoing social transformation has had a considerable impact on their lives. What is their assessment ... END_OF_DOCUMENT_TOKEN_TO_BE_REPLACED

Recep Tayyip Erdogan, disappointed by the European Union’s reluctance to integrate Turkey into its ranks, has re-directed his country’s diplomacy toward the Maghreb and Africa to ... END_OF_DOCUMENT_TOKEN_TO_BE_REPLACED
Author:
Julia Neumann
Date:
Mail:
Send via mail

END_OF_DOCUMENT_TOKEN_TO_BE_REPLACED
Social media
and networks
Subscribe to our
newsletter