Skip to main content
Tunisian Society after the Jasmine Revolution

Between Optimism and Confusion

Following some three decades of dictatorship, Tunisia is in the grip of great uncertainty one month after the Jasmine Revolution. For a society in such dire need of reconstruction, this is a difficult situation to be in. Beat Stauffer reports from Tunis 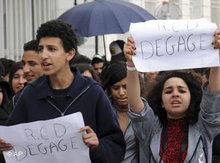 Since early February, Ben Ali's former party, the RCD, has been banned from all political activity; its offices have been shut down, and the Tunisian Ministry of the Interior has applied for the dissolution of the party

​​In Tunisia, the initial enthusiasm that followed the unexpectedly swift overthrow of the despised regime has now evaporated and the difficult reconstruction of society is in full swing. At political level, the first key changes have been made: the dissolution of the former single party, the RCD, and the creation of a commission to investigate the crimes of the Ben Ali regime.

Despite all the difficulties and the ever-present uncertainty, the changes look promising. According to opposition activist Moncef Marzouki, Tunisia has already covered about half of the long road that lies ahead of it.

This explains why the focus is now shifting to the current moral state of Tunisian society. After all, it is this state of mind that will play a key role in deciding whether the country manages to circumnavigate the numerous rocks and cliffs en route from a totalitarian regime to an open and democratic society.

Yet as great as the courage and determination of the desperate young people of Sidi Bouzid, Kasserine and Tala may be, other qualities are now needed to lead the Jasmine Revolution to its successful conclusion. 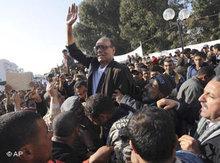 Celebrated as a national hero: the 65-year-old professor of medicine and opposition activist Moncef Marzouki

​​It is a sign of astounding political maturity that many men and women in Tunisia are now daring to ask themselves these questions, rather than allowing themselves to be carried away on a wave of euphoria; all the more so in that those taking stock tend to come to critical, and occasionally gloomy conclusions.

All are agreed that Ben Ali's rule caused long-term damage that cannot be corrected overnight. A president who had himself depicted ten thousand times over as the benevolent father of the nation, calling for "solidarity" with his hand on his heart, while at the same time looting and pillaging the country as best he could, will no doubt have brought this value into disrepute among many Tunisians.

The same applies to the concept of human rights, which the regime instrumentalised in a repulsive manner while subjecting thousands of political opponents to harassment, imprisonment and even torture. The damage to the younger generation in particular is likely to be immense, and it will take a long time for these misused terms to take on their original meaning again.

​​For Lamine Msali, headmaster of a high school in the provincial town of El Kef, the damage is immense. "We will be dogged by the mentality cultivated under Ben Ali for many years to come," he says. Msali diagnoses "inner decay" across society as a whole; a decay he says began in 1987 when Ben Ali came to power.

Corruption – now an everyday practice among lawyers, judges and police officers – exploded during this period, he says. He feels that traffic policemen who demand 20 dinars to leave people in peace are almost nothing in comparison to the "big swindlers" in Tunisian society.

Msali considers the situation in the education system to be dramatic. The standard of teaching has fallen immensely, he says, with illegal practices finding their way into many schools: teachers give private tutoring for cash in state school buildings, and apparently exam results can often be "improved" by bribery.

The trade unions, he says, have always been aware of these practices but have tolerated them. For him, that makes them partly responsible for the hopeless state of the education system.

Individual interests before the common good

Yet for Msali, the worst thing is the lack of orientation he sees in many young people. It will be very difficult, he says, to build a new society with these individuals. Such reconstruction calls for responsibility, public spirit and a willingness to place the interests of the country before those of the individual, he explains. He feels that these values are very weak in Tunisia today. As a result, Msali fears tough struggles over distribution in the months and years ahead.

Many Tunisian intellectuals take a less dramatic view of the situation but do diagnose similar problems. The Islam Studies scholar Amel Grami, a lecturer at the University of Tunis, is concerned that selfishness and a lack of public spirit (civisme) and decency are spreading.

​​Even ministers are coarsely insulted in television debates, she says, with questions occasionally becoming almost inquisitorial. According to Grami, many people in Tunisia no longer abide by the law, which has already caused major problems: houses are being built without planning permission all over the country and private individuals are simply appropriating state land.

Lawyer Ridha Fraoua confirms an increasing trend in society towards selfishness and materialism. For Fraoua, however, it is perfectly legitimate for people who have spent their entire lives in precarious material straits to call for higher wages and social welfare. Tunisian society will have to learn to deal with these newly expressed demands, he says.

Yet there are also signs of hope. A weekly "caravan of solidarity" has recently begun, leading from Tunis to the poor and marginalised regions of the country. Grami sees this as a sign that people in the rich capital city are aware of the deep rift dividing the country and are also prepared to get involved personally. Yet the road that lies ahead of Tunisia, she says, is very long.

Tunisia after Ben Ali
Whither Tunisia's "Jasmine Revolution"?
In his essay, Tunisian writer Mustapha Tlili reflects on the differences between the toppling of Tunisia's former President Ben Ali and the toppling of his predecessor, Habib Bourguiba, the secular nature of the recent uprising, and the likelihood of the Tunisian revolt triggering a domino effect in the Arab world

END_OF_DOCUMENT_TOKEN_TO_BE_REPLACED
Social media
and networks
Subscribe to our
newsletter