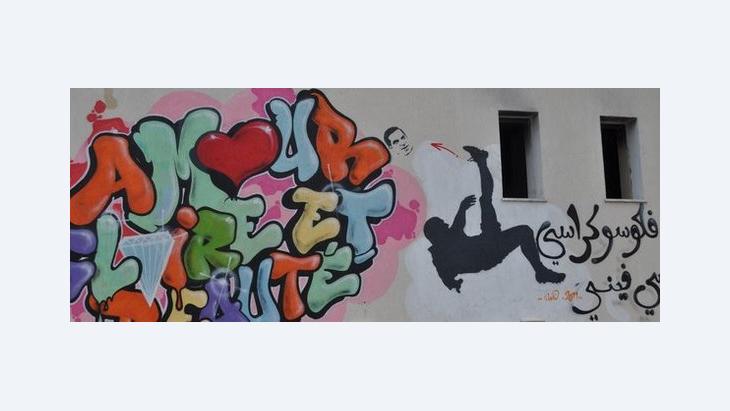 Tunisia's Art Scene after the Overthrow of Ben Ali

﻿Activism and art go hand in hand nowadays in Tunisia. The young and politicized artistic scene in the Mediterranean country has flourished since the dictator Ben Ali fled Tunisia in January. Sarah Mersch offers an overview from the capital Tunis

"We would have liked to do something similar long ago, but it would have landed us right in jail," says Selim Tlili, sitting on the terrace of a café in La Marsa, a suburb of Tunis, sipping a glass of tea.

From here, it is not far to one of the houses owned by the Trabelsi's, the family of Zein El Abidine Ben Ali's wife Leila. It was looted on 14 January and partially burnt down. Together with his artist friend Jaye, Tlili spent four days decorating the exterior of the house with metre-high graffiti. The words "Amour, Gloire et Beauté" (love, glory, and beauty) can be read in French, next to an image of a football player making an elegant overhead kick with a ball shaped like the head of the overthrown president.

"The flussocratie is finished," is emblazoned in Arabic next to the football player. It is a triple play on words, as flussocratie means the reign of money, but can also be translated as money and chairs. Tlili and Jaye no longer wish to see corruption and political posts for a lifetime in the new Tunisia.

"I was always free in my art," explains Tlili. Yet, gallery owners either refused to show or demanded different titles for some of his political works in order to avoid problems with the authorities. Once, Tlili was asked to paint a portrait of Ben Ali. He refused and was harassed by the police from that point on. 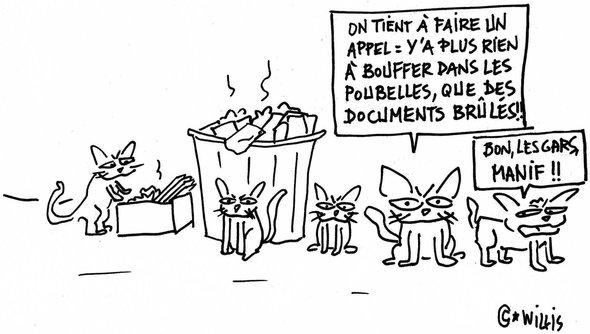 Political art as therapy: Sometimes the city's stray cats in Nadia Khiari's drawings call for a demonstration, because there is nothing more to eat from garbage bins. Instead, they are only filled with burnt documents

​​"It was never anything specific, just all kinds of trifles. But every roadside check was used to hassle me," he reports. Tlili is certain that if he didn't also have French citizenship in addition to Tunisian, he wouldn't have gotten off so lightly.

Making the graffiti on the house of the president's family was almost like going through psychotherapy for Tlili. He says that it gave him the opportunity to take symbolic revenge against the president. "While we were spraying, a neighbour came by and she said to us, 'You have taken something horrible and made something beautiful.' That was a wonderful moment."

Art as a kind of therapy – this is also how the drawings of Nadia Khiari came into being. The evening before 14 January, as Ben Ali was holding his last television speech and the whole of Tunisia sat tensely at home because of a curfew, she began to draw small caricatures. What emerged was a cat, commenting on current events.

"At first, this was simply a way for me to relieve the stress." Sometimes the city's stray cats call for a demonstration, because there is nothing more to eat from garbage bins. Instead, they are only filled with burnt documents. Another time, a cat gets riled up about a court ruling on censorship of pornographic Internet sites. "You can't take away my freedom to get an erection."

Nadia Khiari's provocative drawings are not always appreciated. "Nothing is sacred for me. I don't try to hurt anyone, but I allow myself the freedom to poke fun at everything."

Inspiration in the taxi 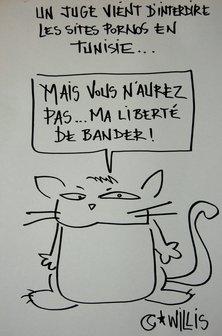 "You can't take away my freedom to get an erection": At the urging of friends, Nadia Khiari posted her drawings on Facebook under the pseudonym "Willis from Tunis" and thereby raised her profile

​​At the urging of friends, she posted her drawings on Facebook under the pseudonym "Willis from Tunis." Within a few days, her fan base mushroomed. Since then, the brash and blunt virtual cat, who bears the same name as Nadia's real house cat, has around ten thousand fans.

Khiari has already independently published a book of selected caricatures and organized an exhibition in her gallery Artyshow, located in a suburb of Tunis. Khiari finds her inspiration in daily life, in conversations with taxi drivers, students, newspaper vendors, and her neighbour.

Although she exhibited her work before the revolution as well, she could only convey criticism in a very subtle way. "An exhibition called 'Slumberland' and a picture titled 'Local Anaesthetic' can be understood by those who want to understand. It wasn't possible to go much further than that."

Nadia Khiari is pleased that there is finally movement in the young art scene in Tunis after the revolution. "I have met so much young talent making excellent work. None of them had dared to go public before the revolution."

Almost the only person who published political caricatures during the rule of Ben Ali did so anonymously under the pseudonym Z. Since 2007, his blog "Debatunisie" has featured writings and drawings critical of the regime.

Before the revolution, evil was out in the open

"My motivation was anger – against the political system." Z's trademark was biting caricatures portraying President Ben Ali and his family, which were quickly subject to censorship. From the patronage and corruption of the Ben Ali and Trabelsi families to the self-immolation of Mohamed Bouazizi – Tunisian politics offered the anonymous illustrator more than enough material. 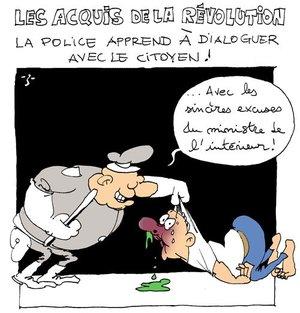 A bloody nose as a trademark of the revolution and the democratic transformation? A caricature by the blogger Z, probably Tunisia's best known opposition caricaturist

​​From the very start, Z intentionally wrote in French in order to reach a broader public. "I had the impression that no one abroad really understood what was taking place in Tunisia or the extent of the suppression."

Even though Ben Ali is no longer on the political stage, Z's mission is far from over. He continues to observe his country's path towards democracy with a good dose of black humour.

"The achievement of the dictatorship: The police learn to engage in dialogue with citizens" stands above a drawing of a policeman who gives a demonstrator a bloody nose and then immediately apologizes in the name of the Interior Ministry.

"Of course, I found it simpler before the revolution – evil was very easy to identify. The situation after 14 January has become far more opaque. It is extremely difficult to judge who is honest and who is merely attempting to profit from the situation."

This is also why he doesn't intend on revealing his identity. "It is impossible to know how democracy will develop in Tunisia or whether we will soon have an Islamist government or even a new dictatorship."

Tunisia is considered a paragon of the Arab Spring. Despite democratic reforms, however, a mood of political frustration and economic despair still prevails, particularly among ... END_OF_DOCUMENT_TOKEN_TO_BE_REPLACED

Equality in divorce, a ban on polygamy: reformers of Islamic family law have a clear agenda. They are exploiting the ambiguity of traditional jurisprudence. By Joseph Croitoru END_OF_DOCUMENT_TOKEN_TO_BE_REPLACED

Hassan Aourid is one of the most important political and intellectual figures in Morocco. In interview with Ismail Azzam for Qantara, Aourid outlines his vision of the decline of ... END_OF_DOCUMENT_TOKEN_TO_BE_REPLACED

The Arab world is one gigantic pressure cooker. For the most part the lid of repression is on, but it is boiling over with increasing frequency. Whether in Lebanon, Iraq or in ... END_OF_DOCUMENT_TOKEN_TO_BE_REPLACED

In his new film, award-winning Tunisian director Nouri Bouzid grapples with the traumas of women held captive by Islamist extremists, victims of the so-called ʺsexual jihadʺ in ... END_OF_DOCUMENT_TOKEN_TO_BE_REPLACED